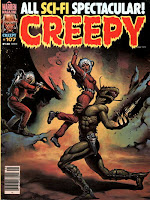 This issue is an all sci-fi special issue of Creepy. The cover is by Romas Kukalis. All the stories in this issue are uncredited, although the creators would be revealed in later issues.

First is "The Rubicon" by Pepe Moreno Casares (art) and Budd Lewis (story). The issue's best story, a legitimately scary one (a rarity for this part of Creepy's life), it features a group of astronauts sent to some ruins where a number of astronauts have dissappeared. There they make a major discovery regarding the origin of mankind.

Second is "Family Ties" by Val Mayerik (art) and Bruce Jones (story). Another very good story, with some really good art from Mayerik, it takes place in a world where animals are able to talk through mental powers. The story stars a dog, who is to be the representation for the animals when humans arrive. He travels around, meeting various animals and creatures, and finally meets the humans, who are astronauts. They are unable to understand his mental communication however, and plan to blow up the whole place due to the radiation that gave the animals these powers.

Third is "The World from Rough Stones" by Joe Vaultz (art) and Jean Michel Martin (story). A group of radioactive aliens arrive at Earth only to be destroyed due to the oxygen there. They leave behind ruins, what we know as Stonehedge. A very short story at only 4 pages long.

Fourth is "Stainless Steel Savior" by Leo Duranona (art) and Len Wein (story). A robot is dumped in the trash by the family that owns him when a newer model comes out. The robot initially stays with some homeless drunks but he has a vision of god and becomes a famous prophet who gets many followers. He is about to broker peace in the middle east when he is shot by one of his friends, who just wants to get drunk. The robot is dumped in the trash, his teachings are forgotten, and everything goes back to normal.

Fifth is "Quirks" by Walt Simonson & Terry Austin (art) and Bob Toomey (story). A group of astronauts come to a planet with a lot of dangerous creatures. They find one small monkey like creature who sleeps through everything, making them wonder how he is able to do this. They are surprised to hear that its not due to any special mental powers that he is able to ignore predators, but because he's inedible. This story would have a sequel in issue 112.

Last is "Mindquake" by Garcia Pizarro (art) and Jim Stenstrum (story). This issue's poorest effort, it is about a spaceship that has a man on it who has mental powers which cause harm to come to the ship. It is later revealed that the harm is actually from spies who have infiltrated the ship who are defeated. A dissappointing story from the usually dependable Stenstrum.
Posted by Quiddity at 7:02 PM