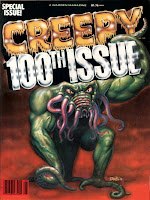 Creepy's 100th issue contains a whopping 8 stories. It starts with a cover by Bob Larkin.

First is "The Pit at the Center of the Earth" by Pablo Marcos (art) and Gerry Boudreau (story). A very poor story with some ugly as usual art from Pablo Marcos about a battle taking place on an oil ring. Yawn.

Second is "Professor Duffer and the Insuperable Myron Meek!" by John Severin (art) and Bill Dubay (story). Duffer of the title introduces Myron Meek to a top Hollywood agent and he makes it in Hollywood as a comedic actor, although he never speaks. It ends up that Meek is a robot. Meek has fallen in love with the robot from Metropolis, so they are able to find her for him, and he heads off for good with her. A nice comedic story with some good art from Severin.

Third is "Tale of a Fox" by Jose Ortiz (art) and Nicola Cuti (story). This story is about a Chinese princess, Ming Toi, who has the ability to transform herself into a fox. She is captured by her evil uncle Quang, who plans to replace her on the throne with his daughter Sun Li, who looks just like her. Ming Toi transforms into a fox however, and the guards mistake Sun Li for her, leading to her execution. This story would become a series in Vampirella a few years later.

Fourth is "Nobody's Home" by Joe Vaultz (art) and Cary Bates (story). As usual for Vaultz this story features alien creatures, this time creatures that live on the moon in an enforced enclosure. One alien tries to escape and succeeds, only to crumble to dust when he gets out.

Fifth is this issue's color story, "Winner Take All!" by Luis Bermejo (art) and Len Wein (story). A soldier plays cards with an old man and beats him so much that all the man has to offer is his beautiful female slave. The soldier heads through the desert with the slave, who never says a word. Various monsters start appearing and attacking him. Eventually it is revealed that she is the one summoning them, and that she has magic powers. She transforms him into an old man who is soon gambling her away as well.

Sixth is "Hell Hound" by Russ Heath (art) and Bruce Jones (story). A man finds an injured hound near his house and nurses it back to health. Soon he finds his enemies, such as his ex-wife and a man who fought him in a bar dead. It ends up that the hound is killing any enemies from his past. He goes to see a psychologist who wrote him a bad check in the past, but it ends up that this man has his own 'Hell Hound' too.

Seventh is "Wisper of Dark Eyes" by Auraleon (art) and Gerry Boudreau (story). A meteor crashes into the sea near a small fishing town. A woman watching it is given special powers which she uses to get her husband to kill the woman she's having an affair with. The special powers go away however when the meteor goes away, and the husband tears her eyes out. She jumps off a cliff to her death and he goes crazy.

Last is "They're Going to Be Turning Out the Lights" by Alex Nino (art) and Bill Dubay (story). This story tells of the panic that occurs when there is a massive blackout in a big city and the steps the government takes to keep things under control.
Posted by Quiddity at 4:14 PM