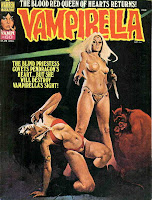 This issue of Vampirella starts off with a cover by Enrich, featuring the Blood Red Queen of Hearts versus Vampirella.

First up is "The Return of the Blood Red Queen of Hearts" by Jose Gonzalez (art) and Bill Dubay (story). The Blood Red Queen of Hearts, who lost her eyes to a demon in her first appearance (issue 49) tries once again to gather hearts so she can become Chaos's bride. She also seeks revenge on Vampirella by taking her eyes from her. Pendragon meanwhile meets a beautiful woman who steals his book on Chaos from him after knocking him out.

Second is "He Who Laughs Last... Laughs Best" by Carmine Infantino & Gonzalo Mayo (art) and Bruce Jones (story). Two men who are very competitive with playing practical jokes on one another are given money by an old man in a club they are a part of the more over the top their joke is. One of the men gets the other to kill himself after he is caused to believe that he caused a woman he is with to be hit by a car. But his death is faked, as she was working with him all along.

Third is "Riding Shotgun" by Luis Bermejo (art) and Gerry Boudreau (story). A trucker encounters a very beautiful young woman, 'Shotgun' at a truck stop. It is soon revealed that she is a succubus, as she preys on two other truckers while sleeping with them. Knowing full well who she is, our protagonist sleeps with her, but avoids kissing her and is able to keep himself alive. Some very attractive art by Bermejo here; Shotgun is probably the most beautiful woman in any of his Warren stories.

Fourth is "Wish You Were Here" by Jose Ortiz (art) and Bill Dubay (story). A pair of old men who used to write sci-fi stories long for the old days where they had been transported to another planet by a transportation beam used by a beautiful alien woman. Now old, they are unable to go there due to pollution in the sky. One of the men is about to kill himself, but is at that moment transported back to the alien world, presumably for good. Not a bad story, but with so much good stuff around it, the clear low point of the issue.

The issue concludes with "Fallen Angels" by Esteban Maroto (art) and Bill Dubay (story). The art for this story is sideways. Some very good, exotic art from Maroto on this story, which comes off as a Warren version of the Little Mermaid. A mermaid princess lives in an ocean paradise. She rescues a human man from a shipwreck and falls in love with him. She begs her father, who always taught her that humans were evil, to turn her into a human so she can be with him and he reluctantly permits it. She reunites with the man who treats her kindly at first, but she soon finds him with another woman. Realizing that men are evil, as her father taught her, she tries to return to the sea, but now a human, she drowns.
Posted by Quiddity at 6:22 PM