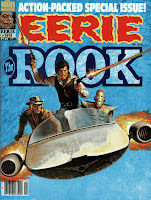 The Rook is cover featured for the first time in quite a while in this issue, a cover by Jordi Penalva.

First is the Rook in "Hickey and the Pirates" by Jose Ortiz (art) and Bill Dubay (story). Bishop Dane is shocked to find out that the Rook has to pay income taxes when he meets the Rook's accountant. Longing for adventure, Dane heads to the past where pirates reigned, and he encounters the accountant's ancestor. Like the last story, a tad long and overcomplicated, although Ortiz fills in nicely with the art.

Second is "The Horizon Seekers", a new series from Leo Duranona (art) and Duranona & Cary Bates (story). This long series was a pretty good one, although this is a weak first story. It takes place in the desert where a woman, Allison, takes a man, Jessie, prisoner. They are then captured themselves and brought to a city which they eventually escape from.

Third is the second and final story in the "The Shining Sea" by Alfredo Alcala (art) and Nicola Cuti (story). Humans arrive from Earth, but they are quite cruel, murdering many of the fish-people in order to take their gold. Our hero is able to fight them off, but at the cost of our hero's lover. Later more friendly humans arrive as well. Some very odd concepts with this series, but it ended up being an okay series.

Fourth is the second and final part of "Harrow House" by Jose Ortiz (art) and Bruce Jones (story). Our protagonist discovers that Gretchen is alive after all. Gretchen tells him her aunt has been drugging him and others who have come to the house, and taking their blood because she is a vampire. The aunt arrives and Gretchen runs off outside. The aunt reveals that Gretchen is the actual vampire, and that she has been gathering blood for her. Having made it outside in the sunlight however, Gretchen is killed. A very good conclusion, the strongest story here.

Last is "A Crack in Time" by Pablo Marcos (art) and Louise Jones (story). A couple goes back in time in order to study Cro-Magnon man. There they are confronted by Neanderthals who capture them, and eventually escape. Their time machine is destroyed, stranding them there, making them realize that they themselves are the Cro-Magnons who were the ancestors of modern humanity.
Posted by Quiddity at 9:11 PM