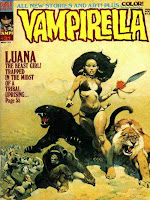 This issue was publicized as Frank Frazetta's return to Warren, although in actuality it was simply a reprinting of a cover that had been used for the movie "Luana", which is adapted inside. I've seen images on the web before of what was supposedly the original cover for this issue (see below), which is by Enrich and features Vampi by the Eiffel Tower. For whatever reason that cover was never used, although Vampi's face from that cover was used in the top left hand corner of the cover for Vampi's portrait for the next half a dozen issues or so starting with issue 32.

First is "The Betrothed of the Sun-God!" by Jose Gonzalez (art) and Mike Butterworth (story, as Flaxman Loew). This story continues from the prior one, where Vampi is the lover of a Sun God that can only appear once a month, but kills anyone who even appears to be attracted to Vampirella. At the same time Pendragon receives a message from a long lost relative and the two of them travel to Paris. The 'relative' is actually a con artist who cons people into putting her in their will, killing them soon afterwards. When a handsome poet writes a poem for Vampi the Sun God desires to burn the entire city of Paris to the ground, but Vampi convinces him instead to simply strike the con artist's house with lightning, which kills her and her entire group of henchmen. Vampi then decides to break things off with the Sun God. A very good story to start off the issue with. Gonzalez's art is very impressive.

Next is Pantha in her second story, "Family Ties" by Auraleon (art) and Steve Skeates (story). In this story Pantha goes home to see her boyfriend but he could care less what she has to say and after slapping her she turns into a panther and kills him. She then goes home to see her 'parents', asking them who her real parents are so she can find out what is happening to her. They instead beat her, so she once again turns into her panther form and kills the both of them.

Third is "The Truth!" by Fernando Fernandez (art & story). In Spain a captain in the military is brought before a group of judges, accused of Satanism and the murder of his wife and her lover. The captain tells of how he returned from the war to find his wife acting strangely, his sons sent away and only two mysterious servants there. That night while sleeping with his wife he is drugged, but wakes up hours later to find her gone. He heads to the basement where he thinks he'll find her with a lover, but instead finds her and her two servants eating a corpse. Shocked by what he sees, he kills the two servants and chases his wife through the woods, but she escapes in a flying saucer which flies away. None of the judges believe him and sentence him to death in the bonfire. The strongest story of the issue, with amazing art by Fernandez and a very spooky atmosphere. Whether the story the captain is telling is the truth or not is unknown. The inclusion of the alien aspect on the second to last page is quite odd though, something Fernandez would do again in the story 'The Whitfield Contract' in issue 42.

Fourth is "The Woodlik Inheritance!" by Richard Corben (art & story). A woman returns to the home she grew up in in Maine, where she finds that her mother has passed away. Her brother is acting very strange, telling her that the father they never knew is alive and that he has been eating only raw meat the last few weeks. They head to the basement, where they find their father, a horrific monster, who is eating the corpse of their mother. The brother battles the father and they both end up dying. The sister departs the house, which burns to the ground, eating what is left of her brother. A pretty good, odd, story, although the color is a little too dark at times.

Yet another solo story is up next, this time by Jose Bea, with "The Strange, Incurable Phobia of Mad Pierre Langlois!". 'Mad' Pierre is a man who is both afraid of and absolutely despises flowers. This is due to his youth, where his step mother showed him no love, instead paying all attention to her flowers. She then told him that her flowers would curse him until the day he dies. The curse finally comes to fruition when his son is born and ends up being a half human, half plant freak.

Last is "Luana" by Esteban Maroto (art) and Doug Moench (story), an adaption of the film of the same name. A group of archeologists in Africa are attacked by a group of African tribesmen. Only one of the men, named George, survives, when Luana, a beautiful woman living in the jungle comes and saves him, healing him from the poison arrows that struck him. Returning to civilization, he meets a woman, Isabelle Saxon who is searching for her father, who crashed in the jungle years before with his wife and Isabelle's half-sister (who is actually Luana). An old friend of her fathers, who is involved in drugs with the tribesmen becomes involved, and seeks to kill them, but is outsmarted by Luana, who leads George and Isabelle to the plane crash, where they find a diary that tells the truth about her father's friend, who ends up dying when he struggles with the tribe leader he was allied with.
Posted by Quiddity at 4:07 PM