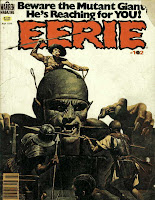 Sanjulian provides an odd cover for this issue. Most of it is okay, but there is no background whatsoever, just white space. A different style for this issue only, featuring mostly stand alone stories.

First is the Rook in "Terror of the Spaceways" by Lee Elias (art) and Bill Dubay (story). This story was Elias's Warren debut and its quite impressive, a large improvement over the art in prior Rook stories. Elias would for a while do the Rook's stories once the character got its own magazine. This story, which is continued in the next issue, was originally part of a large story that had been split in two after Jim Warren (thankfully) demanded that Dubay reduce the size of the Rook stories. In this story the Rook, upset over the government cutting funding for NASA heads into the future to find something to impress the government. A battle is occuring however, and at the end of the story he comes across a partially destroyed ship, looking for survivors. Ironically enough Joe Brancatelli's 'The Comic Books 'column discusses this very story (clearly before the decision to publish it had occured), with Bill Dubay talking about how he does not want to split the story in two parts for publication.

Second is "Siege", the latest "Horizon Seekers" story. Art is by Leo Duranona and story is by Duranona & Cary Bates. In this story Allison and Jesse are pursued by the giant throughout the castle. It eventually gets its hand stuck in a tower within the castle. Unfortunately for them, an even larger menace, a huge army of creatures seems to be coming from the horizon.

Third is "The Earthquake Stick" by Jose Ortiz (art) and Budd Lewis (story). This story tells of a young boy in an orphanage who is abused by the head of the place as well as his fellow orphans. He has a secret friend however, an alien creature that he is able to summon with a small device he has. Eventually he finds that he can use his fellow orphans as food for the creature.

Fourth is "Ophiophobia" by Martin Salvador (art) and Bill Dubay (story). This story features a man who is deathly afraid of snakes. The story flashes back to his childhood and how his fear in snakes got started. Eventually he gets sent to war in Vietnam, where is he is captured by the enemy and thrown into a pit filled with snakes.

Fifth is "Tracks" by Pepe Moreno Casares (art) and Roger McKenzie (story). This story takes place around a winter cabin where a man's wife dies and her corpse is eaten by some unknown menace. He goes outside trying to hunt it and eventually passes out in the snow.

Last is "Neatness Counts" by Joe Vaultz (art) and Jean Michel Martin (story). This short story with no dialogue features aliens coming to the moon, finding what the astronauts left there, and cleaning it all up, thinking it is trash.
Posted by Quiddity at 4:14 PM

Thanks very much for this. I used to have this issue when I was a kid. The Horizon Seekers story always stuck in my mind, especially the horde of lemming-like creatures.

Last night I was watching Sergei Eisenstein's Alexander Nevsky. In in there is a long scene of the Russians standing in a fortress with an army of Germans marching towards it in the far distance. This totally reminded me of this story, which I had not thought of in years. I took a screenshot of the scene in the film, but would have to see the actual panels to see exactly where the visual similarity was. I know it's there!