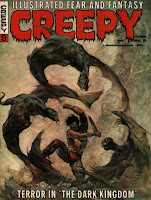 Posting another issue today to make up for missing yesterday.

This classic issue of Creepy features a cover by Frank Frazetta featuring a swordsman fighting off 3 vampire creatures. The frontis is "Creepy's Loathsome Lore" by Roy Krenkel.

First is "Dark Kingdom!" by Gray Morrow (art) and Archie Goodwin (story). A Spartan, Argo, finds himself in hell, battling various winged creatures, snakes and others. He's able to escape from Hades and live, with a scar on his back as a souvenier. As usual, great art from Morrow.

Second is "The Castle on the Moor" by Johnny Craig (story & art, credited to Jay Taycee). A group of tourists in a castle find themselves under attack by a werewolf, the son of the castle's owner. Soon only two are left, but are able to kill the werewolf with a silver bullet. One of the survivors reveals himself a ghoul however, and kills the last remaining person so he can eat her.

Third is "Adam Link's Vengeance" by Joe Orlando (art) and Otto Binder (story). This story continues from the prior one, where Adam was thrown off a cliff by Eve, who was possessed by a helmet she was wearing. Adam makes it to civilization, gets repaired, then takes on Eve in a new robot body. He defeats her, but ends up killing her. The man possessing her falls off a cliff soon afterwards.

Fourth is "Overworked" by Wally Wood & Dan Adkins (art) and Archie Goodwin (story). This story, which was Wood and Adkin's Creepy debut is about a comic book artist who is finds himself plauged by the monsters from the stories he creates. He tries to stop, but keeps getting more jobs and finds himself in horrific situations. Eventually he becomes trapped within his own strip.

Fifth is the second part of "The Coffin of Dracula" by Reed Crandall (art) and Archie Goodwin (story). This is a continuation from a story started in the prior issue. A man who had sat in Dracula's grave becomes Dracula himself. The story surrounds a number of men pursuing him, who eventually are successful in destroying him.

Sixth is "Out of Time" by Alex Toth (art) and Archie Goodwin (story). A mugger kills his victim, and is under pursuit from the police. He manages to escape using a portal which brings him to the 1700's. A man there tells him that he created the portal and wants to switch places with him. They do so, but our protagonist finds himself in just as bad a position as he's burned at the stake for witchcraft, which the person he replaced had been performing.

Last is "The Spirit of the Thing" by Steve Ditko (art) and Archie Goodwin (story). It features a professor who hypnotizes a student of his, resulting in his spirit leaving his body. The professor then steals the student's body, as his is about to die. The student's spirit, now bodiless, steals the professor's corpse from the graveyard and uses it to brutally beat to death his own body (with the professor's spirit) until the professor is forced to leave. Outside of Collectors Edition from the next issue, Ditko's best story for Warren.
Posted by Quiddity at 9:10 PM