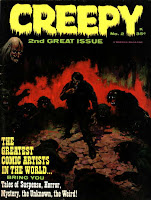 This classic issue of Creepy was from when the magazine was top notch across the board, great artists, great stories, very few flaws in these early issues. This cover is by Frank Frazetta, his first for Warren. Angelo Torres provides a one page Uncle Creepy intro for the frontis.

First is "Fun and Games!" by Joe Orlando (art) and Archie Goodwin (story). This story surrounds a middle aged couple who hate each others guts. At a carnival the husband participates in a game where he fires upon a model of his wife. When he gets home, he finds that she is dead. He heads back to the carnival, where the carnival barker he met before leads him through a door, where his wife is, who shoots him. A rather confusing ending to this story.

Next is the one page "Creepy's Loathsome Lore" by Bob Lubbers (art), in his sole Warren apperance. This feature focuses on vampires.

Next is "Spawn of the Cat People", the cover story, by Reed Crandall (art) and Archie Goodwin (story). A hunter comes across a panther that has murdered a man in the woods. He comes across some other men that have tied up a young woman. He frees her and runs off with her, despite their warnings that she's not like them. The hunter soon suspects that she has the ability to turn into a panther and shoots her. But when he finds the men he met before they reveal the truth, that in their town she was the only one who could not tranform. They then transform into panthers and kill him.

Third is "Wardrobe of Monsters" by Gray Morrow (art) and Otto Binder (story). For some unknown reason Angelo Torres handles the final page. Five men find a number of sacrophoguses in a pharoah's Egyptian tomb that house various monsters including a vampire, wolf man, devil and Frankenstein monster. One of the men, a translator finds the ability to transfer himself into these monsters. He does so, killing his various partners in monster form so he can get all the credit. He also destroys the mummy of the pharoah, fearing that he also has the ability to transfer into the bodies. However when he occupies a monster to kill his last partner, the pharoah's spirit, released by the destruction of his physical body, seizes the man's own body, trapping him in monster form for good.

Next is the one page "Creepy's Loathsome Lore" by Frank Frazetta (art). This feature focuses on werewolves. It was one of Frazetta's very few interior art jobs for Warren.

Fourth is "Welcome Stranger" by Al Williamson (art) and Archie Goodwin (story). Two men from Hollywood that work in the movie industry come across a town where they find some strange events occuring. They soon encounter some ghosts. It ends up all being fake, an act by the townfolk who want a movie filmed there, but their work had resulted in frightening the two men to death

Fifth is "I, Robot" by Joe Orlando (art) and Otto Binder (story). This is the first story in the Adam Link series that ran throughout many of the early issues of Creepy. The story was originally written by Binder and his brother, and had actually been partially adapted before in EC comic's Weird Science Fantasy 27 - 29, which incidently enough was also drawn by Joe Orlando. This story introduces Adam, who is a robot created by the kindly scientist Dr. Link. Throughout the early part of the story we watch Adam's development from a blank slate to an intelligent creature. Unfortunately one day Dr. Link is killed accidently and Adam is seen there by the housekeeper, causing his death to be blamed on him. Adam is forced to go on the run and hide from the humans pursuing him.

The issue concludes with "Ogre's Castle" by Angelo Torres (art) and Archie Goodwin (story). An extremely good art job from Torres here, arguably his best job for Warren. A knight heads to a castle that is rumored to be where his younger brother dissappeared. Inside he finds an ogre who has captured a beautiful young woman. He fights off the ogre's various minions, then saves the woman. On his way out the ogre confronts him, and the knight kills the ogre. The ogre's corpse transforms into his younger brother as soon as he is killed however. The woman, now revealed to be a sorceress, transforms the knight into an ogre, to be used to guard the castle like his brother had before.

Of special note is the subscription ad at the end of the issue, drawn by Jack Davis. This ad would eventually be transformed into the cover for Eerie #1 about a year or so later.
Posted by Quiddity at 8:56 PM