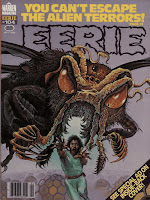 Kirk Reinert provides the cover for this issue of Eerie, featuring the new serial Beastworld.

First is the Rook in "The Trouble With Tin Men". Art is by Jim Janes & Alfredo Alcala while story is from Bill Dubay. Think of the usual cliches in the Rook storyline and this story has it. Rook going into the future for another adventure, telling Dane to stay there, and Dane heading off on another adventure with Manners yet again. Yawn. After the same storyline 15 times this is getting rather dull. Notable is that the Time Castle is destroyed, apparantely stranding Dane and Manners in the time they have gone to.

Second is the second part of "The Trespasser", in "Dusk" by Paul Gulacy (art) and Don McGregor (story). Dr. Cavanaugh is thrown in a prison in the basement where he finds Kelsey, the man he had seen captured before. Kelsey reveals that the Cope's house is built on a site where nuclear waste had been kept, the reason for the family's illness. Rebecca soon arrives and lets them out. As they are crossing a bridge one of the Cope family's guard finds them and a fight ensues in which the bridge is destroyed. Luckily Cavanaugh is able to throw the man into crocodile infested waters, saving himself and Rebecca. A good continuation to this story with some fine art by Gulacy and shockingly enough a good story from McGregor that doesn't go overboard with his usual polical ramblings.

Third is "City of Shadows" by Leo Duranona (art) and Jean Michel Martin (story). This story is told mostly through photographs of clay figures and toys. It features a group of people traveling through a post apocalyptic landscape looking for a mysterious city, which ends up being Manhatten.

Fourth is "Beastworld", a new series from Pablo Marcos (art) and Bruce Jones (story). A man, Tyler, and his friend Monica come across a giant beetle while flying in a ship. They meet Peter Thomas and his wife, Ruth. Peter has an inferiority complex with Tyler from their time in school together. He drugs our two heroes, but then without any explanation Tyler ends up with Ruth and Thomas ends up with Monica, seperated from each other. They fight off some giant bugs while arguing with each other. A rather poor start to a long running serial with Marcos art, an guy whose style I've never been too fond of. A poor site in a mostly good issue.

Fifth is the second part of The Open Sky, "Vladimir" by Jose Ortiz (art) and Bob Toomey (story). Moonshadow and Arianne come across a two headed man who had a hot air balloon stolen from him by Francois, the head assassin that Moonshadow is after. After convincing the two headed man to let them use their hot air balloon, they head through the sky, and are eventually seized by the winged people from the previous story, who drop Moonshadow and Arianne into the ocean.

Last is "Temple of the Ravengers" the latest story in the Horizon Seekers series. Art is by Leo Duranona, while story is by Duranona & Cary Bates. Allison and Jesse travel through the desert with Merlin and find some ruins of a mansion, leaving Merlin behind to rest while they explore. Inside they find a group of women cannibals that capture them. By convincing the cannibals that she is ill, Allison is able to start some infighting, and she and Jesse are able to escape.
Posted by Quiddity at 4:57 PM