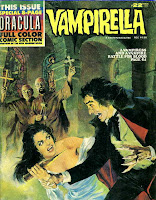 A pretty good issue from early in Bill Dubay's era. The cover artist is uncredited, so its a mystery who actually did it. I've seen it credited to both Enrich and Auraleon, and even Warren expert Richard Arndt isn't sure who did it. Hmm. The frontis for this issue is a two page feature, "Silent Night, Unholy Night" by Bill Dubay.

Up first is "Hell From On High" by Jose Gonzalez (art) and Steve Englehart (story) Englehart was a pretty good writer who took on Vampirella for a very short period of time in 1973, doing only three stories. The story features Vampi & co seeking out the true killer of Conrad Van Helsing's brother since by this point its been proven that Vampi wasn't responsible. They head to the snowy mountains where they meet a priest and the suspected killer, but it ends up that the killer was actually under the priest's control, and Vampi is able to defeat him. Pretty good story, a rarity for Vampirella!

The final Tomb of the Gods story is next, "Orpheus" by Esteban Maroto (art & story). The story features the poet Orpheus going to hell to reclaim his lover Eurydice. Pretty good art by Maroto but not that great a story.

Another solo Maroto story is next, "The Viyi". This story, which was originally printed in Europe in the Dracula anthology is the first full color story to be printed in a Warren mag. It was also printed at the same time in Creepy 51. The story features a man coming to destroy a beautiful woman who has become a vampire. He becomes enamored with her looks however and she awakens and turns him into one too.

Next is "The Sentence" by Jose Bea (art) and Steve Skeates (story). A thief steals a purse and runs into an old house when another man chases him. There he finds a head on a table which is he touches, which results in his head appearing on the table and the head getting to leave the house as part of a full body. An odd story which is very similar to the story Head Shop from Eerie 39, which was also drawn by Bea.

"Cry of the Dhampir" is next, a terrific vampire story by Auraleon (art) and John Jacobson (story). The story features a pair of vampires on the run from a 'Dhampir', a human with vampire blood who has the power to easily destroy vampires. Although the Dhampir ends up being killed when mistaken for a vampire by a mob, his twin sister, also a Dhampir gets to defeat the vampire once and for all.

The issue ends on a high note with "Minra" by Felix Mas (art) and Ed Newsome (story). A psychic explosion of hate suspected to have come from another dimension wipes out 3/4 of humanity. Psychic mutants start appearing among the population, who have the ability to set off incidents of hate and violence, so people band together and take them out. The story focuses on a pair of men heading after a teenage girl, Minra, who is accused of being one of the psychic mutants and causing an incident. One of the men does come across her, who explains that there never were any psychic mutants, hatred among humanity reached a boiling point and they accused people of being mutants as a scapegoat. Alas, the other man comes along and kills her and the story ends. Definately one of Mas's high points and a terrific story from Newsome in his sole Warren appearance.
Posted by Quiddity at 3:49 PM