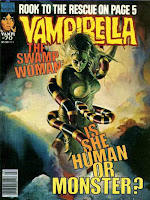 A fairly good issue of Vampirella, starting with a rare cover from Ken Kelly.

Up first is Vampi's story, "Ghostly Granny Gearloose" by Gonzalo Mayo (art) and Bill Dubay (story). This story, continued from the previous issue, features Vampirella captured by the Granny of the title. Pendragon, along with the Rook and his grandfather (who at the time were prominent characters in Eerie who I have yet to cover on this blog) come to the rescue.

Second is "Mask of Ugin", with art by Jose Ortiz and story by Nicola Cuti & Gerry Boudreau. The story features a murderous mask that kills a young woman. The store's owner discovers her mother in law is responsible for the murders and kills her, but her dead husband, having used the mask, arrives and kills her so they can be together in death.

Third is "Swamp Lovers" by Leo Duranona (art) and Bill Dubay (story). This interesting story features a tentacled monster that lives in the swamp that is able to convince an old man that it is a beautiful woman by changing its appearance. The monster is eventually killed by hunters however, leaving the old man all alone.

Fourth is "Reality Twice Removed" by Ramon Torrents (art) and Gerry Boudreau (story). A rather convoluted story with tons of dialogue, featuring a husband and wife arguing over vacation plans while political revolution and nuclear blasts occur on the news.

Last is "The Terrible Exorcism of Adriennes Pompereau!" by Auraleon (art) and Luis Vigi & Bill Dubay (story). This story, originally intended for the never published Warren magazine "Yesterday, Today... Tomorrow", is similar to the movie the Exorcism, where a young girl is taken over by a demon. The demon is expunged and revealed to actually be an alien, while the priests involved are also revealed as aliens, helping mankind.
Posted by Quiddity at 4:50 PM