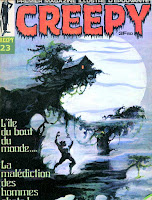 A pretty good cover for this issue by Tom Sutton, featuring a werewolf and a house on a cliff. This issue's frontis is "Creepy's Loathsome Lore" by Tony Williamsune (art) and Bill Parente (story).

Up first is "Way Out!" by Donald Norman (art) and James Haggenmiller (story). Its about a druggie who wants more money, so he decides to do a painting of evil. But he can't think of a model so he steals and gets even more drugs, which brings him to a world where he meets none other than Satan himself.

Second is "Gargoyle", a reprint from Creepy 6. The art is by Angelo Torres and the story is by Archie Goodwin & Roy Krenkel. A man seeks to find the power to turn stone into gold. He meets a mysterious dwarf who is the responsible for the deaths of multiple powerful men. He gets the dwarf drunk, who reveals how to make gold out of stone, so he pours it on a stone gargoyle. Only the dwarf actually told him how to turn the stone into life, and the gargoyle kills him!

"Jack Knifed" is third, by Barry Rockwell (art) and Bill Parente (story). It features a Jack the Ripper style killer whom a man suspects is himself, as he thinks he has multiple personalities. When he reveals this to his wife however, the truth is revealed, it is actually she who is the killer!

The cover story, "Quick Change" is by Tom Sutton (art) and Bill Parente (story) and features a werewolf who discovers that the town is going to kill him by stabbing him with silver. He works on making himself immune to silver, only it ends up turning him back into a human at the full moon, whom they are easily able to kill.

"Rude Awakening" by Alex Toth (art) and Archie Goodwin (story) is next, about a man who keeps having dreams of a glasses wearing man attacking him with a knife. He's so freaked out by them that he falls out a window and is brought to the hospital, where he faces none other than the glassed man! This story is originally from Creepy 7.

Last is "Cat Nipped" by Tony Williamsune (art) and Bill Parente (story). The story features a hunter in pursuit of a white panther, who ends up being a tribal queen. He battles her and manages to win by attacking her with silver teeth.
Posted by Quiddity at 11:48 AM