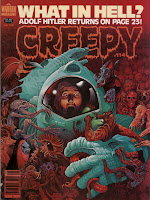 Back after a week off! The cover to this issue featuring an astronaut being overrun by demons is by Kirk Reinhart.

Up first is "Rats" by Pepe Moreno Casares (art) and Bob Toomey (story). The story surrounds an old man who sells liquor who has befriended a number of rats. During his travels through the streets he kills someone to provide as food for them!
Next is "Charnal Combat" by Danny Talerno (art) and Pierce Askegren (story). Another in a long line of very boring swords & sorcery stories. Not much to talk about here.

After that is the cover story, "Heat" by Leo Duranona (art) and Gerry Boudreau (story). In contrast to the dull first two stories, this is quite an interesting one surrounding three astronauts, all of whom have done some bad deed in the past, coming upon a civilization on Venus that includes Hitler, Jack the Ripper and other various evil well known men. The astronauts eventually realize they are in hell. The last one is able to escape from there by doing a good deed, telling Hitler that he loves him.

"Small War" follows that story, with art by Jim Starlin & Pablo Marcos. Story is by Roger McKenzie. Another boring story, featuring a war between regular humans and very tiny people. Particular focus is on a young boy who had befriended them but finds himself caught up in the conflict as well.

Fifth is "The Reaper" by Alex Toth (art) and Archie Goodwin (story). Quite a good story, featuring dual storylines. In one, an old man curses the world upon finding he has cancer and gets quite upset that insignicant people who haven't done as much as him to help others will continue living. The second storyline focuses a government scientist in a small pox lab being visited by an agent, who explains the guards they have against preventing an outbreak. The stories come together towards the end as its revealed that the old man works in the lab and is able to escape with a sample that he plans to unleash upon the world.

Last is "An Android Affair" by Auraleon (art) and Mark Laskey (story). A man with severe social problems in an institution is provided with a female android to be his companion. Her companionship helps him become more of a normal person but he loses it when finding out she's gonna leave him to help another man. When his doctor threatens to destroy her, he stops his tantrum and submits to the institution's custody once more.
Posted by Quiddity at 6:56 PM