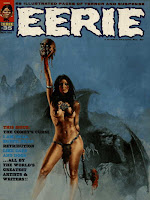 A terrific cover for this issue of Eerie by Enrich. Unfortunately most of the stories are only so-so. The frontis for this issue is "Eerie's Monster Gallery: Monster Sightings!" by John Cornell.

Up first is "Retribution" by Steve Englehart (art) and Englehart & Gardner Fox (story). It features an army that kills a priest in a snake chamber. The priest comes back to life due to the snake god's powers and seeks revenge.
Second is "The Comet's Curse!" by Frank Brunner (art) and Buddy Saunders (story). The story features a prisoner who tells his captors that a comet will come and curse them while he will live forever. All of the soldiers but one die, and chaos runs supreme in the city. The prisoner escapes and the last soldier is killed when a ceiling falls on him. Thousands of years later the soldier's body is dug up and comes to life, killing the prisoner.

Third is "The Tower of the Demon Dooms!" by Mike Ploog (art) and Gardner Fox (story). It features a man whose lover is killed, but brought back to life by a sorcerer. He kills the sorceror and claims her back, but she ends up being a vampire. So they can stay together they summon a demon to bring them to hell, but he is forced to be a vampire there as well.

Fourth is "I Am Dead, Egypt, Dead" by Victor De La Fuente (art) and Doug Moench (story). The story is about three archaeologists, Jim, Diana and Ray who find a tomb filled with treasure. Jim and Diana conspire to kill Ray and take all the treasure for themself. They do it by inducing a heart attack when Jim dresses up as a mummy. Only when the two of them head into the tomb Ray ends up not being dead after all and dressing up himself as a mummy, kills Jim. Ray and Diana having been together laugh about their plot, but end up dying when they drink water that Jim had poisoned in their canteens.

Fifth is "Cats and Dogs" by Jerry Grandenetti (art) and Bill Dubay (story). A man comes back from the war to stay with his parents and brother, whom he always fought when they were younger. Everyone in the town is afraid because of a werewolf that has been around. The brother ended up being the werewolf, but the soldier is a leopard man and the two battle it out.

Last is "Money" by Sanho Kim (story & art). The story features a man obsessed with money who meets an old man on the mountain who warns him to look, but not take it. The man comes across some money but others want to take it from him so he goes to the mountains himself where he stays alone permanently.
Posted by Quiddity at 5:50 PM