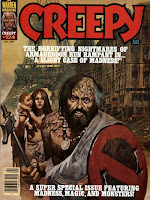 An average to above average issue of Creepy. It features a pretty good cover by Jordi Penalva. Rudy Nebres takes care of another average at best one page feature of Uncle Creepy.

First up is "Malphisto's Illusion" by Alexis Romeo & Alex Toth (art) and Nicola cuti (story). During this period of time Toth did inking for a number of different artists, creating a rather interesting dynamic. This story features a man trying to discover how a magician, Malphisto, is able to decapitate women and bring them back to life in his act. As it turns out, he's actually decapitating a twin for real and showing her sister to the crowd!

The story's best issue is "Cult" by Martin Salvador (art) and Archie Goodwin (story). The story features four men going after a cult leader who has lured many young people into his cult, including the daughter of one of the men. They reach the cult's compound which results in a blood bath in which many of the cult members and two of the men were killed. It ends up that one of the men actually is the cult leader himself, and seeked this event in order to make his members martyrs. Having impregnated the man's daughter, he tries to get the last remaining man to kill her, but he instead kills the cult leader and lets her live.

"Paydirt" by Carmine Infantino & Alfredo Alcala (art) and Roger McKenzie (story) is about a gold prospector who kills his partner in a cave once they find gold. He returns years later to claim the gold only for his partner to be back from the dead, seeking revenge.

Fourth is "Mayhem Museum" by Adolpho Bullya (art) and carl Wessler (story). This was Bullya's sole Warren story. Its about a man who flees his country with a lot of stolen gold and finds a man who plans to hide him and his lover in a museum by freezing him. Only the museum owner has different plans and immediately thaws the woman and plans to take the gold himself. He is eventually found out by a visitor to the museum however, who unfreezes a lot of frozen criminals, who seek revenge.

"The Prometheus" by John Garcia & Rudy Nebres (art) and Rich Margopoulos (story) is fifth. A rather poor story about a spherical craft that heads to Earth, is almost destroyed, but ends up getting there to deliver various wildlife. Yawn.

Last is "A Slight Case of Madness" by Herb Arnold (art) and Bill Dubay (story, as Will Richardson), about an alien who is going crazy because he's the last one left on his world. As he's about to kill himself, other aliens arrive and save him just in time, and plan to take him away with them to visit other worlds.

Goodwin's, Wessler's and Cuti's stories are fairly good while Dubay and McKenzie's are so so. Margopoulos, who was never that great an author in my opinion was quite boring.
Posted by Quiddity at 8:34 AM