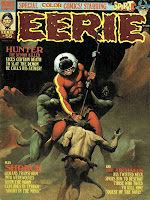 After a Hunter cover by Ken Kelly, two stories featuring Schreck start off the issue, "Worms in the Mind" and "No Flies on Schreck!" each by Vicente Alcazar (art) and Doug Moench (story). Bright Eyes, the asian woman introduced in the previous story helps turn Schreck back to normal by using a vaccine to cure his moontaint. They are attacked by the 'werewolves' and are on the run. They encounter Paula and Lee again, who is revealed to be Bright Eye's husband. In the second story, Schreck is seperated by Bright Eyes and meets another woman who is still normal. They go back and find that Bright Eyes has suffered from the moon taint. They are able to heal her, but just as she is about to come see them Lee shoots her from afar. Bright Eyes is buried and the story ends. Although things were left somewhat open, with Schreck alive and the 'werewolves' running amock, this would be it for the series.

Part four of the "Hunter" series is next, with art by Paul Neary and story by Budd Lewis (replacing Rich Margopoulos). Hunter comes across the town of Pharmark Phal, where demons have killed and raped many after finding that Hunter had been there. At the request of a dying friend Hunter fights the demons and saves his daughter.

The color feature for this issue is another preview of The Spirit, entitled "Bucket of Blood" by Will Eisner (story & art). Rich Corben provides the coloring.

The issue wraps up with part two in the Dr. Archaeus series, "The Quest of the Golden Dove". Art is by Isidro Mones and story is by Gerry Boudreau. Sanford warns the remaining jurors of Archaeus and one of them heads to Egypt to search for a golden dove statue. Along the way his girlfriend and a guide are killed by Archaeus. He eventually finds the golden dove, but it is actually a fake, a bomb planted by Archaeus that goes off, killing him.
Posted by Quiddity at 5:40 PM