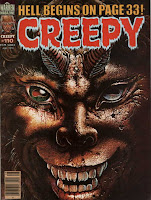 After a cover by Patrick Woodroffe, a closeup of a monster's face, we have "Snapper" by Leo Duranona (art) and Bill Kelly (story), about a group of plunderers who come across a giant turle that they destroy, only for its mate to survive and attack.

"Sunset Farms" by Rudy Nebres (art) and Gerry Boudreau (story) features a mobster and a well appreciated underling being sent to what is essentially a futuristic prison where everyone is heavily drugged. The mobster eventually finds a way for him and his underling to escape.

"Take Your Child, Please!" by Jose Ortiz (art) and Cary Bates (story) is next. The story features an orphan boy with an onion like head who is very violent with his foster family. Eventually he ends up trashing their house and even killing them. At the end his real parents, with similar features to him, start looking for him.

"The Demon Hater" follows, by Auraleon (art) and Nicola Cuti (story), which features a man who finds a demon's corpse. Other demons try to take it from him. With the help of a woman whom he has an important connection with, he's able to defeat them.

A very good story, "Horror is a Highrise" is next, by Leo Duranona (art) and Archie Goodwin (story). The story features a haunted skyscraper where lots of ghosts and horrific events occur. Eventually it is revealed that it was a warning for everyone to get out, as the skyscraper, built with crappy material, collapses and falls down.

"A Knightmare to Remember" by Buz Vaultz (art) and Cary Bates (story) features a monster fighting a princess, who turns into a knight. It ends up being a dream, but a knight lurks around the corner... Not too good a story.
Last is "The Clockmaker" by Jesus Blasco (art, miscredit to Joaquin Blazquez) and Bob Toomey (credited to Gary Null). This is essentially Poe's the Telltale Heart, rewritten to talk about the old man having clock body parts, which are never seen. Not that good a rewrite, it would be best just to keep the original story here.
Posted by Quiddity at 5:59 PM