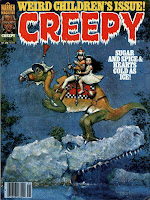 A special issue of Creepy featuring 'Weird Children' as advertised on the cover, done by Don Maitz. This is quite a good issue across the board, not a bad story here, although there is some negative aspects to the final story which I'll reveal when I get there.

First story is "Etran to Fulsing" by Dick Giordano (art) in a rare solo job, and Nicola Cuti (story). This seems like the typical medieval story of a prince savings a princess from a sorceror. The interesting twist this time is that the entire medieval setting is actually a delusion, and the reality is that everyone's in a war torn post apocalypic world.

Second is "Bad Tommy" by Martin Salvador (art) and Roger McKenzie & Nicola Cuti (story). The story tells of a young boy, Tommy, who creates an imaginary friend that kills both his parents. The boy goes to see a psychiatrist to tell her about it and it is revealed that Bad tommy is real, who promptly appears and stabs her. Not only that, but Bad Tommy is the real person, and the 'good' version of him is actually a robot created by him. Luckily the psychiatrist is able to kill him.

Third is "Ada" by Alfredo Alcala (art) and Bill Pearson (story). The Ada of the title is a girl who was born as an old woman then reverts in age as she gets older. The story surrounds a man who meets her and ends up staying with her til she turns into a baby then passes away.

Fourth is "Bessie" by Leo Duranona (art) and Gerry Boudreau (story). A woman comes to a detective to help her look for her daughter Bessie while he's working on a murder case. To make a long story short, it ends up that the woman is Bessie herself, as she had gone insane after a miscarriage and became convinced that she had a daughter as well who was actually just a second personality of her's.

Fifth is "Sacrifice" by Luis Bermejo (art) and Roger McKenzie (story). Four boys sacrifice a cat which gives them eternal life. Every 100 years they have to sacrifice another person to retain their eternal life or they'll immediately die. One of them decides to start using the others as his sacrifice. He heads after the last one only to find that he's committed suicide, which will result in his death.

Last is "Backwater and Timing Circles" by Alex Nino (art) and Budd Lewis (story). A boy takes a trip to the past to go fishing in the prehistoric era through the company Timing Circles. His guide warns him that they can't take anything back with them and must not kill anything, but when the guide gets in trouble, the boy stabs the dinosaur attacking him. This changes the present such that everyone becomes bizarre looking monsters. This story is blatant plagarism of Ray Bradbury's "A Sound of Thunder". Luckily for Warren, they never got in trouble with this as they did with Harlan Ellison's A Boy and His Dog.
Posted by Quiddity at 6:13 AM