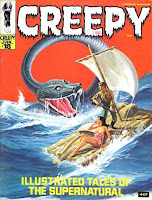 For my second Creepy review, I'm going to tackle issue 18, the first issue of Creepy to come out in the what is generally called the dark age of Warren. After 17 issues of Creepy (and 11 of Eerie), Warren hit some financial difficulty, and as a result editor Archie Goodwin resigned and all the artists except for Tom Sutton and Rocco Mastroserio departed as well. Not only were the issues reduced to far lower quality artists and writers, but reprints started populating the magazines like mad. At the very least, Creepy was lucky in that no issues were all reprint, although some Eerie ones during this time were.
The cover is by Vic Prezio and is of a sea monster attacking a couple on a raft. The frontis for this issue is "Creepy's Loathsome Lore!" which was a continuing feature included on all of the early Creepy issues. This particular one was written by Goodwin, and had art by Roy Krenkel. It was a reprint from issue 9.
Our first story is "Mountain of the Monster Gods" by Roger Brand (artist) and Ron White (writer). The story is about a pair of brothers who climb the mountain named in the title. One of the brother kills the other, only for him to come back from the dead and seek his revenge. Not a bad story although Brand's art is very simple and compared to the excellent artists who were mainstays at Creepy just an issue before, it just isn't on the same level. Brand's ex-wife Michelle would later join Warren herself as a colorer in the mid 1970's.
Next up is "The Rescue of the Morning Maid", the story's best issue. The art is by Rocco Mastroserio and Pat Boyette (who was uncredited) and the story was by Raymond Marais. The story surrounds a monster who finds a sorceress and a young girl who is kept captive by her. The monster is able to kill the sorceress only for the young girl to crumble to dust, having actually been much older and just trapped in the form of a young girl. Very good story, its unfortunate that Marais didn't do more work for Warren.
"Act Three" is written and drawn by Johnny Craig and is about an actress whose husband has turned into a werewolf. The two of them are able to get a doctor to create a cure, but when he injects both of them with the serum, the actress turns into a werewolf herself. Craig was my personal favorite of the EC artists and his Warren work was quite good as well. Unfortunately he would depart Warren for good after only a couple of more stories after this one.
The next story, "Footsteps of Frankenstein" is a reprint from Eerie #2. It is drawn by Reed Crandall and written by Archie Goodwin. The story is about a mad scientist who has created a Frankenstein monster and gets an old collegue to transplant his brain into the creature's body. Just as he's about to wreak havok on the villagers however, he is struck by lightning and is killed. Very good story by Goodwin and great Crandall art, although it is a reprint.
Last is "Out of Her Head!" by Jack Sparling (artist), in his first Warren story, and Clark Dimond & Terry Bisson (writers). The rather poor story surrounds a haunted mansion where a headless ghost seeks a head from someone else's body. Not that much special here.
Considering the era its from, this actually isn't that bad an issue. Unfortunately things would go quite downhill even further from here.
Posted by Quiddity at 7:27 PM

Isn't "The Rescue of the Morning Maid" the story that Mastroserio died in the middle of working on? Boyette finished it, if memory serves. I guess he went uncredited as a tribute to Mastroserio.