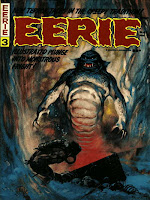 For my first original Goodwin era issue, I'm going to take a look at Eerie #3. This was during the first golden era of Warren, where Goodwin edited both Creepy and Eerie (and for its short run, Blazing Combat) and also wrote the majority of the stories. The original roster of artists, many of which had worked for EC were just terrific. Unfortuantely things would completely collapse by the end of 1967 with Goodwin and pretty much all of the artists, with rare exception, leaving.

Behind the Frank Frazetta cover of a watery beast coming out of a treasure chest is an introduction by Cousin Eerie on the inside front cover, drawn by Jack Davis. Davis did very little work for Warren outside of the cover of Creepy #1 and some drawings of the horror hosts due to his unhappiness with working with horror comics after what happened with EC.

Up first is "Soul of Horror", by Angelo Torres (art) and Archie Goodwin (story). This story's a great one, one of the best of this issue of Warren. Its about a devil worshipper killed by the town folk who is able to reincarnate himself in a newborn baby. By drawing the life out of the baby's father he is able to quickly grow into an adult and take revenge on those who killed him. The town doctor is able to kill him, only for him to be reincarnated once again in the doctor's newborn baby.

"The Lighthouse" by Al Williamson (art) and Goodwin (story) is second. It's about a publisher who goes to see a writer of his who has been staying in a Lighthouse. Along the way he meets a woman who ends up falling off a cliff. He finally meets the writer to find out that he's the one the woman was looking for. Apparantly the writer's grandfather got drunk, resulting in the death of a woman. A ghost of the woman, who was the person the publisher met earlier shows up and kills the writer. Her skeleton is found on top of his corpse the next morning. Another good story. Williamson's art looks quite a lot like Torres, which should not be a surprise as they had worked together in the past.

"Room With A View!" is up third, with art by Steve Ditko, in his first Warren appearance, and story by who else, Goodwin. A man arrives at an inn with no rooms available, except for a single one which the innkeeper warns him against staying in. The guest uses it anyway and sees a weird creature in the mirror. Each time he looks in the mirror he sees more creatures appearing until he is completely overtaken by them. Hearing his scream, the innkeeper comes up and finds the room empty, but sees the guest's corpse when he looks in the mirror. Yet another extremely good story. Jose Bea would write and illustrate a very similar story years later in Creepy #45.

"Monsterwork" is the next story, with art by Rocco Mastroserio and story by Goodwin yet again. A hunchback helps a mad scientist create a Frankenstein-like monster by stealing corpses. When the creature comes to life the scientist tells it to kill the hunchback, but the monster kills him instead, as the brain implanted in him was the hunchback's brother's.

"Under the Skin" is next, with art by Joe Orlando and Jerry Grandenetti (who is uncredited) and story by Goodwin. An unsuccesful actor envies another actor whose able to get great roles due to his horrific makeup. By murdering the actor and stealing his technique, he is able to get a great role, but is unable to take off the makeup when he's done. It ends up that he hallucinated the whole thing, and ends up tearing all the skin off his face. Another really good story; its a shame Grandenetti got no credit as he appears to have a lot more influence in the art that Orlando did.

The one page "Eerie's Monster Gallery: No 2 - The Vampire!" appears next, with art by Jay Taycee (actually Johnny Craig, using a pseudonym to hide his identity). This feature usually appeared in the inside front cover of Eerie, and would appear there permanently starting in the next issue.

The sixth story is "The Monument" by Alex Toth (art) and Goodwin (story). This story, which appears to be an unauthorized adaption of Ray Bradbury's "The Coffin" is about a design firm owner who convinces an aged architect build a house for him, by telling him that it will be his house. He kills him when it nears completion. Upon laying in his bed for the first time, he is killed by machinery in the house, which the architect had intended to be his tomb upon completion.

Last story is the cover story, "Full Fathom Fright" by Eugene Colan (art) and Archie Goodwin (story). A pair of brothers are hired by an old man to find a treasure chest in the ocean depths and kill the old man once discovering it. Upon opening the chest however, a demon comes out and kills one of them, causing him to transform into a demon himself. One of the brothers survives and is put in an institution, but transforms into one of the demons upon being given a hot and cold bath shock treatment.

Great, great, issue, even for this period in Warren's history. The art is terrific on all these stories and the writing is quite good as well. Goodwin is able to put out 7 unique stories despite writing all 7 stories here. One of Eerie's best issues in my opinion.