A pretty good issue of Creepy from 1974. This was the first of 4 issues edited by Archie Goodwin during his short return to Warren as editor. A pretty good issue which would preview some of the terrific stuff that would be coming in Creepy over the next year.

Behind the Sanjulian cover of a mummy's tomb is the frontis, "Child of Hell", with art and story by Bill Dubay. This was the last of the frontis stories, they would be replaced with portraits of Uncle Creepy starting with the next issue.

First up is "A Stranger in Eternity" by Adolfo Abellan (art) and T. Casey Brennan (story). This story is a sequel to the story "A Stranger in Hell" from Eerie #38, which I have reviewed earlier in this blog. This story features the main character of that story in long rambling conversations with the cloaked female character he had encountered before. Like the first story, this story makes little to no sense and is quite poor. That said, Abellan's art is somewhat better than usual here.

Second is "Advent of the Scrap-Heap!" by Jose Gual (art) and Rich Margopoulos (story). When a group of mobsters kill a monk mistakenly, his spirit causes a conglomoration of trash and junk to form a humanoid giant that goes on a rampage in order to take revenge. A rather odd premise, but not that bad of a story.

Third is "The Ghouls" by Martin Salvador (art) and Carl Wessler (story), about a pair of grave robbers who encounter a group of vampires in a graveyard. It ends up that one of the robbers set up the other, making a deal with the vampires to feast on his body, as he's a ghoul who will get the body after the blood is drained from it. Wessler's story here reminds me of his EC work from approximately 20 years earlier.

This issue's color story is "Terror Tomb" with both story and art by who else, but Richard Corben, who did the color story in Creepy for about 10 straight issues during this period. This is a very fun comedic story about a group of archaeologists who go into a mummy's tomb where some of the locals are setting them up by bringing the mummy back to life. Only things don't exactly go as planned for all involved.

"The Blood Colored Bike" is next, which like the previous story is handled by a single person, this time Jose Bea. The story's about a pair of factory owners who clash over the idea of purchasing a motor bike. The owner desiring the bike ends up killing the other one with an axe and buys his bike, only for the ghost of his dead partner to haunt him while riding it until he rides off a cliff. The lead character's desire for a bike is rather goofy, but overall not that bad a story.

"Twisted Medicine" by Leo Summers (art) and Steve Skeates (story) is the issue's best story, about a one armed hunchback who plans revenge on the witch he works for only for his plans to go up in smoke when she uses him as one of her ingredients for a spell. Intersperced throughout the story is the path of a boy growing up and joining the military. In the end it ends up the entire story was a hallucination of a blind, deaf and handless veteran laying in a hospital bed. This story would end up being one of Warren's most controversial stories ever (although not the most, that title would almost certainly go to "Landscape" from Blazing Combat #2) due to the ending, and was the centerpiece of an attack on Warren in a page long letter published in issue 64, which resulted in months of debate in the letter page. 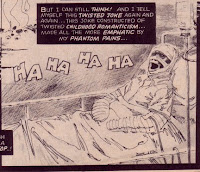 Last up is "Encore Ghastly" which is written and drawn by Tom Sutton. One of Sutton's last jobs for Warren, the art here is one of his best. The story is about an old man based on Dr. Frederick Werthem (whose unfounded attacks on comics almost destroyed the entire industry in the 1950's and led to the creation of the Comics Code) who has been the subject of attempted murder. In the end it ends up the killer after him is an artist based on horror artist "Ghastly" Graham Ingels whose upset over the impact his work had on his job prospects. With horror comics popular again, he's happy to attempt a comeback, using Werthem's blood as ink in his story. Terrific tribute to EC great Ingels, who was one of the very few EC artists who never worked for Warren (having left the medium altogether by that time).