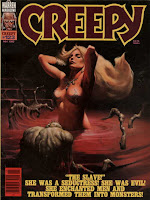 This issue of Creepy came during Bill Dubay's second period of editorship, while he was under the alias "Will Richardson". During this time period the quality of Warren's magazines were steadily going down, although overall this is a fairly good issue. The sexy cover is by Ken Kelly, one of his better ones.

First story is "Kiss of the Plague!" by Leo Summers & Alex Toth (art) and Doug Moench (story). Given that Summers stopped working for Warren around 1975, and Moench likewise vanished from the pages of Warren around that period (outside of the 3 part series 'Blood on Black Satin' published in Eerie towards the end of Louise Jones's time as editor) one wonders if this story wasn't prepared years before and just sat around for a few years. Anyway, any story with Alex Toth art is something easy to enjoy and this story is no exception. The Summers/Toth combo provides an interesting art style, although this would be their only work together at Warren. The story surrounds a woman who dies of the plague. Her family and husband's family slowly start being murdered. Suspecting it was the husband, the last 2 remaining relatives kill him, only to find out that it was her all along, and that she was never actually dead, just horrifically disfigured from the plague. Very good story here.

Up next is "Hands of Fate" by Martin Salvador (art) and Carl Wessler (story). Wessler is another writer who was prominent at Warren in the mid 1970's, but by this point had left the company, making me wonder if this is another story that was held in reserves for a while. The story is about a murderer held in an institution who killed three different people with his hands. One night he finds his cell door unlocked and he takes the opportunity to escape. He hitchhikes and ends up getting picked up by the ghost of one of his victims. The other two victims soon arrive and chop off his hands. Although the whole experience ended up being a dream, it frightens him so much that he loses the use of his hands permanently.

Third is "They Don't Make Movies" by Carmine Infantiono & Alfredo Alcala (art) and Gerry Boudreau (story). Except for a single story in Creepy #83, Infantino never inked his own artwork at Warren and was often paired with one of many different inkers including Alex Nino, Walt Simonson, Dick Giordano and Alacala. The result was a somewhat unique style of art each time. Although admittingly here Alcala's inks are so strong that the Infantino influence is hard to notice. The story is about a newspaper reporter investigating the death of a prostitute who was killed in a porn movie. Not a bad story, although there's no horror element whatsoever to it.

The cover story, "The Slave" is fourth, with art by Jesus Blasco (miscredited to Jaime Brocal) and story by Jim Stenstrum (credited to his pseudonym, Alabaster Redzone). Blasco, a well known spanish artist, did three stories for Creepy around this period but all were miscredited to Jaime Brocal or Joaquin Blazquez, artists whose style looked nothing like his. In medieval England a War Lord's slave/lover convinces him to refrain from imposing taxes for a full year if she can ride through town on a horse with no one looking at her. One man tries to look but ends up being struck by lightning, horrifically scarring his face. The slave befriends the man, admitting to him that she used her magic to strike him with lightning so the town wouldn't be punished for his deed. She then transforms his deformity to the War Lord. Short, but good story, the best one in the issue. 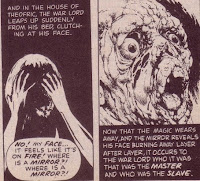 "Harriman's Monsters!" is next, with art by Dan Adkins and story by Greg Potter. Potter was another writer who left Warren years ago. It's been said that in the last few years of Warren's existence, they used up a lot of inventory & rejected stories as well as reprints of stories done in other countries (like the prior story, The Slave), and this issue is ample proof of that with so many stories by writers that were long gone from Warren at this point. A special effects expert is jealous of another special effects guy who does even better than he by making his models look extremely realistic when moving. He confronts the man only to find out that the models look so realistic because his adversery can use telekinesis, which he uses to kill him.

The issue's worst story is "Always Leave Them Laughing" by Rudy Nebres & Val Mayerik (art) and Michael Fleischer (story). This story surrounds a depressed old clown whose about to die. Yawn. Did not like this one at all.

Last up is "Jelly" by Herb Arnold (art) and Nicola Cuti (story). Arnold's art looks kind of like Richard Corben's, but his skill isn't anywhere as good as Corben's is. The story is about blob-like creatures called jelly which are accidently mixed with the food of that name. A very short story at only 4 pages, but it is at least somewhat better than the previous one.

Overall, a fairly good issue considering when it came out. Although that likely has to do with having multiple stories that were probably drawn 3-4 years earlier.
Posted by Quiddity at 12:13 PM