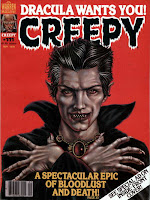 Here's an issue of Creepy from near the end of Louise Jones's run as editor, in 1979. The cover by Duane Allen is of a vampire. This would be Allen's sole cover for Warren.

Up first is "Dreams of Grandeur" by Val Mayerik & Kllaus Janson (art) and Budd Lewis (story). It features a boiler room worker who has psychic abilities to occupy the mind of another person while he's asleep. This gets him in trouble with both his boss and eventually the pilot whose mind he keeps trying to occupy, and eventually results in all of them being killed.

"A Stiff Named Sczynsky" by Auraleon (art) and Bob Toomey (story) is up next, about a ghoul on a hospital ship who gets haunted by the corpses he's eaten.

"Heart of the Warrior" is third, with art by Alajandro Sanchez and story by Bill Dubay. This is a rather dull medieval story about a warrior going after a sorceror in order to save his lover. The hero ends up losing in the end and his heart is used for a spell. Sanchez's art is hardly all that to my liking either. He'd do another half a dozen or so stories for Warren over the next few years.

The cover story, "Blood Lust" is next, with art by Leo Duranona and story by Cary Bates. The story is about Wilma, a woman who was breeded with blood poisonous to vampires. After being used to kill many vampires, she desires to quit but decides to do one more mission in order to kill the original Count Dracula. Falling in love with him, she tells him the truth, but he reveals that he has taken a serum such that her blood won't be poisonous to him. Her superiors find out and are still successful in killing Dracula by killing her and filling her veins and arteries with garclic embalming fluid. Very good story, best one of the issue.

"Night Wind" by Masanabu Sato (art) and Masanabu Sato & Gary Null (story) is the issue's worst story. 'Gary Null' was actually a pseudonym of writer Bob Toomey, used when he rewrote scripts of other's stories. Jim Stenstrum did the same type of thing using the name 'Alabaster Redzone'. This is a rather dull story of a female knight rescuing another woman and killing a demon. Yawn.

Last up is "A Switch in Dime" by Leo Duranona (art) and Nicola Cuti (story), about a scientist who creates a device which is able to connect to another dimension (which he calls a 'dime'). After activiting the device, he switches places with another man and problems ensue. When both try to return to their home dime and end up getting stuck together, they are put into a freak show as siamese twins.

Overall, an average issue. Duranona's stories are pretty good, but the rest of the stuff isn't that special.