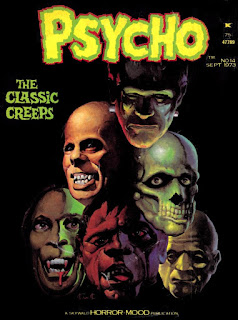 This issue of Psycho features a cover by Ken Kelly, including various monster faces like Frankenstein's Monster, the Phantom of the Opera, a vampire and more! It is cover dated September 1973.

The frontispiece for this issue features art by Maelo Cintron of a skeleton, and is more akin to the text stories Skywald used to include, with it taking up approximately half the page. It is titled "The Dead..."

First regular story is "The Classic Creeps" by Al Hewetson (story) and Francisco Cueto (art). the story begins telling us our protagonist is a lunatic, and we watch him watch a Dracula movie. He then decides to bring it to real life, dresses like Dracula and bites the neck of a woman in the park! He is able to escape from the police and the woman lives. He then starts watching other horror movies such as Dr. Phibes, The Mummy and Phantom of the Opera, taking on that guise for another attack, which is successful this time. He then takes on the role of the hunchback of Notre Dame, and then Frankenstein's monster, trying to grab a little girl and drown her but the police are able to kill him, saving her. As the story ends we find that our protagonist had a kid's show on TV where he dressed up as various monsters but it got cancelled. Cueto's art is a bit improved here than some of his past jobs, and although the story is a bit longer than it needed to be, it is pretty good.

Second is "The Monstrosity... Strikes!" by Augustine Funnell (story) and Ricardo Villamonte (art). This story begins with a man walking down an alley when suddenly a blob like creature with two glowing eyes rises up and attacks him! The monster completely consumes the man's body then slithers back into hiding, waiting for its next victim. The next night a cop passes by but is able to avoid getting consumed and shoots the monster repeatedly until it dies. In the final panel we realize that the creature had several children who are still alive! A cliche ending drags this story down a bit, making it overall average at best.

Third is "The Artist's Other Hand" by Al Hewetson (story) and Jesus Suso Rego (art). This story is a blast, and is another one of those Skywald stories that kind of breaks the fourth wall. Our unnamed artist, who is visually modeled after artist Suso works on drawing a horror story about an artist who has a third arm growing out of his chest, is knocked out by a woman when the arm attacks her, but she chops it off him, and he thanks her for releasing him from its control. The artist brings the story to his editor, who is modeled after Al Hewetson, but he hates it! The two of them go through varying scenarios under which the artist can change the story to improve, but the editor hates them all, pointing out The Heap as more legitimate horror (kind of ironic since Hewetson reportedly hated The Heap). Eventually this leads to the editor punching out the artist and in the final panel we see some artists focusing on a new story with some scarier monsters. Much like The Comics Macabre, which just appeared in Scream, it was a lot of fun getting to see actual members of Skywald appear in a horror story.

Fourth is "The Horror That's Not All It Seems" by Al Hewetson (story) and Antonio Borrell (art). At a mere one page, this is a brief historical telling of how scalping, viewed as something Native Americans would do to colonists and settlers, was actually something the white man was doing first, with Native Americans adopting it only as vengeance. This is something I hadn't even realized was the case, so this was an educational read.

Fifth is "A Man Who Dare Not Sleep!" by Ed Fedory (story) and Felipe Dela Rosa (art). This story features a ship captain tied to the helm of the ship, dozing off. He fears a vampire on board the ship and has put crosses around him only for the vampire to toss them aside. The captain hopes for the clouds to part, for the sun to shine through and kill the vampire, and that's exactly what happens. At least as far as I can tell. On the final page the captain shouts out that it is the Southern Cross in the sky, a constellation, but you'd figure that can only be seen at night, so how did the vampire die?

Sixth is "Cassandra... Sorceress of the Seventh Wind" by Marv Wolfman (story) and Don Heck/Mike Esposito (art). I'm assuming this story is an inventory one as none of the men involved in creating it had put out a new Skywald story in a while. This story is also a stark contrast to Hewetson's style and is more the type of story we'd see in an early Skywald issue. It features the titular Cassandra, who asks a minstrel to join her on a quest to battle the evil wizard Morlock. Many pages go by, monsters are fought and Cassandra and the Minstrel finally reach Morlock. There's a body swap temporarily and in the end we find out that Morlock pursued the minstrel because he is the man who sunk Atlantis. I really don't care for these more sword & sorcery type stories unless we're getting some strong art of it and that isn't really the case here.

Seventh is "The Hippy-Critters Are Comin'" by Al Hewetson (story) and Fernando Rubio (art). In this story we see a couple of odd men watching as a couple park their car and go into a restaurant in a small town in Arkansas. The woman in the couple ask the man if it was wise to bring "Peter" with them. A few more scoundrels gather outside and they grab a hold of the couple. But we then realize that Peter is their car, its alive and it starts eating them! This rather brief story has quite the hilarious ending and the man eating car is a sight to see.

We wrap up with "I Battle the Vicious Vampire Bats of Transylvania and I Lived to Tell About It" by Al Hewetson (story) and Maro Nava (art). This story is Nava's Skywald debut. A British man comes to Transylvania and speaks of the descendant of Dracula, having talked about it to a man in another town. He is told by a bartender that Dracula's castle is nearby. Soon another man, wearing a cape comes in. He claims to be an American and offers to bring him to Dracula's castle. When they arrive, the American reveals that he is in fact Dracula's son and attacks, but our protagonist turns the tables on him. It seems like the American is a phony Dracula's descendant, but our protagonist is the real thing and kills him, being a vampire himself. Nava's art here is extremely similar to that of Jerry Grandenetti, enough so that in many panels one could easily think Grandenetti drew this.
Posted by Quiddity at 4:09 PM