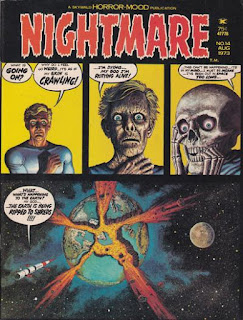 Xavier Villanova, usually an interior artist for Skywald, provides the cover for this issue, cover dated August 1973. This is a hilarious cover, my favorite out of all of Skywald thus far and is its own mini story!

This issue's frontispiece is "The Easter Island Things!" by Al Hewetson (story) and Maelo Cintron (artist). It features the statues of Easter Island, going on a rampage!

First story is "The Diary of an Absolute Lunatic" by Al Hewetson (story) and Felipe Dela Rosa (art). In the 1920s a madman is brought to a lunatic asylum. The doctor of the asylum starts reading some papers that was along with the man. In them, the madman, whose name is Munro, tells of how he is a time traveler. In the year 1999 the Presidents of Earth gathered to celebrate. One such President however, named Tuckle starts making demands for money and special privileges; if not provided he will blow up the Earth. People ignore his mad ravings and start proceeding to impeach him. Meanwhile Munro starts traveling through time and by doing so sees the Earth explode! He goes back in time, seeing the birth of nature, of humanity, but eventually his craft crashes, leaving him stranded in this time. The doctor decides to burn all the paperwork, considering it the ravings of a madman. When his assistant talks to the doctor about how its funny that the crazy President Tuckle shares the same name as him, he strangles her and blames Munro, as the story ends. A fairly strong effort, my favorite story of the issue. Dela Rosa also provides some pretty strong artwork as we get to the later part of the story and Munro starts traveling through time.

Second is "The Plastic Plague" by Jack Katz (story and art). It had been quite a while since we've seen a Jack Katz story for Skywald, making me wonder if this was an inventory story. A group of prehistoric-like people discover a message, from the past, when Earth's civilization was more advanced. It is from a man named Neal Dennis who created advanced plastic. It becomes extremely popular to use and a massive industry grows. There even become plastic people! But plastic people don't consume, the economy is expected to collapse and Neil is asked to create something that will destroy the plastic. He creates an organism that consumes the plastic. Naturally it escapes, and the organisms quickly grows into large slug-like beings. Society collapses and we see him putting together his message, bringing us back to the people we saw at the start of the story.

Third is "Death of the 80th Victim!" by Doug Moench (story) and Ricardo Villamonte (art). A serial killer is stalking and killing East Indian women, and chopping off their hand. It is investigated by Inspector James Reston and his assistant Rahib. After Rahib's wife is killed he and Reston head out at night where Reston reveals that he is the killer. As a boy when his father was stationed in India, he was kidnapped and tortured, with his hand being cut off. Despising Indians, he purposely made sure to kill them and cut off a hand. After killing Rahib, Reston returns home, revealing a chest full of hands and writes a suicide note, chopping off his other hand and dying.

Fourth is the one page "...Werewolf..." by Ed Fedory (story) and Juez Xirinius (art). This brief feature is about the werewolf of Le Geaudan, which terrorized France.

Fifth is "...And the Corrupt Shall Dine!" by Ed Fedory (story) and Fernando Rubio (art). This is an incredibly confusing mess of a story and it is quite difficult to identify what is going on. Two men dine, one being the guest of the other. Flashbacks show that the host was a vampire, yet the guest either purposely led away a mob someplace else, or to another vampire who looks the exact same and gets killed, with the host leading the attack. The guest, enjoying the meal, ask for the recipe of what they are eating. The host reveals it was blood sucking leeches, then reveals he is a vampire and kills his guest.

Sixth is "Charles Laughton: Scream Screen Scenes" by Al Hewetson (story) and Domingo Gomez (art). This two page feature is the second part of the Scream Scene series that we just saw premiere in Psycho. It is about Charles Laughton, the silent movie director/actor. We see scenes from movies such as the Hunchback of Notre Dame, The Island of Lost Souls and Les Miserable. Similar to last time the brief scenes included aren't word for word adaptions to avoid copyright issues.

Seventh is "Starchild" by Bruce Jones (story and art). This is an inventory story held onto for a couple of years when Skywald's planned sci-fi magazine never happened. The robot Cyx travels through space with the titular Starchild, a girl who has grown up floating through space and is now 17 years old. Her parents were on board the ship Dori Ann, which was destroyed in a cosmic storm, but Cyx found her, still alive in her mother's womb and has kept her alive all this time. Finding a planet capable of life, she and Cyx go down there where she encounters various forms of wildlife, including a dinosaur! A spaceship eventually arrives and a man comes out. Starchild goes to be with him, leaving Cyx behind and the ship takes off. Jones' art is fairly good here, although a little lower quality than some of the other stories he had provided for Skywald. It was surprising to see a story with a happy ending! Not used to that for Skywald, or Jones personally for that matter.

Eighth is "The Creature from the Black Lagoon" by Al Hewetson (story) and Ricardo Villamonte (art). Although it isn't under the Scream Scene title, this story appears to be another in the series, being only two pages in length and featuring a short scene from said movie.

Ninth is "The Butchered at Earth's Core!" by Ed Fedory (story) and Jesus Suso Rego (art). While "Death of the 80th Victim!" was about Indians in London, this story literally takes place in India. A man comes across a leper who says he will tell him a story. The man follows the leper to his home where he provides him some water. Upon drinking, the man's head starts spinning. The leper takes off its cloak, revealing it to be wearing some weird uniform. The leper carries him down into a tunnel, revealing a spaceship as he appears to be an alien! On board are many other aliens that look like lepers. Our protagonist wakes up, being surprised to find that he is going to be used as part of a factory with many human victims! A pretty good effort from both Suso and Fedory here.

We wrap up with the latest story in the Gargoyles series, "And they Did Battle with the Thing from Underneath" from Al Hewetson (story) and Maelo Cintron (art). Edward gets a job with a Mr. Roanoke who works on a tug boat, the Andy Jackson. He and Mina go through some difficulty and discrimination as they try to find an apartment for themselves. For the fourth time, some Satanists get involved, beating up Roanoke due to his employ of Edward. Suddenly a tentacled monster attacks Edward, who battles and kills it. His fight ends up being front page news in a newspaper! Edward decides that he and his family must leave Manhattan, at least for now and as the story ends they start hitchhiking. While Cintron's art is pretty decent, I'll admit to getting bored with the Gargoyles series at this point. The Gargoyles face discrimination for being gargoyles. Edward battles some monster summoned by or used by the Satanists. Over and over again. Yawn.