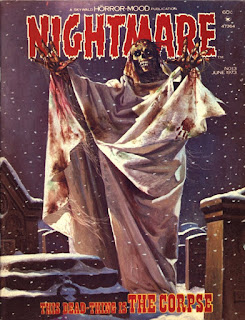 Today I am covering Nightmare issue 13, cover dated June 1973. The cover is by Vicente Segrelles, and was also used as the cover for Richard Arndt's Horror Comics in Black and White book.

We first have the one page frontispiece "The Corpse Feast!" by Ed Fedory (story) and Juez Xirinius (art). It features a military sergeant who goes into the graveyard to feast on a corpse.

First story is "At Mind's Edge" by Ed Fedory (story) and Jesus Duran (art). A man returns to his apartment to find a hooded figure there. The hooded figure says he is a messenger of peace and upon massaging his forehead our protagonist descends into a dream like world, including one where he is thrown off a cliff, and into a weird portal. The hooded figure reveals himself to actually be the Lord of Insanity and our protagonist is eventually found dead in a sewer drainage pipe. Duran's art looks a bit like Adolfo Abellan's here (and I recall Abellan having a Warren story with a similar looking hooded man). The actual plot is a massively confusing mess.

Next is "Curse of the Werewolf", a one page feature from Ed Fedory (story) and Xavier Villanova (art). Three panels tell about three different werewolf attacks.

Second story is "...Die Little Spider!" by Al Hewetson (story) and Fernando Rubio (art). A housewife kills some spiders with a knife, and when her husband comes home he reveals he's going to kill her! He bounds and gags her, and puts her in a giant translucent jar, then dumps a number of spiders on her. The spiders consumer her body and he eventually moves the jar to the basement. After fully consuming her, the spiders go hungry and make themselves out of the jar, killing the husband too.After consuming his body they bring his remaining bones to be put in the same jar as his wife.

Next is "The Mad Nightmare World of H.P. Lovecraft", a two page feature from Al Hewetson (story) and Felipe Dela Rosa (art). Actually just one giant panel, this shows Lovecraft sleeping and lots of bizarre visions from his dreams.

Third full length story is "...Only the Wretched Die Young..." by Al Hewetson (story, uncredited) and Ricardo Villamonte (art). Many centuries ago, Charles seeks to take his brother Doug's wife Brenda and kill him and his son, Jamie. When Doug and Jamie go to an island to fish and hunt, a monster attacks and kills Doug, and then enters into Jamie. Jamie eventually returns to get revenge, but oddly enough the story has moved into the present time. Charles tries to throw him off a skyscraper, but the monster's tentacles save him, then presumably kill Charles and Brenda. Villamonte's art is at times good, at times bad, while again the script is considerably confusing.

Next up is "The Corpse" by Al Hewetson (story, credited to Howie Anderson) and Francisco Cueto (art). Siegfried is a young man in East Germany and after his lover Anna dies, he works in a graveyard and saves money, seeking to escape, by using cheap material for graves and also killing people to bring in more business. He is eventually found out for his theft of castle material, tries to escape from prison but is killed, then his corpse rises from the dead. He returns to the graveyard where Anna is buried, and the corpses of those he killed also rise. They can't kill him as he's already dead, so they get the corpse of Victor Frankenstein, causing him to become a living corpse! Cueto's art is rather mediocre, but I do like how ridiculous the story gets towards the end.

Following that is "Frankenstein 1973" by Al Hewetson (story, credited as Earle Leroy) and Xavier Villanova (art). This story is a continuation of the long since paused Frankenstein Book II series. Where we last left things off, Frankenstein's Monster and the young woman Lilith got transported far away after an experiment gone bad. They find themselves in the year 1973 and meet a group of rotting corpses that were Nazis when they were alive. The Nazi corpses plan to conquer the world and desire Frankenstein to joint them, but he refuses and destroys all but the leader of them. The leader then gets in a plane and fires at them, killing Lilith before crashing. Frankenstein's head starts spinning and he finds himself transported yet again as the story ends. After this brief return, this series goes on yet another hiatus.

Our issue concludes with the latest story in the Gargoyles series, "Only the Strong Shall Survive" by Al Hewetson (story) and Maelo Cintron (art). The gargoyles, Edward and Mina, with their child Andrew make their way to America as illegal immigrants and get off in Manhattan. At first they steal food to survive, but come across a dwarf who brings them to a place he called The Village where they can stay. Yet when they arrive they find it is the Satanists cult once again, who seize them and Edward fights and kills a giant monster. They are taken and brought before a judge, but rather than deport them, he permits them to stay as long as they prove to be a contribution to society. This series is already starting to get old to me as the Satanists cult shows up as the villains for the third straight story. Hopefully we go in another direction next time.

Hello, I saw your post about Creepy #92 and the Corben/Cuti story Instinct. It was published in 1977, but I noticed the art style as being earlier as well. I was just curious was to how you pegged the 1970 creation date? I think you are correct about that year.best regards, John

Hi! If I remember correctly I had read about that from another source, I think from Richard Arndt, who used to have a Warren database online before he turned it into a book (which I've mentioned at least a few times in my Skywald posts).