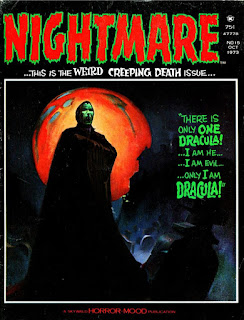 Happy black Friday, everyone! We've got another Ken Kelly cover for this issue of Nightmare, cover dated October 1973.

The frontispiece for this issue is "How They Killed the Chicago Vampiress" by Ed Fedory (story) and Emilio Bernardo (art). It features a dead young woman having her body burned due to feat of her being a vampire. In what may have been a production error, an image from the story "15 Dead Things" which was originally intended for Psycho #15 appears on the table of contents page, rather than an actual story from this issue. That story will finally appear soon in Psycho #15.

First story is "Dracula Did Not Die!" by Al Hewetson (story) and Antonio Borrell (art). The first few pages of this story act as a historical account for the real life Dracula, Vlad the impaler. It was thought he was dead, but when his coffin is dug up only a horse's skeleton is found inside. Vlad/Dracula laughs at being able to fake his own death, but does regret that he'll have to hide himself and not be able to take advantage of his wealth, influence and power. Dracula explains how he was able to fake his death and killed any witnesses. He heads towards his castle, finding it on fire and swears those doing so will pay. The story suddenly stops here, implying that his will be the start of a multi-part series. Some pretty good art from Borrell here, although this is much more of just an introduction than a full story.

Next is "The Gargoyle Who Went to War", a two page feature from Al Hewetson (story) and Fernando Rubio (art). This brief story takes place in Paris France where some people gather to look at the gargoyle statue on the Cathedral of Notre Dame. Natzis arrive and take over the city, lining up people to be shot. Then suddenly, the gargoyle comes to life and kills the soldiers. This story is unrelated to the long running Gargoyles series.

Third is another two pager, "The Truth Behind the Myths About Bats... Particularly Vampire Bats" by Al Hewetson (story) and Domingo Gomez (art). Rather than being a typical story, this is rather a two page feature providing factual information about different types of bats.

Following this is "The Kid and the Killer and the Bum Rap" by Al Hewetson (story) and Francisco Cueto (art). A man named Miller is brought to jail, claiming he's been framed. He is put in a cell with a man named Eddie, who claims that he was beat up by him when he was a kid. Miller admits to being a killer, but claims he didn't commit the murder they claimed he did. Eddie and Miller start talking about things that Miller did when he was younger, including some murder he actually committed. Eddie tells Miller that he is in here for killing his wife, and his brother, his father, his landlord, a gay neighbor, many cops, doctors, etc... and says now he's going to kill Miller. We hear the guards laughing as the story ends. A rather abrupt ending to this, and we gotta presume Miller died, although why the guards would be in on it I'm not sure. Cueto's art is at least a little better than usual here.

Fifth is "Tapestry of Blood" by Ed Fedory (story) and Fernando Rubio (art). A man finds himself shipwrecked on an island in the south Pacific. To his horror, he soon sees a fellow man killed by a giant snail! He beats the snail to its death but it is too late to save the man. Suddenly another man wearing an overcoat, hat and sunglasses appears. Calling himself a doctor, he leads our protagonist into the woods and to his camp. There he tells our protagonist of how his wife lies in the waters beyond the reef and he can never leave. Our protagonist later follows him, and the doctor explains how he died and was resurrected, and how our protagonist killed "Grayson" who is revealed to be the snail he attacked earlier. The doctor removes his sunglasses, revealing himself to be a snail like creature and bites into our protagonist! Quite a fun ending to this story, which I enjoyed.

Sixth is another in the Shoggoths series with "The Grotesque Green Earth" by Al Hewetson (story) and Zesar Lopez (art). Hewetson and Zesar are actually characters in this story! They receive a letter from a Howard Hay in Arkham, Massachusetts. Upon arriving he tells them of manuscripts he's found from a woman from approximately a century ago who lived by the river. We then flashback to see the woman as she writes. At her husband's grave she finds a hole that leads her down into a lengthy pit. This eventually leads to a large cavern where she finds an underground city. Inside she finds a library filled with zombies,, writing of man's doom. Suddenly some Shoggoths arrive. They chase her back up to the surface and even after she makes her way there they make it through. Hay, Hewetson and Lopez head to where the papers were found and it leads to an underground tunnel where they find her skeleton, where she's written that they will come to the Earth, in 1973! This story's style is much like the previous Shoggoths story in Scream #1 and reads as if it was a Lovecraft story itself. Zesar's art is strong as well, making this a pretty high quality story.

Next is "Ravings of the Damned" by Ed Fedory (story) and Juez Xirinius (art). A pair of archaeologists in a temple find a desecrated corpse of one of their men in front of a large statue. One of the men thinks a monstrous snake did it, while the other thinks it is Quontotaz, an Indian legend. Later that night, one of the men hears the other screaming. It is the statue, come to life and crushing him in its arms. Months later another expedition arrives. The remaining man is now worshiping Quontotaz, and is in a beast like form. Just there, the stories stops rather abruptly. A quick ending to an average at best story.

We wrap up with another story in the Gargoyles series, "Once Upon a Time in Alabama: A Horror" by Al Hewetson (story) and Maelo Cintron (art). Edward and Mina, with their child Andrew hitchhike their way to Birmingham, Alabama. Edward is able to get a job on a construction work site and saves a man falling from above. Just then, another, evil gargoyle arrives. He demands Edward fight him, or his wife and child will be killed by being shot by a madman at a riot (how a gargoyle can be killed by mere bullets eludes me...). Edward has had enough, decides to fight the enemy gargoyle and kills him. He then finds Mina and Andrew, safe and sound at a rally. This is standard fare for the Gargoyles series, pretty good art, but a rather uninteresting story. Gargoyles face some discrimination. Edward fights some sort of monster. Rince and repeat.