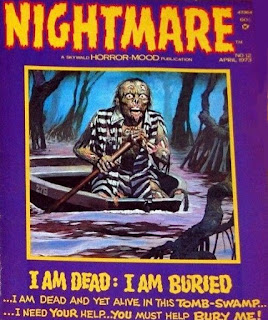 First is "Nightmare in the House of Poe" by Al Hewetson (story) and Ferran Sostres (art). Rodney Serle is staying in New Orleans yet finds the partying there out of control. He goes to stay at a local rooming house only to find some small humanoid monsters grabbing him out of his bed and forcing him down some creepy stairways then into another party. Rodney awakens, revealing it to be a dream, but strange things continue to happen to him over and over again as he continues to experience bizarre dreams that come to life. This lengthy story at 15 pages is quite surrealistic and features some strong art by Sostres. It reminds me a lot of the type of stories we'd see from Jose Bea at Warren, such as the "Picture of Death" which also featured a man in a rooming house/inn who gets seized by strange monsters.

Next is "Premature Burial" by Al Hewetson (story) and Juez Xirinius (art). With the last story being named after Edgar Allen Poe, this story is an actual Poe adaption, the first we have seen in Skywald (but not the last by a long shot as it will get quite common eventually). The first few pages of the story tell us of various situations where people were mistakenly buried alive or thought dead but really weren't. Our protagonist is afraid of this happening to him and arranges several ways for him to escape his coffin such as a bell and a way out of the coffin should he be declared dead. Yet when he strikes his head while on a boat, he awakens horrified to find himself in a coffin on said boat, and not his specially made one. After calling out people realize he's alive, although the final panel reveals that he was never in a coffin after all, just a tight bunk bed. A fairly good story here (this is a Poe story I'm not too familiar with so I don't know how faithful it is) and some excellent art from Xirinius.

Third is "Kiss of the Vampires" by Chic Stone (story & art). Chic Stone hadn't done a story for Skywald in a while, having been pushed out by the Selecciones Illustrada artists and I suspect this was an inventory story held onto for a while before publication. Our story begins with Marisa, Priestess of the Undead chopping off the head of a man so she and her followers can drink his blood. The narrative then switches to Philip and Thatcher, a pair of men that have come to the town. Thatcher actually specializes in killing vampires and was called to the town to help with the recent incidents. Meanwhile Philip meets Marissa, not realizing she is a vampire and becomes her latest victim. Thatcher, after slaying a vampire himself is able to find the tomb where Marisa's followers sleep, slaying each of them with a stake. Marisa then arrives and she tries to possess him with her beauty, then stabs him with his own stake. She walks into a bear trap however and when the sun rises it kills her. Story-wise nothing too outstanding here but it was good to see Stone doing another story.

Next is "I am Dead: I Am Buried!" by Al Hewetson (story) and Xavier Villanova (art). Prisoner Ed Warton travels through the swamps in Arkansas but is captured, then is whipped and thrown in a pit as an example to the other prisoners. To the guard's surprise, he dies. Warton's corpse rises from the pit, slays several guards then escapes into the swamp. From here on the story takes a pretty big left turn as we see the point of view of the writer of the story, trying to figure out how to conclude things. Suddenly Warton's corpse appears for real, demanding him to figure out a way to get him out of the swamps. He then requests a nearby kid to tell him how to end the story. From there the narrative returns to a few days earlier, where Warton is revealed to be dead for good and never rises as a corpse. Although oddly enough the body of a man and kid are now in the pit with him. I quite liked the left turn this story took, which made what would have been otherwise a typical corpse rising from the dead story into something more interesting.

Fifth is "The Night of the Corpse-Bride" by Doug Moench (story) and Xavier Villanova (art). Frank Tanner is surprised to find that his uncle Phineas has left him five million dollars in his will when he passed away.The will includes a strange requirement though, Frank must get married in three days to get the money! Frank didn't even know his uncle that well, who had been married himself but his wife died on his wedding night. Frank meets a young woman named Barbara and asks her to marry him and she surprisingly accepts! When she discovers the true reason though, she flees from him, even though Frank has fallen in love with her for real. Barbara runs from him in a stormy night, getting struck by a car, but continues going until she reaches a graveyard. There Frank realizes she is just a corpse and was actually the long dead wife of his uncle Phineas! This story had a pretty good twist to wrap things up. Still bewilders me why his dead uncle would care about him getting married that quick though.

Sixth is "The Assassin-Bug" by Al Hewetson (story) and Antonio Borrell (art). We see a giant bug attacking a woman on the splash panel, then go back in time to a soldier in Asia. In exchange for saving a girl, her father gives the soldier an assassin bug, a small bug in a tiny cage that he says has special powers. Our protagonist returns to America where he becomes a hired assassin, and in a difficult jam on how to kill a prisoner, uses the bug on him. He continues to use the bug to kill people, yet finds that the bug is growing while he is shrinking with each successive murder. Eventually the bug turns on him. As the story ends however we see this is all his imagination, he never actually saved the girl and has been laying in a cell having lost his mind. The final panel also reveals that before going to war he was a bug exterminator.

The issue concludes with "Monster Monster on the Wall!" by Augustine Funnell (story) and Pablo Marcos (art). This story is Funnel's Skywald debut; he would go on to become an oft recurring writer for them. A mere four pages, this story features a kid who is bullied and beat up as a kid for being ugly. Now an adult, he returns to his hometown where some of the bullies find him. Yet it being the full moon, he transforms into a werewolf and kills them! Although originally intended as a stand alone, this story would become a recurring series and we'll see more in the series soon.
Posted by Quiddity at 4:11 PM