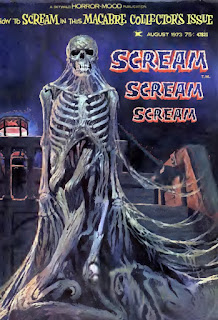 Today we see the premiere of Scream, Skywald's third horror magazine. With this issue Al Hewetson announces the start of phase 3 of the Horror Mood, focusing on the types of stories that the readership has claimed it wants. The cover is by Vicente Segrelles and it is dated August 1973. Overall this is a fairly strong issue to kick off this title.

First is "I, Slime" by Al Hewetson (story) and Jose Gual (art). An old man whose legs were shot off in the war works as a mailman, delivering mail to various places in the town including the local lunatic asylum. One day when he heads there he finds the woman who usually tends to him hanging upside down from the ceiling, with her throat ripped out. The lunatics have taken over and they grab a hold of him. They bring him to the top of a tower in the Asylum and drop him, and he splatters on the ground, dead. His remains are gathered and buried. But soon his remains, now just slime, make their way up out of the ground and to the Asylum, sealing the doors until the lunatics starve to death. This was a pretty good story including some real life photos used in the artwork. Although there is an easy work around for the ending, they could have simply knocked the doors down.

Second is "Weird Count, Black Vampire Bats and Lunatic Horrors" by Al Hewetson (story). Richard Arndt's "Horror Comics in Black and White" claims this story is drawn by Felipe Dela Rosa, but it looks much more like Fernando Rubio to me. This isn't a traditional story, but rather gets into superstitions, myths and realities about vampires, getting into facts about Transylvania, Vlad the Impaler and other matters.

Third is "This Archaic Breeding Ground..." by Al Hewetson (story) and Jose Gual (art). This story appears to be part of the Shoggoths series, although again appears to be more of a self-contained story rather than including characters from the prior stories. This story features a crew of men on a boat who head to Antarctica, using the book Necronomicon as a guide, and find an abandoned city. Continuing further on, they find a space craft and the beastly Shoggoths, as well as many human women with whom they have bred with. The captain of the group is horrified to find the Shoggoths have killed all his men and he flees back to his ship where the Shoggoths wait for him. Hewetson does a really effective job here writing an original story that really comes off like a Lovecraft story. Not just the plot itself, but the prose is very much like that you'd get from Lovecraft. Great job.

Fourth is "...Hickory Dickory Dock..." by Al Hewetson (story) and Ferran Sostres (art). Anthony Capelli is a young man who has lived in a mental institution since stabbing his Satan worshiping mother as a young boy. The day has finally come for the doctors to let him go. Anthony eventually comes across a screening of Dracula starring Bela Lugosi and becomes enraptured upon seeing a scene where Dracula proclaims himself unable to be harmed by fire. Incidentally enough the movie theater burns down, but Anthony makes it out okay. He makes his way to a costume shop and dresses up as Dracula, then bites the neck of the woman tending to him! He flees, making his way to a funeral home and continuing to think he is Dracula, lies down in a coffin. But the coffin is for a man slated to be cremated. As the story ends we can clearly see that Anthony is not Dracula as he is burned alive! This was a pretty good story with some good art and a hilarious ending. It is clear that the doctors never should have let him out of the asylum!

Next is the two page "Dracula" by Al Hewetson (story) and Domingo Gomez (art). This appears to be another part of the Scream Scene series and is a brief scene from Dracula.

Fifth is the premiere of the Nosferatu series with "Where Lunatics Live" by Al Hewetson (story) and Zesar Lopez (art). The titular Nosferatu summons various evil men to his castle, all of whom wear masks of various animals. Eventually one comes before them without a mask, Dracula himself. We go back in time to see Dracula's story and hear of how he was killed and his body beheaded. Followers of him are able to find his body and it resurrects, without a head! They then seek out his head and are able to find it, hidden away by the church. But it is soon revealed that they have been tricked and it is an ape's head! From there the narrative returns to Nosferatu and the group and the story ends. This is a pretty macabre story with some great art by Zesar. I wonder if this series will be more anthology in nature with each of the attendees telling their story.

Sixth is "The Tale of the Perfect Crime" by Al Hewetson (story). Again, Richard Arndt credits in his book appear off this as he has this being drawn by Fernando Rubio but it is clearly Felipe Dela Rosa (perhaps he mistakenly swapped stories in his book). A man plots to kill his annoying wife. One night he grabs her and forces her to consume poison until she dies. He then puts her in his bathtub and pours acid over her until her body dissolves. He laughs maniacally as the story ends and the narrator tells us someone has pulled the plug on his brain. An example of a story without much of a plot but is rather focused more so on concept and mood.

Seventh is "The Comics Macabre" by Al Hewetson (story) and Maelo Cintron (art). Frederick Werthem, writer of Seduction of the Innocent, which contributed to the Comics Code authority, along with authority president Leonard Darvin have come to the offices of Skywald. They are quite angry at the fact that their attempts to destroy horror comics, which was effective for so many years, is now being worked around by Skywald with its horror magazines. They meet with Hewetson himself, who refuses to stop making horror magazines, so they kill him with an ax. Just then, all sorts of monsters, including Dracula, a werewolf, Frankenstein's monster and original Skywald monsters like the Slither Slime Man and The Heap come out of the comics and attack the two men, killing them. This story is quite fun to read and includes several self-references to Skywald stories in this issue like "I, Slime" and "The Strange Painting of Jay Crumb", as well as a classic EC horror story, "Indisposed". In addition to the characters listed above it also features cameos from artist Maelo Cintron, Skywald publisher Herschel Waldman and writer Jane Lynch.

Eight is "The Strange Painting of Jay Crumb" by Al Hewetson (story) and Zesar Lopez (art). A group of critics decide upon the award for Best Illustrator. One such man is hesitant to give it to Jay Crumb, the one favored by the others and leaves. On the way back home he actually stops by Crumb's home and calling him a phony, decides to head inside. There he finds many horrific and monstrous paintings from Crumb, who start coming to life! As the story ends Crumb shows off his new painting, featuring said events. This story features references to artist Dela Rosa and well as Josep Toutain (called Jerry here), the head of Seleccionnes Illustrada.

The issue concludes with the one page "Scream" as drawn by Zesar Lopez and features what else, but a woman screaming.
Posted by Quiddity at 10:32 AM