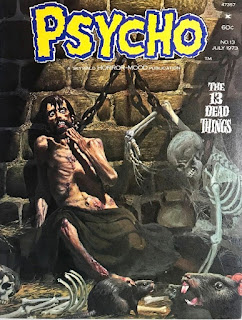 Today I'm covering Psycho issue 13, cover dated July 1973 and painted by Vicente Segrelles. The cover features the story "The 13 Dead Things", yet that story doesn't appear within! It will appear a couple of issues later in Psycho 15. Is it worth the wait? You'll have to wait until then to find out...

This issue's frontispiece is "Prologue to Horror" by Al Hewetson (story) and Domingo Gomez (art).

First up is "The Day That Satan Died" by Al Hewetson (story) and Felipe Dela Rosa (art). On a small plane traveling towards Calcutta, captain Jack Boivon goes back to speak to his passengers, the large Bob, photographer Herbert and a young woman named Patti who is quickly revealed to be a radical communist and hijacks the plane. When Jack's co-pilot refuses to purposely crash the plane like she demands, she shoots him in the head and the plane promptly crashes into a mountain. Amazingly enough, all four survive. Patti reveals that she made a deal with Satan for her youth and beauty to last hundreds of years in exchange for her soul, but she's running low on time until the deal is up and needs someone else to give up their soul to retain it. She figures her fellow passengers have no choice but to agree to it or freeze to death. But this soon blows up in her face as Bob reveals he's the abominable snowman, Herbert reveals he's a vampire, and Jack reveals he's Satan himself! Patti's body immediately rots away, but Bob and Herbert, angry at having to live as monsters promptly stomp and tear Satan to shreds! I love this story, in fact may consider it my favorite Skywald story so far. Its the perfect representation of Skywald's drastically different style from Warren, where Hewetson is willing to go so over the top, enough so that one doesn't mind at all that the ending is spoiled by the title. Dela Rosa's characters often come off as quite ugly looking but that is in service to a story filled with monsters and villains like this one. The character Herbert makes a reference to working for Pilote magazine, a real magazine based out of France which would feature work from Selecciones Illustrada artists like Luis Garcia.

Second is "Monster, Monster, in the Grave!" by Augustine "Funnell (story) and Pablo Marcos (art). This story is a sequel to "Monster Monster on the Wall!" from Nightmare #12. Our protagonist, a bullied boy who is now grown up, and a werewolf, has killed a few bullies that had attacked him. He next returns to one of his childhood homes where a couple of more men wait. He breaks through and slaughters them. Afterwards he flees, running into the woods and finds a pistol, which he loads with a bullet and shoots himself in the head! I did not expect that ending at all! I figure that's got to spell the end to this series, right?

Third is "Let's All Drink to the Death of a Clown" by Doug Moench (story) and Fernando Rubio (art). A man, Mr. Cade, is pursued by a knife wielding... clown! Flashbacks reveal Cade, owner of a circus, pursuing one of his employees, a young woman named Beth, who is engaged to the clown, Bob. Bob punches out Cade when he continues to go after her, but thinks he and Beth have a secure spot in the circus and Cade won't get rid of them. Cade eventually does kill Bob, then fires all the other clowns in the circus as well. As we return to the present, he continues to flee, pursued by the killer clown, and is eventually confronted by many of them and is stabbed to death... or is he? We find as the story ends that it was actually a novelty knife, so I'm assuming he died of fright? Clowns were always scary to me as a kid, so they fit being used in a horror story such as this.

Fourth is The Heap in "When Dies a Lunatic... Dies a Heap" by Al Hewetson (story) and Xavier Villanova (art). The Heap continues to go on a rampage in the subway, as we had seen at the conclusion of the previous story including killing a little girl. The Heap wanders off but is shot with some serum-infused shotgun shells which cause him to weaken and he is captured and transported via airplane. The Heap is able to break free of his bonds and jumps from the plane, landing coincidentally enough in the farm of his parents! They bring him in and the story concludes with The Heap at a dinner table with the two of them. And that, believe it or not, is the conclusion of The Heap series. Quite the odd and unexpected ending, that is for sure. I've read that Al Hewetson hated The Heap and wanted to get rid of him, which I assume led to these final two stories which were drastically different than those stories that had come before. The Heap was a recurring character that started up before Hewetson had even joined Skywald and didn't really fit the style of the magazines by this point, so I can get him ending it, although I wish he had done so in a manner that fit better with the stories that made up most of the series. The Heap ended up being largely a mindless monster towards the end, which simply wasn't interesting on a long term basis.

Fifth is the two page "A Taste of Human Flesh..." by Ed Fedory (story) and Ferran Sostres (art). Three men are lost at sea and start getting extremely hungry. They soon arrive at an island, only to discover it is full of cannibals! Two of the men are promptly cooked, but the last manages to escape, killing a native on his canoe and paddling away. Soon the hunger returns. When the man is eventually found, he has become a cannibal himself!

Sixth is "The Horror Within and Without" by Rich Buckler/Chuck McNaughton (story) and Mike Kaluta (art). This story was originally intended for the sci-fi magazine that Skywald cancelled, explaining why we're seeing a few collaborators we haven't seen in a Skywald magazine in a while. A man named J-1001011 (I'll just call him J the rest of the way) awakens in space, ordered to take part in an upcoming attack. J communicates with his ship's computer, which is ordering him to attack a city on a nearby planet. J also questions if there's any news of his parents but doesn't receive any response. J takes part of the attack and is able to successfully destroy the city as ordered, killing its inhabitants. When J returns he is told that his parents were killed in his attack! As the story ends his memory is wiped and he returns to sleep. A rather depressing tale, and I kinda knew from early on what the big twist would be.

Seventh is the two page feature "The Raven" by Al Hewetson (story, credited to Jessica Vogel) and Manuel (art). Even Richard Arndt's Horror Comics in Black and White book doesn't fully identify who "Manuel" is and if that's his first name or last name. This brief story features a man who comes across a raven on a tree branch who can speak! The raven asks him to kiss him and that it is a beautiful woman, transformed by a witch. Once he does so, she actually transforms into a beautiful woman, but he reveals he is a vampire and bites her! She has one last twist though, she has rabies, causing him to die from being unable to breathe. Yet another story in this issue that hammers home twist after twist, this was a pretty good, short feature.

Eighth is "The Taste of Carrion" by Ed Fedory (story) and Pablo Marcos (art). At a funeral, a man bemoans the death of his daughter, Greta, and blames some nearby demons for her death, and the death of other children. When another body is found, a mob gathers, convinced that they will find the monster responsible if they check the local mausoleum and castle. Upon going inside the mausoleum they find millions of flies, which are revealed to be the monster. The townsfolk are soon all killed by them. This story didn't make the most sense to me (It is really hard to follow at times) and also drags on a bit too much towards the end.

We wrap up with "Scream Screen Scene: The Mummy" by Al Hewetson (story) and Maelo Cintron (art). This is the start of a recurring feature in Skywald where they show a brief scene from a famous horror movie, but due to copyright don't exactly adapt the scene but rather use a similar one. In this case its the Mummy and features some archaeologists excavating a mummy, which immediately comes alive and attacks them.