Vicente Segrelles provides the cover for this issue of Psycho, cover dated July 1972, featuring the interior story "The Asylum of Frozen Hell". 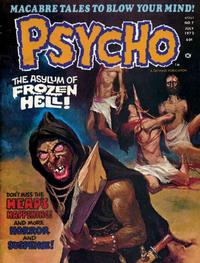 We kick things off with the one page frontispiece drawn by Pablo Marcos, "Pit and the Pendulum" featuring the pendulum scene from Edgar Allan Poe's story of the same name.

This issue's first story is "Kerene" by David Anthony Kraft (story) and Domingo Gomez (art). A man is sacrificed by some priests. Upon being stabbed he finds himself in another realm, perfectly fine, with a beautiful naked woman named Kerene, who says she was his love and his name is Kying. She tells of how he was a hero but the evil Narhlis seeked to usurp his powers. He convinced Kying to attack some forest dwellers and during the battle slain him, claiming Kerene for himself. Now, his worshipers sacrifice people. Kying awakens, back to reality as he is being dragged along by some of the worshipers, but is still alive, knowing that Kerene has kept him alive. Abrupt ending aside, this is a fairly strong start to the issue. Domingo Gomez, making his Skywald debut here provides some strong art. In fact his style reminds me quite a lot of Luis Garcia, who was my favorite of the S.I. artists who worked for Warren. His story includes some highly detailed, realistic panels and others that are looser in nature for the more romantic scenes, much like what Garcia would do.

Next is another story drawn by Domingo Gomez, "Horror Has 1 Thousand Faces!", written by Al Hewetson. The famous actor Lon August is celebrated at a dinner. August is a famed movie actor who has starred in numerous horror movies, wearing various forms of makeup. In his 50 years as an actor, no one has seen his real face. We find out that even August's wife hasn't seen his real face and when she tears it off, reveals a horrific, skull-like face which causes her to have a heart attack. But even this is revealed to be a mask. At the dinner people grab a hold of August, demanding to see what he really looks like. They tear off the bandages he's wearing, revealing that his face is completely blank! My favorite story of the issue, Domingo provides another strong art job. This story seems like a dedication to Lon Chaney, the silent film-era movie star who played numerous monsters (most notably the Phantom of the Opera), often undergoing a lot of make-up to do so. His attire at the dinner is based on that of the titular character in the movie The Invisible Man.

Third is "The Family Jewels!" by Dennis Fujitake (story & art). Lester is a wealthy hunter, who in the jungles of India saves a woman and her child by shooting a tiger. She leads him to her village, that of the Rapo, a tribe that is supposed to possess prized "family jewels". He meets Tun, Chief of the village and husband to the woman. He says he is indebted to Lester and will reward him with his most prized possession. Lester thinks he will get jewels and as he eats some food, Tun tells him of how his tribe came from the cold north and due to some radioactive particles in the fish they eat only have one child for every ten couples. Upon finishing his meal, Lester is told that he was given Tun's most valuable possession, that he has eaten his son! Lester feels sick (presumably from the radiation) and dies. Quite a big twist to wrap up this story! Fujitake as usual provides a strong story and art.

Fourth is The Heap in "A Spawn of Satan" by Al Hewetson (story) and Pablo Marcos (art). Ross Andru has now also departed from The Heap, with the writing handed over to Hewetson and Marcos now handling the art solo. The Heap takes on some men in the woods, then makes his way to the chemical plant that was responsible for his mutation. When a lightning bolt strikes a vat of chemicals, the Heap is covered in them, but they actually transform him back into his human form of Jim Roberts. Jim returns to see Laurie, but finds that when night arrives he turns back into a more human-looking version of the Heap. After transforming again in public, he decides to head on a ship that is going out to see, living off of rats for weeks until he is found. He is brought before the captain, but then suddenly a giant squid attacks! The Heap fights the squid and is successful in killing him then is washed ashore as the story ends. Some interesting developments here with the Heap's transformation now somewhat inspired by that of a werewolf (although it doesn't require a full moon, just nighttime). I did prefer the Heap's original design though.

Fifth is "The Terrible Tragedy of the Tormented One!" by Marv Wolfman (story) and Pablo Marcos (art, credited to "Elder"). I wonder if crediting of Marcos was a typo, or intentional, given that he has so much content in this issue (3 stories and 2 frontispieces). A woman named Cheryse runs through a dark mansion as an axe wielding monster pursues her. Suddenly a man arrives, seeking to get some peace and quiet. Our protagonist rescues her and the monster flees. Cheryse reveals to him that the maniac was her fiance Paul, who refused to let her leave him and crashed their car into a river. When Paul came out of the river he was transformed into the monster. Paul returns but our protagonist hits him with an axe to the chest. Paul then turns back to human and claims Cheryse has lied. Cheryse is revealed to be a succubus, and tries to suck the life force out of our protagonist, but is slain by him. A pretty decent story with an interesting twist at the end. There is an error on one of the panels on the last page where a word balloon was included but there is no dialogue in it!

Sixth is "I Am Demona: The Feastings of Prince Yamm" by Gardner Fox (story) and Steve Englehart/Vince Colletta (art, Colletta uncredited). Demona is the daughter of a human man and a witch alien mother as explained in the prologue. She acts as a kind of sorceress superhero. In this story while about to go on a date with her friend Jim Croft, she feels a ghastly aura and heads to a tower where a woman is being sacrificed to the great Yamm. The High Priest there has her seized by skeletons, but she vanishes, then researches things with Jim, finding that if enough sacrifices are made to Yamm, he can stay on the Earth forever. She returns to the tower to battle the high priest and defeat Yamm. I've never been much of a fan of superhero comics and this comes off much like one, even though it has a supernatural element. In most issues this would be the weakest story, but just wait til what we have later!

Seventh is "The Asylum of Frozen Hell" by Al Hewetson (art) and Pablo Marcos (story). This story has an interesting art structure in that you see things from the eyes of the protagonist. I don't know if I've ever seen this style used before in a comic book story. Anyway, you act as a newspaper reporter, who heads to a weather station in the arctic in pursuit of a story, along with a female colleague. Upon arriving you find many dead bodies and then head to a nearby cave. There you find a ranting humanoid alien monster who appears to be blind. He rants on how he was ordered to come here to dump some mutants, but he never got picked up to return. All around him are men that are tied to stakes in the ground. You battle the priest and your woman colleague stabs him in the back. Upon approaching one of the tied up men it is revealed they truly are mutants and were responsible for the dead people at the weather station, with you joining them!

Eighth is "Forewarned" by Jim Pinkoski (story & art). This extremely confusing two page story features an astronaut coming across a strange object in space. He starts drilling into it and hears voices. Then there is an explosion. The final panel shows what I assume to be some sort of craft floating in space, but I can't really tell what is going on with it as its drawn so small. I got no clue what Pinkoski's point was in this story, both the writing and the art make it very tough to figure out what is going on.

Ninth is "The Discombobulated Hand" by Al Hewetson (story, credited to "Wood") and Ramon Torrents (art). Another big disappointment, this is a three page story featuring a television reporter advertising the hand of the title, which can be used to hold jewelry, gloves, ties and many other purposes. He and his colleague complain about things after the TV spot is over. Torrents' art is strong as always, but this is another brief story where I don't understand the point at all. Quite a mediocre last couple of stories to finish out the issue.

The issue concludes with a one page pin-up by Pablo Marcos of a hooded skeleton.
Posted by Quiddity at 6:30 PM