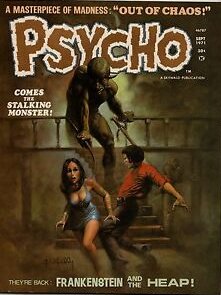 The one page "Innsmouth Apparition" frontispiece is provided by Larry Todd.

First story is The Heap in "Night of Evil" by Ross Andru (story) and Ross Andru/Mike Esposito (art). The Heap watches as the authorities bring bodies of corpses from the last story, including Hitler, to his friend Monty Elliot to investigate. After they leave The Heap reveals itself and through writing to him, Monty realizes it is his friend Jim and agrees to help him try and turn back to human. When Monty's daughter arrives, The Heap hides and leaves. He comes across some thieves who have kidnapped a woman and had witnessed him fighting zombies in the previous story. He attacks them and frees the woman, but falls into quicksand, sinking as the story ends. A big cliffhanger to end the story, but I'm sure the Heap will make it out okay and this storyline will continue.

Next is "Out of Chaos... A New Beginning" by Marv Wolfman (story) and Rich Buckler (art). This story is quite the mess, the weakest of the issue. The universe is being destroyed, and Satan is upset. He summons an Oracle whose face shocks him any time he looks upon it. Satan leads an army to the surface where they battle forces led by a man named Hyperion, who Satan slays. Meanwhile a group calling themselves the Procreators of Eternity are creating a universe in the shape of a fetus. The ending of the story says it will be continued in the next issue, so looks like we'll get at least one more segment for this, which I'm sad to see!


Third is "Museum Piece" by Len Wein (story) and Serg Moren (art). Andre Lamont owns and manages a House of Wax. His son Louis had been in a car accident years before and is quite ugly and a hunchback as a result. At the time of the accident, the doctors thought he was done for, but Andre was able to help him recover through unrevealed means. The arrogant Louis wants to go to America to form his own Wax Museum when the opportunity arrives, but Andrew refuses and Louis attacks him. Louis decides to set the place aflame and start anew in America, but finds he is made of wax himself and melts!


Fourth is "Comes the Stalking Monster!" by Tom Sutton (story) and Tom Sutton/Syd Shores (art). The story is credited to Larry Todd, and Sutton goes under the pseudonym David Cook here. Usually Sutton dominates in any collaborative efforts, but not here: I hadn't realized he even worked on this story until I looked up the credits. Dr. Aleister Kohner is obsessed with the occult and along with his girlfriend Erica summons the demon Asmodeus in a pentagram. Asmodeus agrees to teach him the knowledge of the ancients, which he does. However over several weeks Al finds himself growing weaker, his hair losing color and falling out. He summons Asmodeus who reveals that radiation has been emitting from the pentagram. Erica, having worn a pentagram necklace is unharmed and at story end is revealed to be the master of Asmodeus.

Fifth is "Escape" by Dennis Fujitake (story and art). This is a brief 2 page story. The evil Baron Renphrew is captured and chained to a wall in a dungeon. He plans on getting away by having men he paid for dig him out. They are able to dig into the dungeon, but break their way through a stone above the Baron's head, which crushes him! A brief, fun story. Fujitake's art reminds me a lot of Jeff Jones. We'll be getting more quality work from him in the future.

Sixth is "Plague of Jewels" by Bruce Jones (story and art). A pair of men, Gary and Wayne, make their way through the jungle with some jewels they have stolen. They find an Incan idol which upon touching causes them to fall into a chasm. Wayne has broken his leg and needs some help from Gary. They make their way to a massive pile of treasures and the two fight each other, with Gary killing Wayne. Suddenly a group of walking skeletons come before Gary and bring him to a chamber where a beautiful woman awaits, her face masked. She claims to be Princess R-Shann, last of the Incan nobles and wants to marry him, his blonde hair matching that of the legends of those she was to marry. Upon marrying her though, she removes her mask, revealing a rotted face. Gary flees, but trips over Wayne's grave. The Princess tears his eyes out and he remains there beside her. This story kinda goes all over the place, but I particularly liked the last few pages. Jones provides quite a strong art job.


Seventh is Frankenstein in "Freaks of Fear!" by Tom Sutton (story) and Tom Sutton/Jack Abel (art). Frankenstein's monster desires to learn about his past before he became a monster. He comes across a group of freaks and stays with them, covering his face. One of them is a beautiful woman, Lilith, who is blind but can see the past and future. The monster has her look into his past, but he is then drugged by the head of the Freak Show, who removes his mask and puts him on display at Notre Dame cathedral. There, Quasimodo the hunchback, steals Lilith, causing the monster to go after them. The monster falls as the story concludes. Meanwhile, Dr. Victor Frankenstein (his name now changed to Henry) finds himself revived by his own teacher, Dr. Pretorius, but only his head! Unlike Sutton's earlier collaboration with Shores, this is quite obviously his story, and it looks a lot like a solo effort, even though Abel is credited for the inks. Henry's face seems totally restored at story's end, which is odd, as he had a freakish appearance in the prior story.

The issue concludes with a one page pin-up of The Heap by Bill Everett.