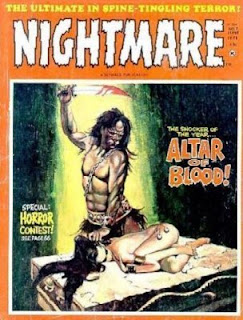 With this issue of Nightmare, the Spanish invasion for Skywald truly begins as we get the premiere of several artists from Selecciones Illustrada, the Spanish art agency led by Josep Toutain that also became a mainstay at Warren too. The cover for this issue is by Pujolar, who never did an original cover for Warren, but did have a cover of his reprinted for its second to last issue (eventually we would see a Skywald cover for the last issue of Creepy!). This issue is cover dated June 1972, 6 months after the previous issue.

This issue's frontispiece is "The Haunted Strangler", drawn by Pablo Marcos and showing a scene from the movie of the same name, starring Boris Karloff.

The issue kicks off with "The Penitent" by Ed Fedory (story) and Ferran Sostres (art). This story features an old man named Taylor, who is in a cell contained within the side of a mountain. He is visited by a man on a flying dragon named Nekkron, who tells them there is still hope for him with "the wise one". Later Taylor hears a voice from a glowing sky that calls for him to kneel and when he does so his physical body collapses and his spirit rises out, flying away with Nekkron. The story's final 2 pages reveal that Taylor is a prisoner in the real world on death row, but when a prison guard comes to his cell he finds the odd looking remains of his body. Sostres, making his Skywald debut does a fairly good job here, a suitable style for this type of story. Yet the story itself I feel is just too similar in in its ending to what we got from Fedory in "Sand Castles" from Psycho #6, the previous issue I covered. I'm hoping Fedory can find some variety as he continues to produce more work for Skywald.

Next is "Group Jeopardy" by S.F. Starr (story) and Amador Garcia (art). In a remote mountain resort, Dr. Blaine leads a number of patients of neurotics. One of the women there is killed, every bone in her body broken. Blaine believes one of his patients must be the killer and the sheriff recruits a fitness expert, Dr. Coxe, who says the killer killed her with a bear hug, hugging her with such strength that her bones were battered. They test the muscles and strength of the patients not finding any of them powerful enough. Blaine believes in a great fury, someone could have superhuman strength and kill. Blaine has his patients come to him one at a time and he torments them. Eventually one of them, a young woman named Iris goes on a rampage, killing Blaine (or at least hurting him). In the quite confusing last few panels, it seems like she is held back by the Sheriff and Coxe, but I can't really tell for sure, then she says she loves one of the other patients and the story ends. Amador, also making his Skywald debut provides some strong art but the story itself is a confusing mess, especially the ending.

Third is "The Giant Death Rat" by Al Hewetson (story) and Serg Moren (art). The writing for this story is credited to Howie Anderson, a pseudonym Hewetson would use often over the years, much like say. Will Richardson for Bill Dubay. In contrasts to the several first appearances in this issue, this will be the final appearance of Moren, who has done some decent work in his prior stories. This story opens in the 1700s with a tale of a number of rats trying to make their way to America by climbing aboard ships. We then go back, focusing on the ship Sumatra, where a rat is discovered by someone, but is unable to be caught. The captain fears this will spread disease, and soon one of the crew members gets the plague. The disease spreads, although no one is ever able to find a rat. Eventually the entire ship catches on fire and burns away with only a few people making it out okay. As the story ends, we find the rats talking to each other, happy that none of them ever actually went on board the ship due to the plague.

Next is the 3 page "Gasp!" by Donald Brown (story and art).A man has a nightmare about being dragged along by a number of humanoid monsters. Upon awakening he realizes that this is a perfect plot for a horror story and starts writing it. In his story, his character is a scientist that goes to another dimension where hostile beings grab him, thinking he is instead a spy of their enemies. He is then thrown into the pit of a giant monster. As the story ends, one of the humanoid monsters awakens in his bed, revealing it was a dream of his, and he has his own horror story he's writing! A pretty decent ending here, with some rather average to lousy art from Brown. The third to last panel of the story features a rather obvious swipe of a panel from the Al Williamson drawn story "By George" from E.C.'s Weird Fantasy #15.

Next is the cover story "The Altar of Blood" by Bob Kirschen (story) and Pablo Marcos (art). The demonic queen, Tonia, calls forth slaves to her in hell. Tonia desires Satan's powers and hopes for him to cringe before her voice. Any slave that speaks up against her is destroyed. Soon Satan himself arrives, but is unable to pass beyond the forces protecting her lair. Tonia requests one of her slaves bring the sword of Lucifer down on her neck. Every 5,000 years, the stars align, leading all to a single moment.  But the slave momentarily hesitates, staring at her beautiful body, and that is enough for the moment to be missed and Tonia meets her end for real as the sword comes down upon her.

Sixth is "A Father's Lament" by Ed Fedory (story) and Francisco Cueto (art, credited here as Frank). A father and son pair of hunters come across a body in the woods with an axe buried in its chest. Along with the body is a journal. The journal tells of how a man hunted a beast attacking the local populace. The writer created his axe, pursued the beast and killed it, even though it was his own son! Back in the present, the father removes the axe from the body, revealing it to be silver. Desiring the money the silver can bring him, he tells his son they are leaving, without even burying the body. This turns out to be quite the mistake, as the beast was a werewolf, and pulling out the axe causes it to return to life! The premiere of yet another S.I. artist, Cueto's work is drawn quite well in some panels, but a lot looser and lower quality in others. He also doesn't do the best job on his werewolf. But the story at least is pretty decent, and Fedory finally leaves behind the gimmick he'd be using on his other stories.

Seventh is "Artifacts" by Dennis Fujitake (story and art). The third world war has hit, and mankind is no longer the dominant species on the Earth. They have left their sacred relics in a cave and head off to meet their final destiny. Many years pass. The Earth becomes covered in ice, which eventually recedes. Eventually a group of lizard-like aliens arrive on the Earth and find a crucial artifact of mankind, a film showing Porky Pig! This is quite a fun story to read in its brief four pages with a hilarious ending. The story as well as the style of the aliens reminds me a bit of an old E.C. story, "The Aliens" from Weird Fantasy #17 where lizard-like aliens land on a part of the destroyed Earth and find one of the few remaining relics of humanity. a comic book.

Our final story is "The Essential Horror" by Al Hewetson (story) and Ramon Torrents (art). It is the year 2056. A pair of mercenaries, dressed in special gear, arrive at the underwater city of Pala. Nearly 80 years before, the founders of Pala, seeking to escape the pollution on the surface, created a civilization underwater, which has now grown to 300,000 people! However a mutated squid has attacked their city, warranting the calling of the mercenaries. The mercenaries are able to defeat the squid, but are unable to stay in the city. As the story concludes and we see what they look like under their gear, we know why; those on the surface are horribly deformed due to all the pollution. A fairly decent story which is all the more impressive with the art from Ramon Torrents. Torrents was quite a prolific artist over at Warren, and one of my favorites, and he is one of the few S.I. artists who contributed to both Warren and Skywald, although he does quite a lot more stories for Warren than Skywald.

The issue concludes with a one page drawing of a mummy by Pablo Marcos.