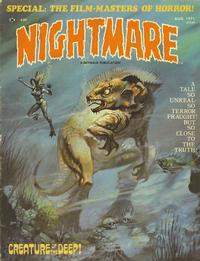 The cover for this issue's story is provided by Boris Vallejo, illustrating the interior story "Creature of the Deep!". This issue is cover dated August 1971. Oddly enough, issue 5 of Nightmare came out before issue 4 of Psycho!

First is "Slime World" by Chuck McNaughton (story) and Ralph Reese (art). A couple, Sidney and Susan, make their way into the Parisian sewers after a mysterious man tells them to follow them. Underground they find a race of people who have been mutated by the slime in the sewers. They capture and mutate people, either joining their forces, or serving them as food. Sidney and Susan escape their bonds and split up, and after a few weeks Sidney starts transforming into one of the mutants, both physically and mentally. Eventually he is permitted to become someone who tricks people into following him into the sewers, much like what originally happened to him. A strong way to kick off the issue, Reese also provides some good artwork.

Second is "Whence Stalks the Werewolf" by Len Brown (story) and Carlos Garzon (art). Dr. Allan Bund has found a way to transport is patient's consciousness to the past. Using this ability, he has him go back further in time, including military battles and even a werewolf appearance! His colleague Dr. Tracy wants this to stop and leaves to get the police. However once he has come back, we find the patient has turned into a werewolf for real and goes on a rampage! Garzon provides some good art here, reminding me somewhat of Eugene Colan, but I didn't particularly care for the story, nor its predictable ending.

Third is "The Doom Star!" by Chuck McNaughton (story) and Tom Sutton, Dan Adkins and Ralph Reese (art). It is the year 1000 A.D., and many are in fear of the doom star, a comet that crosses the skies. As chaos reigns supreme, the knight Berthold carries a diplomatic message with him, hoping it will unite Europe. Eventually upon seeing a woman being burned at a stake, he slays those doing it and brings her with her, treating her as his property. Suddenly a bizarre group of humanoid animal-like knights attack him. They eventually reveal they are aliens, and that the doom star comet is actually their spaceship. In the stars, alien races live in peace, but they have found that isn't the case here on Earth. Berthold will need to bring peace among man and animals; Earth can be welcomed into the fold if he succeeds, or destroyed if things get worse. Berthold rides off, eager to spread the message, only to get immediately shot and killed by some burglars. This story took a bizarre turn in the second half, but is quite good, despite the downer ending.

Fourth is Creature of the Deep" by Chuck McNaughton (story) and Jack Katz/Jack Abel (art). The oceans have become dreadfully polluted, and a Professor Daniels is given grant money to fight said pollution. Daniels' team released radioactive material into the ocean, thinking it may help bring more things to life, but instead it results in horrifying mutations. Mutated sea creatures terrorize the world, forcing military intervention and even the Russians dropping nukes on them! As the story ends, Daniels heads to the hospital where his wife has given birth to his son, who was born a mutant due to the polluted water.

Fifth is "Nazi Death Rattle" by Al Hewetson (story) and Serg Moren (art). A Nazi boot camp in 1943 is plagued with several deaths. The commander, Snookler, brings in an S.S. officer to help them find the person responsible. Said S.S. officer immediately turns on Snookler as he was born in Austria, not Germany, and starts purging the camp of anyone not German. Eventually he tortures a man who claims Snookler is behind it all, and Snookler is executed. The S.S. officer knows this is all a ruse though and demands the man show him where the real killer is. The man leads him to a cabin where hidden rebels kill all the officer's men, then Snookler, revealed to be a vampire, kills him.

Sixth is "Within the Torture Chamber" by Kevin Pagan (story) and Doug Wildey (art). Wildey does a good job here, providing artwork that reminds me of Angelo Torres. The story takes place in Spain in the 16th century, where a woman is executed by torture, after having had her tongue torn out. The judge and executioners leave only for a noble, Don Alexander to come down, and speak to her body, revealing he falsely had her accused because she spurned him, resulting in her execution. The judge, who had heard it all fights Alexander but is slain by his sword. Alexander flees, but goes back for his sword, not wanting evidence left behind. He starts getting quite nervous however, and the judge rises, tearing out his tongue and chaining him to the wall. The ending to this story was somewhat confusing (I have included my interpretation here). I fear that these confusing endings will just get more and more common as I make my way through these Skywald issues...
Posted by Quiddity at 4:19 PM