Boris Vallejo provides the cover for this issue of Psycho, covering the interior story "Dreamer Beware!". This issue is cover dated November 1971. 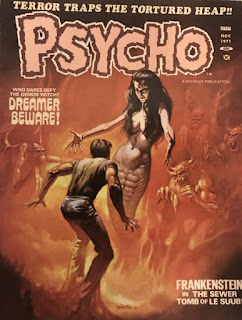 The frontispiece for this issue is "A Psycho Scene" by Bill Everett. This is a pretty good piece of work, showing a humanoid earth-worm monster!

First story is "Let the Dreamer Beware" by Jerry Siegel (story) and Ralph Reese (art). Alex's wife Florence makes his life absolute hell and refuses a divorce. Alex dreams of being in another realm filled with beautiful people. One of them, Dileeth, says she loves him, but he is suddenly whisked back to reality. Dileeth tells Alex he can return by killing his wife, so he poisons her with rat poison. Upon falling asleep he is back in the realm, but now the facade is gone and all the beautiful people are now demons, including Dileeth! Alex wakes and tries his hardest to not fall asleep, even after being arrested and brought to jail for Florence's murder. Eventually he does fall asleep and the demons throw him in acid, which also affects his body in the real world. Not being able to go to sleep is quite a scary thing! Especially since it is so easy to unintentionally fall asleep when tired.

Next is "Power of the Pen" by Doug Moench (story) and Doug Wildley (art). The author Jeff Dennings is working on a new book, having already written a few characters. Having named his lead character after his friend George, Jeff is shocked to find that what he writes actually happens to George in real life! George is sent to the hospital, having been struck by a car and is investigating a drug ring under cover, but Jeff decides to write things such that he forgets about all of this and decides to change the name of his character to someone else to prevent any future events from occurring. He then smashes his typewriter, thinking it is responsible for this. Jeff soon realizes he named a character in another story of his after his friend Sandy. He goes to her apartment, to find hers trapped in a mirror, and gets trapped there himself, much like in his story.

The Heap returns in "Cavern of Doom" by Ross Andru (story) and Ross Andru/Mike Esposito (art). Having been absorbed by quicksand, the Heap finds himself in an underground cavern with some mutated humans. He fights one of them, beating it to death, then is declared their new leader. This enables him to leave the cavern to recruit others to join them. He returns to his friend Monty Elliot's house where Monty tries an experimental antidote on him. Suddenly the police sheriff and one of his men arrive. They chase the Heap back to the caverns, where the mutated humans are waiting to grab them. As the story ends, we find that the antidote at least partially works as the Heap's hands turn back to human!

Next is "The Unholy Satanists" by Al Hewetson (story) and Serg Moren (art). The story begins with the burying of a woman named Lorna. We flashback to her husband being killed in an accident and Lorna moving to the country with her son. She is approached by some women worshiping Satan who get her to join their cult. She is permitted to ask for something, and asks for her husband back from the dead. Yet, similar to the classic story the Monkey's Paw, her husband returns as a rotting corpse! He attacks her and her brother beats the corpse to bits. Lorna is then mistaken for dead and buried alive! A rather confusing ending, but Moren provides some good art at least.

Next is "Out of Chaos... A New Beginning" by Marv Wolfman (story) and Rich Buckler (art). This is the conclusion of the story started up in the previous issue. This story is more confusing nonsense as we have the convergence of two worlds, a giant battle between the forces of Satan and the Procreators of Eternity, and it ends with a baby named Sage becoming God! Total absurdity.

The issue concludes with the latest story in the Frankenstein Book II series, "The Sewer Tomb of Le Suub!" by Tom Sutton (story) and Tom Sutton/Jack Abel (art). Where we last left off, Frankenstein's monster fell down a bell tower in a fight with Quasimodo in Notre Dame cathedral. The monster finds himself in the sewers, where he is brought before Le Suub, a giant octopus-like monster that tries to take over his mind. The monster instead fights against this and is reunited with Lilith by story's end as they find themselves in a dead end. Meanwhile, Henry Frankenstein's head is convinced by Dr. Pretorius to show him how to bring someone back from the life and he does, but the creation runs amok, attacking him with a cleaver. Yet due to being immortal, Henry is still alive, even with a cleaver in his head! This series continues to get more and more ridiculous, which I love!

Aside from the horrible Out of Chaos story, this is a fairly strong issue. The Heap and Frankenstein monster serials continue to be a lot of fun. I hadn't realized that Skywald had successfully utilized the serialized storytelling format a few years before Warren would start using it in Eerie. Although the smart thing Warren did was (for the most part) give these continuing storylines endings and not dragging them out; I do wonder if we will get that here with Skywald.