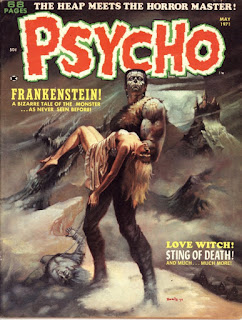 Boris Vallejo provides the cover for this issue of Psycho, featuring Frankenstein's Monster. This issue is cover dated May 1971. Gone are the text story and the one page gallery feature this time, with the Frankenstein and Heap stories being longer than usual.

First is "Frankenstein, Book II: Chapter One by Tom Sutton (story) and Tom Sutton/Dan Adkins (art). Sutton is again credited as Sean Todd. The story continues on from the original Frankeinstein novel, although it uses the famous Frankenstein Universal monster movie look for the monster character. The monster, finding the body of Victor Frankenstein is dedicated to bringing him back to life as had been done to him. He eventually returns to Victor's laboratory and with help from Egor (who if I remember correctly wasn't in the original novel) tries to bring Victor back to life. The castle is struck by lightning, destroying it, but causing Victor to return to life. Upon heading to the village asking for help, he is instead hacked to pieces by the townsfolk! Victor's old teacher, Dr. Pretorius desires to bring him back again, and the story ends with the Frankenstein monster revealed to be still alive under the castle's rubble. A fun kick off to what will become a recurring series; I particularly like the scene when Victor realizes what's happened to him and flees from the townsfolk.

Next is "A Coffin for Captain Cutlass" by Gardner Fox (story) and Serg Moren (art). The captain Don Miguel Fuentes De Cordoba seeks to take down the titular Captain Cutlass, carrying a sealed coffin with him. Upon coming across Cutlass, he binds him, and opens the coffin, revealing a giant monster. Cutlass's lover Marian sets him free and he is able to get the monster back in its cabin. He seeks an alchemist, who enables the monster to speak and tell its tale. Cutlass eventually finds the ship of Don Miguel's and sets the monster loose on him, then sets the ship aflame, destroying the monster for good as well.

Third is "The Heap Meets the Horror Master!" by Chuck McNaughton (story) and Ross Andru/Mike Esposito (art). Where we last left the Heap, he was trying to find his old friend Monty Elliot, hoping he could turn him back human. While traveling through the woods, The Heap frees a deer he was initially thinking of eating, then comes across a cabin where he slobbers down a dead rat and garbage. He is soon found by a man calling himself the Horrormaster, who has found the ability to raise the dead. The Heap is brought into his lair, where the corpses of some of the most famous evil people in history are, such as Attila the Hun, Rasputin, Caligula, Giles de Rais and others. The Heap defeats many of them and breaks free, finding the Horrormaster now resurrecting Hitler! The Horrormaster sends him to grab a family with two corpses, but the Heap rebels, getting into a big battle with numerous corpses and eventually breaking the horrormaster's staff and following him up a mountain where an avalanche crashes on the both of them. The Heap is revealed to be alive and continues on his quest to find Monty.

Fourth is "Gruesome Crewcut!" by Chic Stone (story & art). This hilarious (albeit quite gruesome) 3-page story is my favorite of the issue. A young boy named Jeff has girly long blonde hair. His father is angry at him, demanding he get a haircut. Jeff instead runs away from home. After several hours, he decides to go asleep under a tree. A mysterious pair of ghouls, Arnie and Rufus appear. Arnie has a bald, corpse-like head and desires Jeff's hair. As the story ends, Jeff has returned home, his entire scalp torn off and Arnie happily displays his new hair.

Fifth is "The Man Who Stole Eternity" by Gardner Fox (story) and Bill Everett (art). A thief named Mike kills a man in an alley and steals a pearl necklace from his wife. He hears that he can make a lot of dough by stealing from a Magic Museum. However upon going there he finds a variety of monsters that draw him into a realm of even more monsters! Eventually he sees the woman he stole from, revealed to be a sorceress. She demands he steal her the elixir of life which he agrees to, especially after she sends some monsters after him while he sleeps. He successfully steals the elixir, and wanting eternal life, drinks some before giving it to her. A couple of days later, Mike finds himself completely unable to move. He is declared dead and is buried, alive! While he has eternal life, he has to spend the rest of it in a coffin!

The issue concludes with "The Love Witch" by Marv Wolfman (story) and Ernie Colon (art). Colon, one of Warren's most commonly appearing artists during its down period of the late 60's and early 70's is credited here as Jack Purcell. The titular witch, Burnick kills numerous priests at Stonehedge and rides the giant lizard Friji. She dreams of a warrior killing Friji and sucking up her youth, turning her into an old lady. Eventually the warrior appears for real, killing Friji and she finds herself aged due to fearing his arrival. The warrior reveals himself to be Morpheus, God of Dreams. Then suddenly, in the final page things become a confusing mess, Burnick is young again, Morpheus flies away but she suddenly causes him to burst into flames, or at least that is my interpretation of what happened. I wonder if this is intended to continue into a future story as that would help this make more sense.
Posted by Quiddity at 8:31 AM

Since you've been gracious enough to leave comments about our various blog mutterings, I thought it only fair to reciprocate. I'm going to go back and read all your Skywald critiques just as soon as I get through with this perfectly horrible Creepy #25! Best of luck getting through Skywald. I read a lot of them back when they come out and some of it can be just about indecipherable.

Thanks, great seeing you here! Having read ahead a few issues from what I've posted so far, I can say "Indecipherable" is a good way to describe many of these Skywald stories!