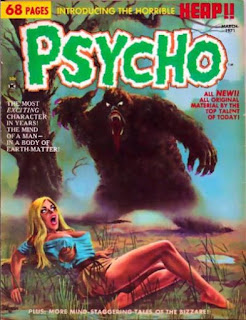 Upon opening this magazine I'm surprised to realize that its all new material, and we have already finished the reprint era. A good start! Hector Varella provides the cover for this issue cover dated March 1971.

The issue kicks off with "The Heap", the first appearance of a character who would be one of the longest running in the Skywald magazines and was also featured on the cover. This story is written by Chuck McNaughton and drawn by Ross Andru/Mike Esposito. Jim Roberts is living a wonderful life as a crop duster, about to get married to his fiance Audrey. However while piloting his plane one of the cables doesn't work causing him to crash in a forest where nerve gas is being used. The combination of the fire and gas transforms Jim into the horrifying The Heap. The Heap makes his way through a road and a graveyard, eventually coming across his own funeral where he realizes his friend Ryan set him up, selling him and his fiance a life insurance policy then screwing around with the cables in his plane so Jim would die and he can be with Audrey, collecting the insurance money. The Heap goes on a rampage against Ryan, Audrey and his underlings. As the story ends, The Heap wonders if his friend Monty Elliot may be able to find a cure for him.

Second is "To Laugh Perchance to Live" by Chuck McNaughton (story) and Jack Katz/Rich Buckler (art). Steve Weston, a man living in Manhattan suddenly finds himself transported to another world. Once there a large group of monsters call for him and start fighting each other over him, claiming they want to bring him to his throne. We see several pages of very bizarre monsters fighting each other and eventually Steve is brought to the throne, which has images in his likeness. He agrees to become their ruler and starts laughing, and we see him back in the real world, laughing maniacally. Was Steve crazy the entire time? Perhaps. In any case I enjoyed this story quite a lot with all the weird monsters in it fighting each other over him.

Third is "Death's Stranger" by Marv Wolfman (story) and Tom Palmer (art). Arthur Ashe has come up with a formula that will allow man to live forever. His scientific colleagues want him to destroy it, but he instead kills all of them, then uses the formula. However, the ghosts of his slain colleagues appear to torment him. Many years go by. Arthur enjoys eternal life at first but eventually comes war and he finds himself the last remaining human. The years continue, Earth reverts to prehistoric times including roaming dinosaurs. Arthur eventually decides to accept death and the ghosts of his slain colleagues bring him into a grave they have dug for him.

Next is the one page "Psycho's Gruesome Gallery: The Vampire" a one page feature drawn by Steve Hickman.

Next is "Revolution" by Rick Margopoulos (story) and Tom Sutton/Dan Adkins (art). Sutton is credited here as Sean Todd. Wary of the wrath of James Warren, who was viciously opposed to any of his artists working for the opposition, we will see several American Warren artists do stories for Skywald under pseudonyms. We'll see that also for this story's writer, Rich Margopoulos, who goes as "Rick Poulos" here, although Margopoulos would not become a mainstay at Warren like Sutton had been for a little while longer. On the Planet Sade slaves are constantly forced to fight in "games", battles in a coliseum against giant monsters. The King, upon hearing of a possible rebellion instead, desires more slaves to fight in more games to quell the populace. So the games become more and more severe, leading to a revolt by the citizenry, who also release all the monsters. The King and his men are forced to flee the planet on a spaceship, landing on another one where carnivorous plants soon attack them. The men flee towards what appears to be a city sitting atop a lake. The king tosses away all his underlings and his own daughter to save his own hide, only to realize that the lake itself is a blob-like entity that consumes him. Adkins' work is barely noticeable on this story, making it look like a Sutton solo story.

Our next story is "The Quest!" by Rich Margopoulos (story) and Chic Stone (art). A man comes across an old man in the park who gives him a painting of a girl tied to a pole as a three headed monster approaches her. That night he looks at it and is suddenly summoned to another world. The same old man says he has summoned him here to rescue his daughter from the vile king Moloch. So begins a lengthy quest where the two of them make it to Moloch's castle, but our protagonist is killed by the three headed beast. The old man returns to the park with his painting, hoping to find someone else. Sword and sorcery tales were never a favorite of mine in Warren and its the same here in Skywald, one of the weaker stories of the issue.

Next is "Dream Planet", written by Phil Seuling and drawn by Serg Moren. A spaceship approaches a planet and its crew has some very weird dreams. One man dreams of being on the planet and being enveloped by a blob-like creature. Another dreams of being attacked by leaves, ferns and fungus. A third dreams of being seized by a giant caterpillar, spun up in a web and has eggs hatch out of him and eat him. The scientists on board the ship believe these are visions that are being used as a defense of the inhabitants of the planet. They believe the inhabitants are physically quite weak. So the ship lands on the planet. The rather confusing last page implies that the monsters on the planet were real after all. At least that's my interpretation of it.

The issue concludes with the rather weak "Valley of Blood" by Chuch McNaughton (story) and Jack Katz/Frank Giacoia (art). A couple, Bart and Valerie head to a mysterious temple in the Himalayas. On the way they are warned by a man, Dargos, about a vampire castle and find a dead vampire skeleton in the ruins of the temple. After getting into a car accident, Valerie is found to need a blood transfusion and gets one from Dargos. The two of them then disappear. Suddenly vampire attacks from a pair of vampires start occurring. Bart eventually comes across the vampire woman, staking her and Valerie turns back to human, dying. Dargos then appears and attacks him.
Posted by Quiddity at 7:11 AM