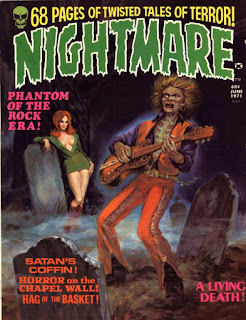 Harry Rosenbaum provides the cover for this issue of Nightmare, cover dated June 1971.

First is "Phantom of the Rock Era" by Chuck McNaughton (story) and Ralph Reese (art). A young woman, Lala, sees Roddy Skeane, a guitarist and singer perform at a club and decides to hook her ride to his, thinking he will eventually become famous and she can take advantage of his fame and fortune. Lala is rather disgusted by his ugly face, but is convinced he will become famous and loves the lavish lifestyle she is hoping to get for them. Eventually Roddy reveals the rest of his band to Lala, and she finds out they all had died in a witchcraft ceremony and have been resurrected from the dead! Roddy wants her to join them permanently and sacrifices her so she can come back from the dead like them. I wasn't the biggest fan of this story, but Reese does a great job with the art. I am not the most familiar with him, he did one Warren story from around this time and had another printed many years later, but that was it for him. He'll do some more strong work coming up.

Second is "Shoot-Out in Satan's Coffin" by Mike Jennings (story) and Jack Abel (art). Newlyweds Holly and Keith find themselves in the desert out west on their honeymoon, spotting some ghosts playing a poker game in a tavern. Holly ventures out in the desert where she is captured by some prospectors who have found uranium, as well as a mutated Gila monster lizard who has grown to giant size! Keith had followed Holly and gets captured as well. They eventually flee to an abandoned town where they come across the ghosts playing poker again who save them from the prospectors. But the Gila Monster and other creatures are still around, leading to our protagonist's demise. I didn't particularly care for this story, the weakest of the issue.

Next is "The Mad Mind Doctor!" by Chuck McNaughton (story) and Dick Ayers/Mike Esposito (art). Dr. Streichman is a psychiatrist with a unique method of treatment, beating on his patients, which include a man who thinks he is a werewolf and a woman who thinks she is a vampire. A young colleague of his, Moran, tells him he's going to report him, causing Streichman to kill him and dump his body in the ocean! He soon is confronted by Moran's resurrected corpse, the werewolf, the vampire and another cleaver wielding patient. It was good to see Streichman get what was coming to him, but the structure of this story is rather odd in that the ending is revealed on the splash page!

Next is "A Nightmare Pin-Up #3". After being absent from Psycho #3, the one page feature returns, drawn here by Bill Everett. This features a beast like man with a bat like face attacking several people. Everett's work on these one page features have been quite strong.

Fifth is "Hag of the Blood Basket"!" by Al Hewetson (story) and Tom Sutton (art, credited by Sean Todd). The Hag of the title appears visually inspired by the Old Witch, one of the 3 hosts from EC's 1950s horror comics. Sutton was obviously a fan, and would eventually do a story for Warren that was a tribute to Graham Ingels, the artist primarily responsible for drawing her. Anyway, this lengthy story (a whopping 16 pages!) tells the journey of the Hag of the title as she is initially executed during the french revolution, with her head chopped off in the guillotine. We witness her lengthy journey into hell, the various creatures and monsters she encounters there and her desire to escape, only for the story to end with her headless body being chained up in an insane asylum. This story didn't always make the most sense, but the journey was worth it, and Sutton does a great job with the art work. I also felt kinda bad for the hag, she got a bit of a raw deal.

Next is "A Living Death" by Gary Friedrich (story) and Tom Palmer (art). A woman, Lauren Barker, dies after an encounter with her boyfriend, Derek. Lauren's brother Sam blames Derek for her death and gets upset when he attends the funeral. In reality, Derek is leading several possessed women whom he has brought under his thumb and has doing evil deeds for him like stabbing people or shooting them. Sam gets his lover Sandy to go undercover and try and become Derek's girlfriend, but she puts off his advances long enough for Sam to show up. Derek is revealed to be a vampire and is staked to death. Derek and his group of women kinda remind me of Charles Manson, making me wonder if this story was inspired by the real life events that would have happened not too long before this issue came out. The fact that Derek was a vampire I could see from a mile away.

Last is "The Horror on the Chapel Well" by Gardner Fox (story) and Serg Moren (art). A young man, Orsino, summons the devil due to the Duke seizing his lover, Isabella. Orsino is eventually brought before the duke and finds Isabella has killed herself due to only loving Orsino. The Duke tells Orsino that he will spare his life if he can paint the entire wall of a large wall with holy scenes, in just a single day, believing it to be an impossible task that will give him an excuse to kill him. With the help of the devil, Orsino paints the entire wall, although with monsters and demons. The devil has painted one creature in particular that will come to life if Orsino dies. Orsino is killed on orders of the duke, and the monster comes out of the wall, killing him. Every night there after, the monster comes out of the wall and the screams of the Duke can be heard again. The concept of this story reminds me a lot of the Clive Barker novel "Coldheart Canyon" which involved a painted mural whose monstrous inhabitants would come to life.