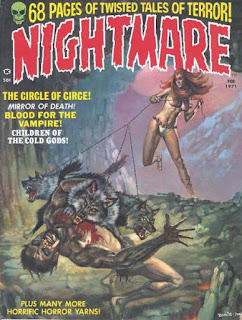 Time for Nightmare #2, another issue filled mostly with reprints. The cover for this issue is from Boris Vallejo, who did several covers for Warren and will do a number more here for Skywald.

First is "Children of the Cold Gods" by Ross Andru and Mike Esposito (story and art). With the Earth becoming overpopulated, mankind seeks to cryofreeze people and then colonize other planets. Dr. Bradford is in charge of the procedure, and is woken up to tend to the cryogenic controls which have sunk far past safe temperature levels. Bradford is devastated to see his frozen fiance broken up into many pieces because her body has become so brittle! But the temperature continues to sink further, to a level so cold that a mysterious being that calls itself one of the Gods of the Cold is able to interact with our reality. The "Cold Gods" put back together the body parts of those broken into pieces via cryosleep, causing some monstrous creatures. But by lowering the temperature so far down that air itself becomes a liquid he is able to permanently freeze the monsters.

Our second story is "The Phantom of Philip Hawks" by A.C. Hollingsworth (art). A ship's crew comes across an abandoned ship in the ocean, the Mary Kane. Upon going on board they find various dead bodies including that of a couple. They find the log of the ship as kept by the woman, Mary Kane. The log tells of how she and her husband got married and her father built them the ship. However a man named Philip Hawks desired for Mary, and got killed after being beat up by her husband. He cursed the Mary Kane as he lay dying and it resulted in the death of everyone on the ship. Suddenly Hawks' voice and a spectral image of him appear, forcing the men to flee the Mary Kane on their life boat just in time. The Mary Kane continues to sail the sea, haunted.

Third is "The Mirror of Death". The handsome Steve Lajos returns to shore while at sea. He goes to a club where he meets a woman but once alone beats her to death, selling her jewels for money. Upon another stop ashore, Lajos comes across a temple of Mirrors, made to honor the God Struga of the Seven Hands. It is said the mirror reveals the appearance of a man's soul. Lajos goes inside, finding his reflection in the mirror to be extremely ugly and monstrous. This causes him to believe the mirror and temple are phonies. He kills the guide there and smashes the mirror. But when he tries to go outside he realizes he is stuck in the mirror held by Struga. While a rather brief story, I did find the reflection of Lajos to be quite ugly and scary, good job by the uncredited artist.

The following story is "The Circle of Circe!" by Gardner Fox (story) and Syd Shores/Mike Esposito (art). On the Isle of Crete, the slave Ulysses is defeated in a tournament and forced to head to the Isle of Aeaea to find the Golden Tusks of Atlas. Ulysses and 100 of his fellow slaves head there, many dying on the way. When they reach Aeaea, a giant dragon grabs Ulysses and brings him before the beautiful Circe, who wants him for her husband. Ulysses refuses, causing Circe to turn one of his fellow slaves into a wolf, then has a snake attack him. Suddenly Ulysses' mean arrive, leading to a big battle. Circe puts a stop to things and transforms Ulysses and his remaining men into wolves, then she and her fellow women also transform into them. She reveals she is from the Star System Omega, where their males died out many years before in constant warfare. They have searched the universe and are now taking Ulysses and his men to be their mates.

Next is another one-page Nightmare Pin Up, this of the Creature of from the Black Lagoon, as drawn by Bill Everett.

Next is "Time Stop", the text story by Art Stampler. It is quite the rarity for the text story to be the best story of the issue in a comic/magazine, but that's the case here! The story starts off as a cliche mummy story as our protagonist goes to Egypt along with Dr. Vetry and his daughter Vera, digging into the pyramid of a priest of Anubis. Upon coming upon the mummy, they find it alive and our protagonist hits it with an axe, stopping it. All of a sudden things start to go really bonkers. The mummy is revealed to be some sort of robot and Vetry reveals himself to be an alien! He is Wheete Frippe from the planet Freim V, a race that had immortality but whose council decided to impose mortal lives because society became stagnant. Frippe rebelled against this, stealing a teleportation device and heading to Earth to find the secret of immortality from the priest of Anubis. He is attacked by our protagonist, who suddenly finds himself transported to another realm where those of Frippe's race convince him to stop him, giving him the power to absorb Frippe's attacks. Our protagonist returns and kills Frippe. It is then that Vera, revealed to be Frippe's teleportation device reveals yet another big twist, that Frippe was the only sane member of the council that decided to give up immortality. The council had decided to end immortality for all but themselves, robbing their subject's life and Frippe was the righteous one. Our protagonist discovers he has doomed the universe and commits suicide. Wow, this story had several great plot twists; its funny, as I hit this text story and found it to be the longest one yet (unlike previous ones, not even having any images), I pondered skipping it, especially as the prior two were massive busts, but I'm quite happy I didn't. In fact I'd say this is the best story we've had so far as part of my Skywald coverage.

Next is "Blood For the Vampire" with art by Norman Nodel/Vince Alascia (art). The small town of Ravennes in the Alps is haunted by a vampire, Eric Lustveg. The story then brings us into a lengthy flashback as we see how Eric grew up, but was a cruel boy, as if he was possessed by the devil. Upon growing up he kills a guest at the inn he works at and when he's about to be hung instead slits his own throat and rises as a vampire. When people try to put a stake through his heart they find his body missing. Back in the present, a young couple named Rod and Dot Blair head to Ravennes and upon exploring find a vampire's coffin, with Eric inside. They are saved due to the dawn and Rod stakes Eric. But the villagers tell him he should have only staked him once, not several times, so Eric rises again to continue sucking people's blood. Quite a flimsy excuse there at the end to enable Eric to continue his reign of terror. Coming after the best story of the issue is the issue's biggest flop.

Our next story is "The Massacre of Mankind!" This story tells of how mankind got overthrown by its robot slaves. The story takes place in a society where robots are responsible for various menial tasks and are rated based on their performance. It begins with the wedding of Alan and Nara, who are called by Alan's father who is worried about the fact that higher graded robots are responsible for the robot factories. They head to the factory trying to see the robot in charge and Alan's father is let in, only to be killed. The robots refuse to listen to any orders from Alan or Nara, and then the robots start running amok. Humankind is forced to flee into caves and hope they can one day fight back against the robots. Oddly enough this story just ends in the middle of things, making me wonder if we will get a second part in a future issue. Although since this is a reprint story and Skywald is soon to move to all new stories, I doubt that we will get anything further.

The issue concludes with "Pressed for Time" by Marv Wolfman (story) and Dan Adkins (art). Ephram Knowles is killed after having his body crushed by rocks. However he suddenly finds himself in a courtyard, alive again, being accused of witchcraft. As witnesses speak against him, we flash back to how Ephram was obsessed with obtaining eternal life ever since he was a boy. Over time he committed various nefarious acts and eventually is able to summon the devil, who agrees to make it so his days will never end. Back in the present Ephram is sentenced to death by having his body crushed by rocks. He then realizes that while his days will never end, he will be reliving his own execution over and over again. While a rather "eh" story whose ending I saw coming a million miles away, it did have a rather unique method of execution by putting him between two boards and stacking so many rocks on the top one that it crushed him.

This is another story dominated by reprints, with "Children of the Cold Gods!", "The Circle of Circe!", and "Pressed for Time" being new stories along with the one page pin-up and text story. One more issue of reprints to go (Psychos #2) and we can finally move into all new material.
Posted by Quiddity at 7:46 AM