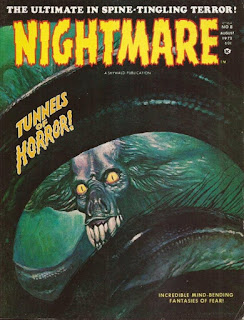 Vicente Segrelles provides the cover for this issue of Nightmare, cover dated August 1972.

We start with the frontis "Andras, The Grand Marquis of Hell" as drawn by Pablo Marcos. Andras is a owl-headed humanoid wielding a large knife and riding a fierce looking wolf!

First story is "Snowbound!" by Ed Fedory (story) and Felipe Dela Rosa (art). Dela Rosa, making his Skywald debut here, would go on to be one of their most prolific artists, I believe being outpaced only by Pablo Marcos and Ricardo Villamonte. His style takes a lot of getting used to. Lots of detail, but often quite ugly looking characters. I didn't care for his art at all at first, but he has started to grow on me. In any case the premise of this story is that a ship is trapped in the Antarctic, being completely frozen solid in the water in the dead of winter. The dwindling crew has to resort to killing dogs to eat. The lack of food eventually causes the crew to start turning on each other, and roughly the last 3/4 of the story features the crew killing each other off one after another, with one of them believing it is due to them suffering from demonic madness. A rather so-so ending aside, this is a pretty decent way to kick off the issue.

Second is "Hey Creep: Play the Macabre Waltz" by Al Hewetson (story) and Ferran Sostres (art). This odd story features some people at a concert hall comes across a short, silent old man carrying a violin. Upon asking him to play the violin he does so, but this results in people being unable to control their bodies, they start dancing non-stop and even one woman collapses from the pain. Eventually everyone collapses and the old man departs. As the story ends it is revealed that he was a martian who crashed on Earth and grew frustrated at his lack of employment.

Third is "Rot, Robin, Rot!" by Al Hewetson (story, credited to Jay Wood) and Dan Sevilla (art). This is a brief, 3 page story that tells of how the famous Robin Hood and his merry men are now quite old, 700 years old in fact, and are now in modern times where they come across some hippies riding in a bus. They try to steal from the hippies but upon being told that Robin Head has been dead for 700 years, Robin and all his men immediately disintegrates to dust. While brief, this was a fairly fun story to read.

Fourth is the cover story "The Tunnels of Horror" by Al Hewetson (story) and Pablo Marcos (art). Walking the streets of New York, a woman, Alexandra, comes across a horrifying monster, which has a snake-like form, but a more humanoid-like face. The monster chases her and she flees to the police, who convinces an officer, David, to help her out. Upon finding some slime, Davis decides to go down to the sewers with a shotgun to find the creature, but it immediately grabs him! They are able to kill the creature by shooting it in the face, but as its blood fills the sewer, they get covered head to toe and pass out. They later wake up in a long, foul tunnel, that seems to be moving. They make their way through it, only to find that they had been ingested by the creature's far larger mother! This is quite the strong story, and Marcos provides some great artwork with a truly horrifying looking monster.

Fifth is "Satan's Graveyard" by Al Hewetson (story) and Syd Shores/Dan Adkins (art). Shores is credited as Jim Elder, a pseudonym already used for Pablo Marcos. Friedrich is a horrifyinly ugly looking man who is mocked and disrespected due to his appearance and the fact that he worships Satan. Satan arrives, and provides him everlasting life. Meanwhile the townsfolk have had enough with Friedrich and form a mob, who grabs him and sets his home aflame, then bury him. As the story ends Friedrich finds that he does indeed have everlasting life, but as a spirit, accompanied by many other people. A decent art collaboration here, I particularly like the usage of real life photos in several shots, something that was quite rare. I seem to recall Ernie Colon and Leo Duranona occasionally doing it at Warren. The story on the other hand is quite "eh" and this is the first of two stories in this issue where Satan is summoned to grant eternal life. Both written by Hewetson by the way.

Sixth is "Hung Up" by Bruce Jones (story and art). A man named Jeff has killed his friend Bernie and wife Mary, having beaten them to death with a large wrench. He gets to work pouring kerosene around his New York apartment, then sets the place ablaze. He then throws their bodies out the window, trying to make it appear as if they jumped to their deaths due to the fire. The story then flashes back to how this arose. Jeff longed for Louise, Bernie's wife for years and grew sick of his wife Mary. They started pursuing each other romantically and started sending fake letters from their spouses to each other, trying to get it so they would have an affair themselves. This led to Jeff catching them together at his apartment, as he hoped would happen, and killing them. When Jeff leaves his apartment and returns later, he immediately finds himself arrested however. With all his planning, he got quite unlucky as the beads Mary was wearing around her neck caught around a flag pole just under their apartment. Jones' art is quite strong as usual, as is his story, which shows a level of depth and a twist ending that we would often get from him a few years later when he became a prolific writer for Warren. What I find most interesting about the story though is that most of the characters appear based on real life people. Jeff looks like the artist Jeff Jones (who appeared in Skywald not that long ago), Bernie is the famed horror artist Berni Wrightson, and I would assume that Louise is based on Jeff Jones' at the time wife, who would eventually become an editor at Warren. Although her character doesn't resemble the real life individual as much as Jeff and Bernie do.

Seventh is "The Sting of Death" by Chic Stone (story & art). A man named Otto brings a doctor to his lair, located by a cemetery. Otto is convinced that a soul exists, as studies have found some sort of aura departing the human body at the moment of death. Otto decides to try this out, and locks the doctor in a glass force field after stabbing him, so he can see his soul. Otto's cape mistakenly opens up the force field though, causing the soul to escape. Otto is soon attacked by a wasp and dies after his body becomes covered in welts. It is revealed that the doctor had been reincarnated into the wasp.

The final story of the issue is "The Weird and the Undead" by Al Hewetson (story) and Ferran Sostres (art). A man named Smith works for an advertising agency but isn't too happy at being just a salaried employee. He desires for the devil to appear, only for him to do so! The devil agrees to give Smith eternal life. Smith happily heads outside, only for people to start collapsing around him. Some sort of noxious gas has started spreading around. Soon the city starts getting flooded as well. Smith finds himself the only person left alive and the water continues further up, sinking all of Manhattan underneath it. We then discover that Smith and all of our society is part of a microscopic society on a slide being investigated in a laboratory. Suddenly the scientists in the laboratory notice it is flooding and they die from a noxious gas, so the cycle continues... This was an odd one. It seemed somewhat like two disjointed ideas, the Devil giving Smith Eternal life, and human civilization being microscopic, crammed into one. The end twist of the scientists investigating us on a slide also being microscopic themselves and having the same thing happen to them was totally unnecessary though.

Our issue concludes with a one page pin-up of the Phantom of the Opera by Pablo Marcos.
Posted by Quiddity at 4:39 PM