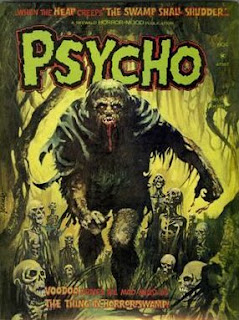 Today I cover Psycho 11, with a cover by Fernando Fernandez, for the interior story "The Thing in Horror-Swamp!". This issue is cover dated March 1973.

First is "...And It Whispered... And It Wept... And it Did Shudder... And it Did Die..." by Al Hewetson (story) and Felipe De la Rosa (art). In Greenwich Village a scientist has created life, a large bizarre tentacled monster and in order to feed it has his hunchbacked assistant kill people to feed to it. The monster thinks the doctor is his daddy and happily eats it. The assistant grows angry at the doctor for not changing him to a more attractive form, so he kills him with an ax to the face! But when he brings the doctor's body to the creature, it grows angry and strangles the assistant. It then starts crying over the death of its father and the narrator tells of how it will soon die without food. A fairly decent way to start the issue and a good example of how over the top Skywald story titles can get!

Second is the two pager "...Make Mephisto's Child Burn..." by Ed Fedory (story) and Felipe De la Rosa (art). This is the most horrifying Skywald story yet! In Jersey England, a pregnant woman is burned at the stake, being called bride of the damned by the angry mob. While burning alive she gives birth, being able to push the baby out of herself to safety, just beyond the edge of the flames. One of the women in the crowd promptly grabs the baby and throws it into the flames to die along with its mother.

Third is the latest in The Heap series, "A Ship of Fiends" by Al Hewetson (story) and Pablo Marcos (art). Where we last left Jim Roberts, he was on a n island with no way to make it home. However a pirate ship soon arrives with a number of pirates burying their treasure. They capture Jim and tie him up on the mast of the ship. Jim hopes to turn into The Heap so he can escape, but when night comes, he doesn't transform! Suddenly a giant squid (guessed by Jim to be the one from the story in Psycho #7) appears and destroys the ship. The Heap is tossed ashore in the Everglades where he comes across Darkkos Mansion (which is explained to be the mansion from the story "The Beast Within" from Nightmare #9). There werewolf from that story is still around and does battle with The Heap, with them falling into quicksand and only The Heap making it out. Marcos' art looks considerably weaker in this story, as if he was rushing it.

Fourth is "...Rast Their Evil Bones..." a one pager from Ed Fedory (story) and Antonio Borrell (art). Fedory brings us a second burned at the stake story in the same issue! It features the burning of witches in Sweden and that those killed included children. Considering what we just got earlier in the issue this seems completely pointless to me. Thankfully it is only one page, and Borrell's art is pretty good.

Fifth is another one pager, "Her Majesty - The Corpse" by Ed Fedory (story) and Juez Xirinius (art). It tells of the queen Inez De Castro who was the target of assassins. Her husband Dom Pedro brings her corpse onto the throne where her subjects are still forced to kneel before her and kiss her feet.

Sixth is "Hit and Run: Miss and Die" by Doug Moench (story) and Xavier Villanova (art). A night watchman is knocked out when some mobsters come to steal some drugs from the pharmaceutical company he works for. When they meet up with their boss, he angrily tells them to take out the watchman as he could identify them. They capture him and bring him before their boss, now angry that they have brought the watchman to him , as well as the fact that the drugs stolen were useless. The mobsters create cement shoes and also dump in the drugs into it. Our protagonist is tossed into the water where he drowns and his body starts to decompose. However the drugs are able to somehow revive him. He bites off his feet at the ankles, then pursues the three mobster, tying them up and causing them to drown from their own bootlegged liquor. A typical rising corpse type story, but the incompetence of the mobsters was pretty funny.

Seventh is "Don't Die Up There, Stanley" by Al Hewetson (story) and Jesus Suso Rego (art). This is Suso's Skywald debut. While he doesn't do the most outstanding job on this story, Suso is quite a strong artist. After having done a couple of stories for Warren he comes to Skywald where he becomes a pretty prolific artist and one of their best. This story features a comedian, Stanley, who comes to a club in Staten Island to perform. He soon discovers from his manager that he is going to be performing in front of freaks, which causes him to panic because that is exactly what his act is about! He tries to get out of it, but is unable to. Rather than hold back, he goes full force and the freaks love it, asking him to joke more and more. Stanley then wakes up and thinking it was all a dream goes on a rampage. In the final panel however we find that his performance was real. He is now in a loony bin, while the freaks look on at him sadly, as he was the one person to treat him like everyone else. Apparently Stanley was based on a real person that Hewetson knew.

Eight is "The Thing in Horror-Swamp!" by Al Hewetson (story) and Pablo Marcos (art). This story is described as the origin story for Darkkos Mansion, which was previously utilized in The Heap story from this issue and "The Beast Within" from Nightmare #9. Edwin Gunn comes to the swamps of New Orleans to visit his friend Eldridge Harlowe. Along the way some locals try to stop him, saying he is going towards the house of voodoo. When he arrives at the mansion, Edwin meets up with Eldridge, as well as his wheel chair bound father Register and beautiful sister Mayline. Edwin starts talking about the voodoo and finds out from Eldridge that his father is the local voodoo priest! From here on things take a crazy turn. Mayline runs for some unknown reason and falls into the quicksand to her death. Angry about it, Register is able to cause Edwin to fall in as well. But the voodoo practitioners revive Edwin as a rotting corpse and he attacks the mansion, first strangling Eldridge then attacks Register who is able to drive Edwin back into the quicksand, but the remaining locals are able to throw Eldridge into the quicksand as well, killing him and ending the local voodoo practice. Marcos' art is a lot better here and this story is quite good once it hits the bloodbath of the second half.

Ninth is "A Bag of Fleas" by Al Hewetson (story) and Jose Gual (art). This is Jose Gual's Skywald debut. He was a pretty good artist who did a fair amount of work for Warren as well, including one issue that was exclusively stories from him. Reggie Whyte is an old custodian who watches as the apartment building he has lived in nearly 30 years is destroyed by a wrecking ball. In flashbacks we see his brief marriage including the conflict with his wife that led to her leaving, and the landlord coming in to tell Reggie that the building is being destroyed to make room for a parking lot. To try and stop this, Reggie kills his landlord with an ax and also arranges it so the wrecking ball falls off and kills several people. Reggie is found in the wreckage near the body of his wife, and we find this is the real reason why he din't want the building destroyed, as he killed her and walled up her body in the wall. But on the final page as he is brought into a police car we find out hat there were several other skeletons in the building. He was not the only murderer! A fairly decent story and debut here for Gual.