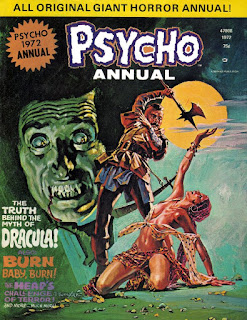 Today I will be covering the Psycho 1972 Annual. Unlike Warren's Annuals, which were all reprints, this is actually full of new stories! It is cover dated August 1972 and features a cover by Pujolar.

The frontispiece for this issue is "The Horned Goat of Satan" drawn by Pablo Marcos.

First story is "Lucifer Awaits You!" by David Anthony Kraft (story) and Xavier Villanova (art). This story features a pair of hitchhikers. They are initially picked up by a woman and her grown daughter, but eventually leave them off. They are then picked up by a photographer, who foolishly tells him he travels and his employers don't know where he is at any given time. They kill him and steal his car, but eventually drive off the road. They wake up in a dark place and are picked up by another car, driven by a monster as they are now in hell. I could see the ending of this story coming from a mile away based on the title and the splash page.

Next up is "Burn, Baby Burn" by Len Brown (story) and Carlos Garzon (art). This story takes place in an apartment complex owned by a man named Mr. Griffon. Bad things keep happening to the tenants due to Griffin's lack of care of the building. A little girl gets bit by a rat in the basement. A woman's baby dies when she goes out for groceries due to a gas leak. When Griffin arrives to collect rent on the first of the month, his tenants take him captive and then get to work on making repairs in the building. They finally let him out and lead him upstairs where they show the new incinerator they have installed, throwing him in it to his death. I recall a very similar story in Creepy in issue 63, called Fire Trap if I remember correctly that had a cruel tenant being taken captive and burned alive by his tenants. I wonder if that story ripped this one off.

Third is the latest Heap story, "What Hath Hell Wrought?" by Al Hewetson (story) and Pablo Marcos (art). The heap has washed up on the shores of Cape Cod and is suddenly grabbed by a tentacle coming out of the ocean. The Heap fights it off and makes his way to shore, finding the monster, a sort of jellyfish like creature pursuing him. He heads towards a nearby village, fearful for what the monster will do to it. While heading there a father and son spot him and flee. More monsters approach and the Heap decides to fight them off and help the village. He burns the nearby forest then grabs a hold of the multiplying monsters, eventually smashing them into the ocean until they break up. Meanwhile in the village, the father and his boy warn the village of the horrible monster, the Heap.

Next is "The Myth of Dracula" by Al Hewetson (story) and Ramon De la Fuente (art). Fuente was the brother of the more well known Spanish artist Victor de la Fuente. This is his sole Skywald appearance. This isn't a traditional fictional story, but rather is a historical account of the historical figure who inspired Bram Stoker's Dracula, Vlad IV of the country of Wallachia (now Romania). The story tells of his upbringing, the fact that he was put in as a puppet ruler of his country once his father was killed, and then gets into some stories of the horrible things he would do such as by having a party at his castle and bringing his guests down to the basement where he tortured some captured gypsies. He then turns on one of his own guests, biting at her neck. Eventually Vlad, who would go by the name Dracula passes away due to disease. This non-traditional story was an interesting one to read. I wouldn't mind more features like this.

Fifth is "...Blind Fate" by Ed Fedory (story) and Francisco Cueto (art). This rather confusing story has a man who I think may be a humanoid alien (or talks as if he is one with how much he curses humanity for what they've done to the planet). He travels through time, being in a swampy area where an eel like creature attacks him. He stumbles along, falling down before a number of walking people, who are revealed to be aliens. The last panel shows one of them coming across him, with braille appearing in the panel. This confusing mess of an ending seems fitting for what is a story that made little to no sense whatsoever

Sixth is "The Cursing of Captain Skull" by Gardner Fox (story) and Steve Hickman (art). This is a rather lackluster pirate tale, for which I'm not sure why it appears in a horror magazine. The Captain Skull of the title gets angry at his men for wanting to plunder a nearby town and take its women. He fights said men and gets thrown overboard. After being in the ocean with sharks for a while he comes across another ship where a beautiful woman whom he calls Joanna is tied to the mast. The two of them head to nearby land and by rubbing phosphorous over themselves trick Skull's old crew into thinking they are ghosts. Skull and the men who fought against him battle, with him eventually defeating them. Skull decides to gather up that which remains of his crew and Joanna stays with him. This story doesn't even give us a twist ending! I am hoping this is not the start of a series.

Next is "The Furnace of Hell" by Robert Kanigher (story) and Amador Garcia (art). Edwin and Rita are firebrands, spirits who appear like flame ridden humans. Any human they grab a hold of will burst aflame until their death. And that is exactly what happens at the start of the story as a young couple bathing on Buzzard's cape are found and killed by them. Later, a young woman studying witchcraft investigates the area, including their bodies. She meets Edwin who brings her to his home to meet Rita as well and claims he has books she may find useful. She discovers a book there that shows the burning of the stake of the two many years before. The house suddenly bursts aflame and Rita has her burned alive, jealous of Edwin pursuing her. Amador's art in this story reminds me a lot of that of Jaime Brocal, an S.I. artist who did a decent amount for Warren around this time, although I don't believe ever worked for Skywald.

The final story of the issue is "Birth Announcement" by Al Hewetson (story) and Ramon Torrents (art). In this brief four page story, a man is anxious as his wife is about to give birth. He thinks of how he met his wife when he saw her swimming in the coast of Cape Cod. His wife is soon revealed to be a mermaid, and she has given birth to a large number of eggs which they bring home with them, waiting for them to hatch. A rather predictable ending to this story, but Torrents' art is excellent as usual. The story is said to take place in the town of Winchester by Cape Cod, but as someone who lives in Massachusetts, I can say the town of Winchester is actually nowhere near Cape Cod.

The issue concludes with a one page skeleton pin-up by Pablo Marcos.
Posted by Quiddity at 4:25 PM