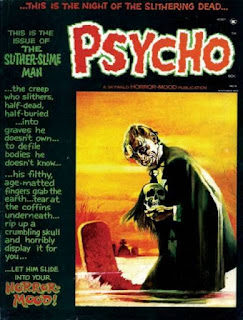 Domingo Gomez provides the cover for this issue of Psycho, featuring the character Slither-Slime Man. This issue is cover dated November 1972. Skywald continues to hit its stride, giving us a strong issue.

On the 2 page title of contents page we also get an introduction from the Slither-Slime Man drawn by Pablo Marcos.

Its "The Slither-Slime Man" yet again in the first story of the issue, written by Al Hewetson and drawn by Pablo Marcos. We meet him on the first page as he digs up a corpse, strangles it then grabs a hold of the skull. The sheriff gets frustrated with the grave being dug up, something which has happened before and visits the head of the local asylum, Fillius, thinking it is one of his patients. They take a hold of one of them, who likes to pull the heads off of rats, but when another grave is defiled they realize its not him. The sheriff thinks it may be Fillius, and when they come across him shoots him dead. Later than night he comes across an old crippled man in the rain, at his wife's grave and beats him to death with his crutch. He makes the mistake of standing on the grave of the real Slither-Slime Man, who rises up out of it and strangles him, pulling his head off. A fairly decent story with some good art by Marcos, but the character of Fillius looks just like the Slither-Slime Man which led to some confusion on my part.

Second story is "The Ghastly Reunion" by Doug Moench (story) and Ramon Torrents (art). Gene is concerned that his young wife Bonnie is in love with Steve, a hired hand on their farm. He plots to "accidentally" kill Steve while hunting, shooting him with an arrow. He then buries his body. Bonnie, who really was in love with Steve, finds and digs up his grave, causing Gene to bury her alive with him.  Gene soon finds both of them out of their grave and attacking him however. It is revealed that Steve was a vampire, and while the arrow should have killed him, by burying Bonnie alive with him she was able to pull it out and turn her into a vampire as well. Torrents as always provides a really strong art performance, and we get a fairly strong story as well.

Third is "...Suffer the Little Children" by Al Hewetson (story) and Xavier Villanova (art). This story is identified as being a sequel to the 1891 novel Turn of the Screw by Henry James. A new governess arrives at a mansion to take care of two young children, Flora and Miles. She soon finds out from the maid that they are emotionally disturbed children and their brother had died just a few months ago. The governess soon starts seeing ghosts. She is told more by the maid, who reveals that Flora and Miles actually murdered their older brother Thomas because he was their father's favorite. She also claims the former governess, Jessel, and the butler, Peter were evil people. Peter eventually beat Jessel to death and then hung himself. Upon bringing up Thomas to the children, Miles and Flora get upset at the governess, and then the ghost of Peter appears. The governess realizes the children are possessed and brings them to their father. After she leaves, we realize the truth, that Thomas' spirit has possessed their father, and that Miles and Flora are in fact possessed by the spirits of Peter and Jessel. A bit over complicated, but I enjoyed this story quite a lot as well.

Fourth is "A Plot of Dirt" by Doug Moench (story) and Felipa Dela Rosa (art). Philip Davoren rises from his grave as a rotting corpse and is compelled to go to the home of a man named Craig. Craig is standing in a pentagram and has summoned Philip back from the dead in order to make him suffer. He orders him to go to the home of a woman named Mary. We soon realize that Mary was Philip's lover when he was alive, and her rejection of Craig in favor of Philip caused Craig to kill him. Philip has been ordered to kill Mary, but refuses to do so. He instead returns to Craig's home and by causing a chandelier to fall, crushes and kills Craig. The authorities then arrive and attack Philip with a flame thrower, burning up his body entirely, which holds a rose he held towards the story's beginning. I enjoyed this story quite a lot and consider it my favorite of the issue. Dela Rosa's often ugly looking art suits the story quite well and I enjoyed seeing a story told from the perspective of a revived corpse.

Fifth is "A Question of Identity!!!" by Ed Fedory (story) and Zesar Lopez (art). The first five pages or so of this story take place in a dream state as a woman is getting harassed by a pair of spectral like beings, and sees visions of a dark castle and her parents. She awakens, the two spectral beings in fact doctors who were restoring her lost memories. A vampire, she immediately goes on a rampage, biting the neck of one of them and when she is stabbed in the neck by a knife she escapes by jumping out the window. Eventually the sun arrives though, causing her entire body to burn up. While the plot of this story isn't the easiest to follow, Zesar provides a considerably strong art job, as I would expect for him.

Sixth is "Voodoo Initiation", a one page feature from Al Hewetson (story) and Pablo Marcos (art), which I presume was originally intended to be a frontispiece. It covers how to summon a demon and join a voodoo ritual.

Seventh is "The Graveyard Jungle" by Al Hewetson (story) and Juez Xirinius (art). Jay and Skip are a couple of schemers. They have come up with a plot to sell a house to a man, then fake ghosts and evil spirits in it, which will cause the man to get scared and sell it back to them for pennies on the dollar. That night they head to the house, to find it haunted for real! They are pursued by a traditionally hooded ghost, a number of spooky hands, rats and other things, eventually finding the man they sold the house to, with horns! He is revealed to be the devil, having purchased himself a home on Earth.

We wrap up with "All the Ways and Means to Die" by Jeff Jones (art, adapted from All the Myriad Ways by Larry Niven). This story focuses on the concept of alternative timelines, that each and every possible choice that is made opens up new possibilities and hence new timelines. With so many possible ways things can go there are billions of possible time streams. This story focuses in particular on a man named Gene Trimble as he thinks about the various possibilities. As the story ends we see him holding a gun, and the different possible time streams including one in which he shoots himself in the head. This story is a bit convoluted and more focused on the concept than necessarily a plot, but it is an enjoyable one. Jones provides some particularly strong artwork.
Posted by Quiddity at 7:06 PM