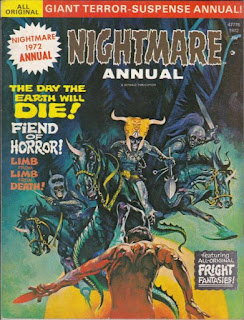 This time I'll be covering the Nightmare 1972 Special, cover dated November 1972 with a cover by Fernando Fernandez, one of my favorite Warren artists. He never does any interior work for Skywald, but will do more covers.

The frontispiece for this issue is "Behind the Myth of the Bridge of Dracula" by Al Hewetson (story) and Juez Xirinius (art). It tells of Countess Elizabeth Bathory, who lived in Hungary in the 16th Century and would murder and bathe in the blood of women she had killed.

First story is "The Strange Case of Dr. Jekyll and Mr. Hyde" by Al Hewetson (story) and Juez Xirinius (art). This story is an adaption of the famous novel by Robert Lewis Stevenson. The monstrous Mr. Hyde stalks the streets of London, including beating to death a little girl. Meanwhile Dr. Jekyll shocks his colleague by wanting to leave everything in his will to Mr. Hyde. As we soon find out, Dr. Jekyll and Mr. Hyde are the same person, created via a formula that Jekyll has created to bring out his alter ego. Chaos ensues with Dr. Jekyll eventually killing himself and Hyde by jumping out a window. I have not actually read the original novel so I don't know how faithful an adaption this is, but am at least familiar with the concept. I was a bit surprised that they got through it all so quickly.

Second is "A Macabre Fact of Life: The Indian Rope Trick" by Al Hewetson (story) and Ricardo Villamonte (art). This two page feature is the Skywald premiere of Ricardo Villamonte, who would go on to become Skywald's most prolific artist. This feature tells of the Indian Rope Trick whereby a rope can raise on its own into the air and someone can climb up it. Yet this has a horrific turn as the boy climbing it goes into a cloud and his dismembered body parts start falling out. The boy is soon revealed to be unharmed though, it being just a hypnotic effect the magician was having on the audience.

Next is "Beauty is Only Skin Deep" by Doug Moench (story) and Fred Carrillo (art). Taking place in the time of the French revolution, a woman named Countessa believes that she can restore her fading youth and beauty by slaying beautiful young women and bathing in their blood. Her servant Morde does the act of killing for her. The viewpoint then shifts to one of the young woman, who awakens, finding herself captured and in the Countessa's castle. We follow her as she makes her way through the castle, eventually coming across some of the slain victims. Morde takes a hold of her and brings her to the Countessa. The Countessa has found that her blood baths have not worked, and believes that the beauty escapes once her victims' blood leaves their bodies. She believes by having this girl killed without marking her skin, it will work. Morde soon brings the Countessa the woman's slain, unmarked body and drinks her blood, only to discover that Morde poisoned her and dies herself! This was a pretty good story with some Gothic art by Carrillo. A Filipino artist, he would do a fair amount of work for Warren, but not until near the end of Warren's life in the early 1980s. The Countessa seems directly inspired by Elizabeth Bathory, who had appeared in the frontispiece for this issue.

Fourth is "Limb From Limb From Death" by Al Hewetson (story) Pablo Marcos (art). Three men are trapped in the Sahara desert after their jeep runs out of gas. As days go by they start getting desperate and one of them, a doctor, says that they have to start eating each other or else they will starve to death. The doctor convinces the other two to have an arm sawed off before him, claiming that if they are saved he too will have an arm taken off. He proceeds to saw an arm off both his comrades which they eat, but they are then saved by a traveling plane. Now back in civilization, the doctor is afraid of the fact that he'll have to have his arm sawed off and decides to fake things, sending his fellow survivors the severed arm from a dead body. Yet pain starts growing in his arm, and he soon finds it rotting away and falling off. As the story ends we find that his arm didn't really fall off, but he's gone crazy and is being brought to the loony bin. Skywald continues to rely a bit too heavily on the last minute twist of things not being real (in fact this story is very reminiscent to Sand Castles from Psycho #6, both with its plot and ending, and both stories were drawn by Marcos), but the story does deserve some points for how over the top gruesome it is.

We next get another segment in the Nightmare World series, "A Grave Beneath the Sea!" by Al Hewetson (story) and Bill Payne (art). This story is based on the nightmare of a reader named Joseph Elliot. Joseph imagines himself on a boat in Scotland where the Loch Ness monster appears and he is pulled underwater, near the monster's offspring. But Joseph is able to ride the monster away, soon realizing however that he is sitting on an octopus! Eventually the monster brings him to the beach where he gets off of him. Like the previous Nightmare World story you need to know going in that based on a dream, the story is going to be a bit nonsensical and that is the case here.

Next is "Alone" by Bruce Jones (story and art). This story features a woman named Karin who walks home from work in New York City only to start receiving phone calls about how she is going to die. The calls continue and the caller eventually reveals that he was a hypnotist at a part she had recently gone to named the Great Konar. He has hypnotized her such that she will commit suicide by jumping off a building, much like his brother did due to her dumping him. Eventually the time comes for her to jump, but it is revealed that Karin had moved to the first floor and is perfectly okay. Bruce Jones is quite good at his twist endings and we have a good one here. His art continues to be really strong, making me feel a bit sad that he eventually turns to being just a writer.

After that is "And If A Fiend Should Come A Callin'" by Al Hewetson (story) and L.M. Roca (art). Roca was actually the first S.I. artist to appear in a Warren magazine and makes a rare appearance here for Skywald. The story features a student getting handed a piece of candy called a Green Gargoyle by an older man. Upon consuming it the boy finds himself pursued by monsters and makes his way to a cave where an actual gargoyle is waiting for him. He tells the gargoyle about the man and how he is providing samples to various other kids for free, and then they can get more by paying for it. The boy confronts the man saying he has some friends that also want the candy, but really brings him to a the gargoyle, who appears as a fluorescent fiend in the woods, and kills him. The candy in this story is quite obvious drugs. The gargoyle featured appears to have no relation to the gargoyles in the several prior Skywald stories.

The issue concludes with the cover story "The Day the Earth Will Die!" by Al Hewetson (story) and Ferran Sostres (art). We see a film being made where the star is in a fantasy world with skeleton-like robots attacking him while riding flying horses. When the skeletons start running amok though they realize that they are actually real! Chaos ensues and even the military has to get involved! As the story hits its conclusion, we find that even the "reality" of this story was actually a film being made, by a race of ant-like aliens! Quite the bizarre finish to this story, and the issue.
Posted by Quiddity at 5:40 PM