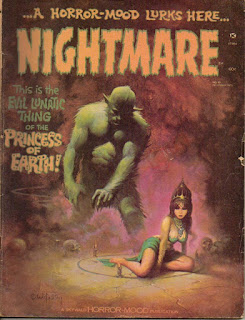 Edit: In hindsight looks like I screwed up on the order of what comes next and mistakenly skipped Nightmare #9 and Psycho #9! Enjoy this for now and I'll be back in a couple of days with the correct issue. One of the down sides of having a back log of a couple of issues.

Ken Kelly provides the cover for this issue of Nightmare, featuring the interior story "Princess of Earth". This issue is cover dated December 1972.

The two-page table of contents contains art from Pablo Marcos, featuring characters such as Mr. Pook, the Gargoyles, Frankenstein's Monster, Dracula, and Phantom of the Opera in line for movie tickets!

The first story is "Princess of Earth" by Al Hewetson (story) and Pablo Marcos (art). Eggs come out of a computer terminal in a space ship. One of them hatches, revealing a small, humanoid but furry creature. The narrative turns to a woman named Lisa, a celebrated singer. The creature, now in its adult form departs the swamp where it lives and heads to the theater where Lisa is performing. There, the creature bursts through the place and grabs Lisa, dragging her with him, saying she is a princess who has left them alone far too long. The creature drags her back to the space ship where it is revealed she was a part of the spaceship and had been tasked with taking care of the eggs, much of which had smashed during her absence. She is now forced to remain on the ship, tending to them.

Next is "The Funeral Barge" by Al Hewetson (story) and Juez Xirinius (art). A detective named Walter Crowd investigates a mysterious barge that travels across the waters, carrying corpses on it. On a rainy night he pretends to be a corpse and is tossed aboard along with other bodies. The barge travels across the water, making its way to a giant castle. Once inside, a crane starts grabbing a hold of the bodies and bringing them in where a series of vampires start feasting on them. Walter uses a lit torch to fight back and make his escape, but he eventually is overwhelmed and is forced to become a pilot for the barge. Xirinius' art is quite strong here. His full page feature where we first see the castle is particularly impressive.

The third story is "Satan's Cellar" by Al Hewetson (story) and Ferrer Maitz (art). This is Maitz's sole story for Skywald. A mother gets some meat from the butcher Louis Hokay and the family is disgusted by it. She returns to complain to Hokay who simply gives her back her money and tells her to go some place else. The mother gets the police to raid the place, hoping to find him serving dogs, rats or other rotten meat but they find nothing. She continues to pursue it though, eventually sneaking in and finding a variety of human body parts in a hidden chamber under the floor. Hokay arrives and tries to kill her but she kills him with a cleaver. All of a sudden a pair of many armed beings climb out of the hole in the floor and kill her. The narrator claims it was the meat of these creatures they were eating, and also that these creatures will now be pursuing food themselves. Some so-so art here, but the ending came out of left field, which I enjoyed.

Fourth is "The Proverbial Killer" by Doug Moench (story) and Xavier Villanova (art). Michael Reidy is attacked constantly by his wife Janet, who is convinced he is having an affair because each month he disappears for a short period of time. Michael denies such claims. She seeks to divorce him and get paid alimony. It is soon revealed that she is the one having an affair, with a man named Augie, who also plans on conning her too. When he blabs this to one of his friends, the friend feels guilty and goes to Michael to reveal it. Michael doesn't believe it though. He heads home where he catches Augie and Janet together. He reveals the truth to them, that when he was disappearing he wasn't having an affair, but its because when the full moon comes he turns into a werewolf! Michael is a rather milquetoast character (and modeled after director Woody Allen) but it was good to see him get Janet and Augie in the end.

Next is "A Macabre Fact of Life: Demonic Possession" by Al Hewetson (story) and Pablo Marcos (art). A man in public starts flipping out, claiming to be possessed by a demon. We see that this is the case, as another man had summoned Satan and requested the man to be possessed by a demon. Returning to the scene in public, the man grabs an axe and goes on a rampage, eventually being captured and put in an asylum where a exorcism is done on him and the demon leaves him. Not much of a plot to this brief 4 page story.

Next is the one page "Game of Skill" by Joan Cintron (story) and Maelo Cintron (art). I got these credits from Richard Arndt's "Horror Comics in Black and White" as the story itself is just credited as "Cintron and Kinsman". In prehistoric times this page questions what would have happened if the first humans to fight against other beasts lost and baboons instead became the dominant species on Earth. Not much of a story here, but strong art from Cintron. Reminds me a little of Luis Bermejo.

Another entry in the "Nightmare World" series is next with "They Crawled out of the Crater" with Al Hewetson adapting the dream of reader Trisha Hamlin. Lara provides the art. Trisha dreams herself being shown on TV as she departs to space in order to head to the moon. However a hole is ripped into her ship, causing her to be sucked out. She is pulled down to the moon's surface where she must first escape some quicksand then is grabbed by some furry humanoid beings. They seek help as some spider creatures attack them. She then realizes that the furry creatures are in fact aligned with the spiders. She is then suddenly shook awake by a policeman and the story ends. Its too bad, this story ends a little too soon, I was interested at seeing what would happen next! Lara is another artist with his sole Skywald appearance being this story, which is too bad as he did a pretty good job.

Next is "Black Communion" by Ed Fedory (story) and Felipe Dela Rosa (art). Within a monastery, Satan summons a sword wielding corpse to rise and start attacking the monks. Called Don Carlos, the corpse slays many of them with ease. He is eventually done in when a monk trips on the stairs, causing some holy water to spill through the floorboards and fall upon him.

The Human Gargoyles series returns with "1 and 1 Equals 3" by Al Hewetson (story) and Maelo Cintron (art), taking over for Felipa Dela Rosa. The two Gargoyles, Edward and Mina Sartyros give birth to a child, whom they call Andrew. They come across a traveling circus and travel with them. While taking a rest however, Andrew is displayed to the public and kidnapped. Andrew is held by a Satanic cult and brought before Satan himself. Satan claims to have breathed life into each of the gargoyles. Edward attacks him, there is a big explosion and the gargoyles get up and depart with Andrew, thinking about whether they should depart Europe and head to America. A so-so story with fairly strong art; it seems mind boggling to me that the Gargoyles would leave their child with strangers, a rather dumb way to move the plot along.