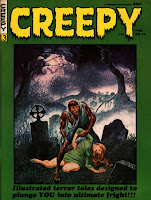 Gray Morrow provides the cover for this issue of Creepy, from February 1967.

First is "The Squaw" by Reed Crandall (art) and Archie Goodwin (story). This story, which is an adaption of a Bram Stoker story features a man who kills a kitten by accidently dropping a rock on it. The mother of the cat follows him as he goes to see a torture chamber and steps into an Iron Maiden. The cat jumps at the tour guide holding the iron maiden open, resulting in it shutting on the man, killing him.

Second is "Early Warning!" by Jerry Grandenetti (art) and Archie Goodwin (story). A man gets off a bus in a town late at night and is unable to get into a hotel. In an alley he finds a dead woman's body and is blamed by a crowd as being a vampire. They plunge a stake into his heart, killing him. Suddenly the man wakes up, revealing this to all be a dream. He gets off the bus he was on into the town and everything happens exactly as it did in the dream up until when he finds the woman's body. He tells them he's not a vampire and that if they get a mirror he can prove it. But it doesn't do him any good, as the crowd is all vampires, and they kill him.

Third is "Scream Test" by Angelo Torres (art, his final Warren appearance) and Bhob Stewart & John Benson (story). A young reporter goes to see the owner of an old theater, who tells her of how he rised through the ranks from usher to owner of the theater. The owner is obsessed with Lon Chaney and also speaks of something that happened to him in his past. When he starts playing the organ the reporter removes a mask he was wearing, revealing his horribly burned face. Some very nice art here, including some photographs from Lon Chaney movies as well.

Next is "Madness in the Method" by Rocco Mastroserio (art) and Archie Goodwin (story). Our protagonist, Henry, murders his wife and convinces everyone, including the court that he is insane. He finds the insane asylum he's put in unbearable though, and admits to the murder, wanting to be sent to prison instead. The doctors there refuse though, only permitting him to take part in a test to see if he's normal. Unfortunately for him, that results in them taking his brain out of his body.

Fifth is "Fear in Stone" by Eugene Colan (art) and Archie Goodwin (story). A sculptor is upset at the fact that he isn't successful. A critic tells him of a fellow sculptor who is very successful. Our protagonist goes to see his work and finds his sculptures to show people in absolute terror. After witnessing a homeless man he sees the sculptor with become the next sculpture, our protagonist breaks into his home where he finds how he does it, he possesses the head of Medusa! Our protagonist is turned to stone and becomes just another sculpture.

Sixth is "Adam Link, Gangbuster!", the latest Adam Link story by Joe Orlando (art) and Otto Binder (story). In this story Adam is disguised as a human and eavesdrops some mobster who have framed Eve for murder. He also finds that a local councilor is involved. While he is caught, he fakes death and makes it out of there. He records the councillor incriminating himself, but the tape is destroyed. He then confronts the councillor, making him confess in writing, but a grenade destroys his legs and his body is destroyed. Is this the end for Adam Link? You'll need to check out his next story, in Creepy 15 to find out.

Last is "Second Chance!", with art by Steve Ditko and story by Archie Goodwin. This story is about a man who makes a deal with the devil to stay alive longer. The devil brings him back to life, but he ends up being stuck in a coffin! Luckily for him a gravedigger digs him out, but upon seeing this 'corpse' come to life, he kills him, which finishes him off for good.
Posted by Quiddity at 6:40 PM