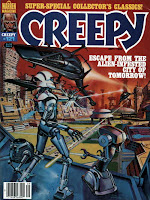 Jim Laurier provides the cover for this issue of Creepy, cover dated September 1980. This story is an all John Severin special.

First is "A Toast to No Man's Memory" by John Severin (art) and Len Wein (story), from Creepy 92. A group of pilots, including a young newbie, Babbit agree to save a bottle of wine for the last one of them that lives. The pilots slowly start dying in battle, much due in part to Babbit's cowardice. Eventually the last one of them is shot by Babbit himself when he threatens getting him court martialled. Babbit drinks the wine, but it ends up that the last of the pilots poisoned it, so it kills him.

Second is "The Star Saga of Sirius Sam" by John Severin (art) and Nicola Cuti (story), from Creepy 95. Two men come to meet Sam of the title to head to an alien planet and steal a gem which they hope to use to keep alive a woman who is the wife of one of them and the sister of the other. They head to the planet, which is ruled by chimps. They find the gem, but discover it is only made of glass, the real one was taken long ago. The glass substitute is destroyed while they are there. They are able to escape safely by using the glass eye of one of the men to replace the destroyed substitute.

Third is "Battle Rot" by John Severin (art) and Bill Dubay (story), from Creepy 81. A soldier tells another soldier of corpses rising back to life. His fellow soldier doesn't believe him, but when he crashes his plane into a hospital, he comes across just that!

Fourth is "Professor Duffer and the Insuperable Myron Meek!" by John Severin (art) and Bill Dubay (story), from Creepy 100. Duffer of the title introduces Myron Meek to a top Hollywood agent and he makes it in Hollywood as a comedic actor, although he never speaks. It ends up that Meek is a robot. Meek has fallen in love with the robot from Metropolis, so they are able to find her for him, and he heads off for good with her. A nice comedic story with some good art from Severin.

Fifth is "Angel of Jaipur" by John Severin (art) and Bill Dubay (story), from Creepy 89. This story features a young pilot flying a plane who goes back in time and manages to save his father from a military assault. Despite there being some sceptics, the gun marks on his plane are proof enough that it really happened.

Sixth is "Visit to a Primitive Planet" by John Severin (art) and Bill Dubay (story), from Creepy 105. A pair of aliens come to Earth, but find the people in a small town they arrive in not moving at all. It ends up that they arrived at a test site for a bomb and are soon all killed because of it. A nice story with very little dialogue.

Last is "Warrior's Ritual" by John Severin (art) and Archie Goodwin (story), from Creepy 112. Taking place in the 1930's, a group of troops come across a base full of dead people. There they find a diary from a dead man with a missing heart. The diary tells of a young soldier who is obsessed with fighting, sneaking out of the base to kill more people each night. Eventually it is discovered that the young man is obsessed with eating other's hearts, thinking he can get their courage from it. In the present, he meets his end after trying to eat his own heart! Some very good art by Severin here, one of his best looking stories.

Hey,
Are you interested in a link exchange whit alternativecomix.blogspot.com?
If so pls email me at planetexpres12@yahoo.com, and make sure you put your blog adress in the subject.Good Luck.I hope to hear from you soon.