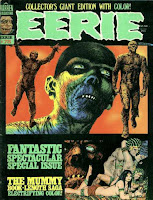 This issue is an all reprint issue featuring the Mummy Walks series. The cover is a montage of colored panels from the stories within, by artist Jaime Brocal. This issue is dated October 1976. This issue shifts things around a little bit, moving the first story in the series to the end, and starting things with the second story in the series. In addition, the three crossover stories with the Werewolf series are all skipped.

First is "The Death of a Friend!", by Jaime Brocal (art) and Steve Skeates (story), from Eerie 49. This story takes place in Boston, where Jerome Curry occupies a mummy using the amulet he found and kills a couple. His girlfriend's brother is a witness to the murder, but by the end of the story, the mummy walks again and claims him as another victim.

Next is the "The Mind Within" by Jaime Brocal (art) and Steve Skeates (story), from Eerie 50. This segment gives us some background info on our protagonist, Jerome Curry, about how he found the amulet he used to become the Mummy, and about his desire to kill the various women who have spurned him in the past. When thieves steal the amulet however, Curry might find himself trapped in the Mummy's body forever!

Third is "Ghoulish Encounter" by Jaime Brocal (art) and Steve Skeates (story), from Eerie 52. Jerome Curry, now permanently stuck in the mummy's body due to the theft of the amulet, pursues the thieves who stole it, leaving his human body in a graveyard. He finds the thieves, but the amulet is already gone, taken by a woman who was with them. Meanwhile his body is found by a crazy woman with a taste for human flesh. Upon his return, finding his mostly eaten body, the Mummy kills her on a spiked fence. Luckily for him, it was actually another body she had eaten and his body is unharmed. Brocal's art continues to be amazing in this serial.

Fourth is "Enter Mr. Hyde" by Jaime Brocal (art) and Steve Skeates (story), from Eerie 53. Jerome Curry, in the body of the mummy continues to pursue the woman who holds the amulet that can return him to his human form. During this story he encounters Mr. Hyde, a beast like man who has transformed from a normal human. The mummy defeats him and continues on his way.

Fifth is "Stranger in a Village of the Insane!" by Jaime Brocal (art) and Steve Skeates (story), from Eerie 54. The mummy, traveling on a train, is knocked off after a fight with a man aboard. He arrives in a village in Massachusetts filled with lunatics. In the middle of the town he comes across a large building where a demon lives, which he fights and defeats. The whole place comes crashing down, killing everyone but him. In its original run, this was the last Mummy story with Brocal as the artist (and Brocal's last Warren appearance). With the order of things switched around here, there's one more story left.

Sixth "...And An End!", with art by Jaime Brocal and story by Steve Skeates, from Eerie 48. This story is in color, provided by Bill Dubay, and is significantly rewritten from its original appearance, with a few pages removed as well. In this version the Mummy is at the site of an archeological dig where he continues to regain his amulet and go back to his human body. In the end he is burned and killed. The movement of the first story in the series to the end makes things quite confusing, although was probably done to provide more of a resolution to the series that wasn't present the first time the series was printed.

Last is the non-Mummy story "The Hope of the Future" by Jaime Brocal (art) and Doug Moench (story), from Creepy 57. Some very nice art by Brocal in this pencils only story. It features a man barricaded in a house, surrounded by evil children who are trying to get in. He eventually gives in and heads downstairs where the children, including his son, await him.