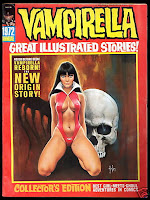 Today I take a look at the 1972 Vampirella Annual. This issue is supposedly rather rare, but I was lucky enough to get a copy for not that much money a while back. The cover is by Aslan in his only Warren appearance. This cover was originally intended for Vampirella 1, but was instead passed over for the famous cover made by Frank Frazetta for that issue. The inside front cover features "Vampi's Feary Tales: The Bride of Frankenstein" by Tom Sutton.

First is "The Origin of Vampirella" by Jose Gonzalez (art) and J.R. Cochran (story). This story features Vampirella on Drakulon with her lover Tristan. The planet is dying and while Vampirella seeks to kill animals for their blood, Tristan doesn't want to do so, nor does anyone else, resulting in the people all dying off. Eventually people from Earth arrive on Drakulon as well and end up killing Tristan, He rises up again however and confronts Vampirella one last time before she heads to Earth.

Next is "The Curse of Circe" by Jerry Grandenetti (art) and Gardner Fox (story), from Vampirella 6. A man is lost at sea and ends up landing on an island, populated by beautiful women, the most beautiful of which is named Circe. After a night of passion, he wakes up, to find that he's been turned into a pig! With the help of another woman he is able to return to his human form and the two escape, only to end up dying while at sea.

Third is "Goddess From the Sea" by Neal Adams (art) and Don Glut (story), from Vampirella 1. Adams' art is pencils only. A woman, Lanora, appears outs of the sea and tells a man who lives nearby that she's from Atlantis and is fleeing from those of her kind. Her fellow sea dwellers soon come out after her and grab ahold of her. He heads into the sea after her and ends up drowning.

Fourth is "The Curse" by Wally Wood (story & art), from Vampirella 9. A man has no memory of his past and finds himself in a bizarre reptilian man like form. A beautiful woman, Zara, tells him that he's been transformed into this state by a sorceress that they need to kill using an enchanted sword. Our hero fights off many beasts and eventually the sorceress herself. It ends up however that Zara was the one who transformed him, as she was given eternal life and wanted to die, which could only be done by killing the sorceress. After her death our hero turns back into his true form, a lowly lizard.

Fifth is "Snake Eyes" by Jack Sparling (art) and Nicola Cuti (story), from Vampirella 8. It's about a girl who has very snake like features, and she looks more and more like one as she gets older. She gets angry with her boyfriend and kills him when he sells a pendant of hers. It ends up that she is the decendent of royalty. She gets it back and uses it to get to a secret chamber, where she is confronted by a Mongoose man who was responsible for wiping her family out.

Sixth is "Vampi's Feary Tales: Love!", a one page feature from Tom Sutton.

Seventh is "Forgotten Kingdom" by Ernie Colon (art) and Bill Parente (story). A woman finds an astronaut from a spaceship that lands on her planet. She brings him to their leader, who tells him that all men on their planet have died and that they need him to help restore their civilization. He refuses, and with the help of the woman that found him they escape. He brings her to his spaceship and they leave the planet. He soon reveals however that it is the exact opposite on his world, that there are no women, and he has similar plans for her as they had for him.

Last is another one pager, "Vampi's Feary Tales: Lilith" by Jeff Jones (art) and Nicola Cuti (story), from Vampirella 9.
Posted by Quiddity at 4:14 PM

Good evening: I'm looking for the story of three vampires: one was the mother, her daughter and the grandmother( who was in a wheelchair). This guy thought he was being attacked by them individually and every time he looked in the mirror, no marks on his neck, till the end of the story they all attacked him. Was this in vampirella or creepy or eerie? I remebered this some time in the early to mid 70's, same time the taking of pelham 1,2,3 came out. Thank you for your blogs, they are instrumental in my achieving past magazines I would like to buy.