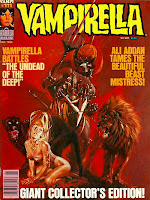 Warren reaches a new low with this all reprint issue of Vampirella from January 1983. The cover, by Pujolar, is actually a reprinted cover from the magazine Devilina, a competitor to Warren! Unbelievable that they'd take a competitor's cover to use for one of their issues.

First is "Vampirella and the Curse of the Macdaemons" by Jose Gonzalez (art) and Mike Butterworth (story, as Flaxman Loew), from issue 28. The Macdaemons of the title are a family who lives in Scotland. As the son of the family comes of age he is forced to watch over the family secret. Vampi and Pendragon come there on vacation and meet Alastair, who tells Vampi of how an ancestor of his was forced to mate with a sea monster. Alastair plans to feed Pendragon to the creature, but when he lets it go, it instead attacks him, jealous over the attention he's paid to Vampirella. Vampirella then bites it in her bat form, killing it. This story is continued with the next story.

Second is "Vampirella and the Undead of the Deep!" by Jose Gonzalez (art) and Mike Butterworth (story, as Flaxman Loew), from issue 29. Vampi witnesses the burial of Alastair, who is being carried into the water. Vampi goes under water where she sees many dead bodies at a ball. She also finds Tristan down there, but he soon transforms into a watery beast after tricking her into getting rid of her blood substitute. Vampi escapes and bites the dead bodies down there to get the blood she needs.

Third is "The Time Eater" by Paul Neary (art) and Jack Butterworth (story), from issue 40. A sci-fi themed story that is very interesting and unique. One of Warren's most unique stories in fact. The Time Eater of the title is an entity that exists out in space, consuming time. As the story begins, the time eater is quickly reaching the point where it has consumed all future time. As a result, it has to start eating the past. We see the Time Eater consumer the past, causing time to go back further and further. A spaceship that approached the Time Eater lands back on Earth, then is deassembled. People who have died come back to life, then grow young, and eventually return to their mother's womb. Humankind de-evolves as does all other life. Eventually the Earth itself ceases to exist and the universe slowly shrinks until it too is gone. At this point the time eater has eaten all time that has ever existed and soon starves to death. A gaseous particle breaks off the time eater, causing the universe to slowly start reforming again. Time once again starts to pass by, the universe slowly returns to normal and the time eater eventually comes back to life to start the process all over again.

Fourth is "The Munificent Ali Addan and Son!" by Esteban Maroto (art) and Bill Dubay & Maroto (story), from issue 68. The art on this story is printed sideways. This story features the son of Ali Addan, who encounters a beautiful woman who has set up a trap for him. He battles a warrior and defeats him, and the woman is revealed to be Ali Addan's daughter. Her mother, a monster appears and kills Ali's son.

Fifth is "Force Feed" by Leopold Sanchez (art) and Cary Bates (story), from issue 59. A killer who is on the run from the police finds a scientist who is able to transport him to someone else's body in another time. He proves it by letting him tempoorarily be in Jack the Ripper. But when they go ahead with transporting him to someone else's body, the scientist, knowing the killer is a vegitarian, has him turned into a Tyranosaurus Rex.

Sixth is "Fog" by Carmine Infantino & Dick Giordano (art) and Nicola Cuti (story), from issue 62. This story features a dangerous fog that chases a couple. They are able to escape from it, but it adapts by turning into a liquid, and getting at them that way.

Last is "The French Coagulation" by Luis Bermejo (art) and Carl Wessler & Gerry Boudreau (story), from issue 39. Bermejo's first Warren story in its original appearance, his art here is simply amazing, arguably the best job he ever did for Warren. In Paris law enforcement investigate the death of a woman at the hand of the "Loup Garou" which is essentially a werewolf. Due to a key in the victim's hands, they are able to pintpoint the creature down to one of six people. They lock them up in jail cells and the night of the full moon one of them, a woman, turns into the werewolf and kills her husband, who is in the cell with her. It ends up the husband was sleeping with the wife of one of the cops which is why he locked him in the cell with her.